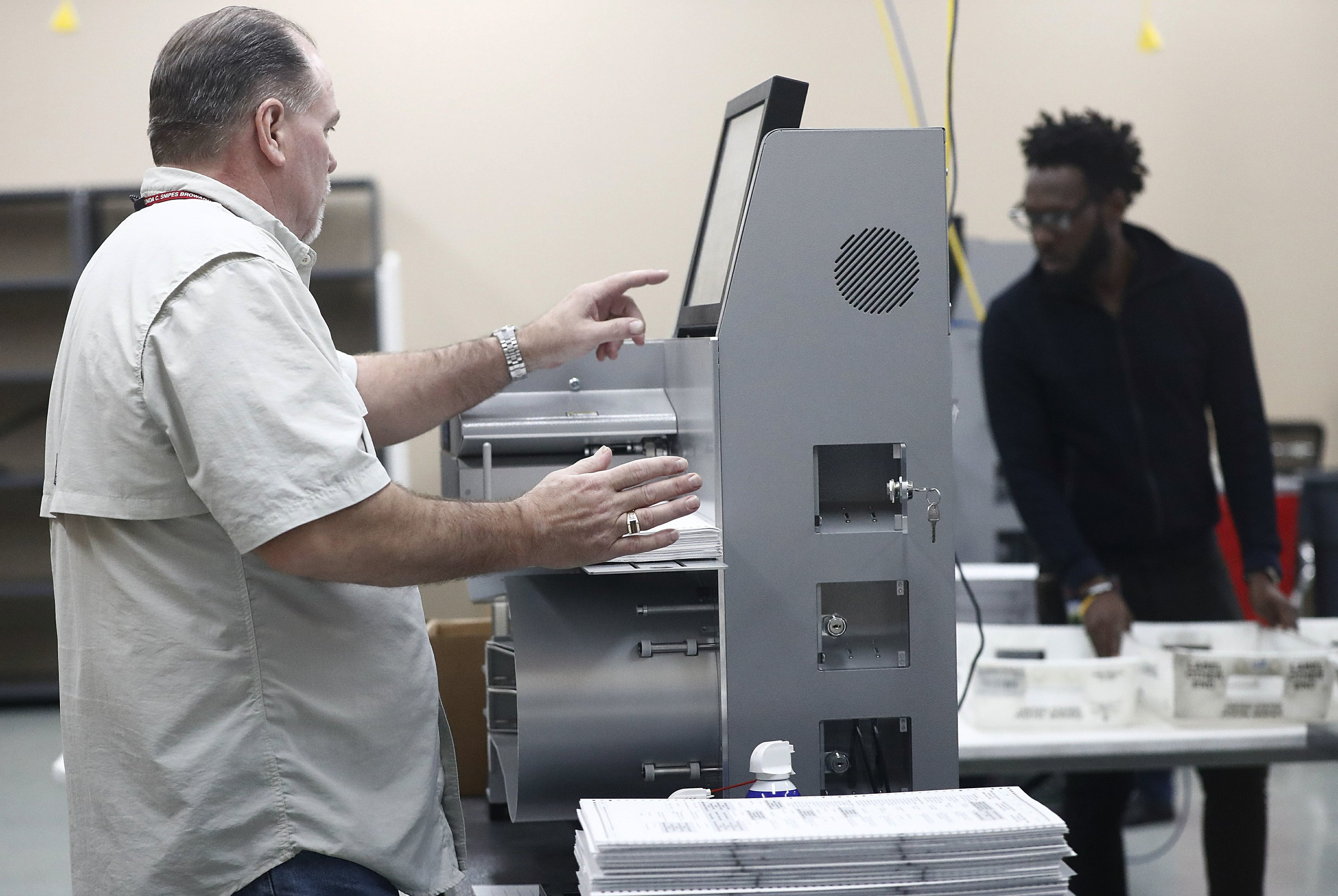 FORT LAUDERDALE, Fla. (AP) — After some early bumps, more than half of Florida’s 67 counties began recounting votes Sunday in the razor-thin Senate and gubernatorial races, bringing back memories of the 2000 presidential fiasco.

In Democratic-leaning Broward County, the scheduled start of the recount was delayed Sunday because of a problem with one of the tabulation machines. The Republican Party attacked Broward’s supervisor of elections, Brenda Snipes, of “incompetence and gross mismanagement” following the delay, which was resolved within two hours.

The county, the state’s second-most populous, is emerging as the epicenter of controversy in the recount. Broward officials said they mistakenly counted 22 absentee ballots that had been rejected, mostly because the signature on the return envelope did not match the one on file. It is a problem that appears impossible to fix because the ballots were mixed in with 205 legal ballots. Snipes said it would be unfair to throw out all the ballots.

The recount in most other major population centers, including Miami-Dade and Pinellas and Hillsborough counties in the Tampa Bay area, was ongoing without incident on Sunday. Smaller counties are expected to begin their reviews Monday, Tuesday or Wednesday. All counties face a Thursday afternoon deadline to complete the recount.


Florida Governor and Senate candidate Rick Scott says he is asking the Florida Department of Law Enforcement to investigate elections offices in Palm Beach and Broward counties, questioning whether they were trying to inflate the Democratic vote. (Nov. 9)


The reviews are an unprecedented step in Florida, a state that’s notorious for election results decided by the thinnest of margins. State officials said they weren’t aware of any other time either a race for governor or U.S. Senate in Florida required a recount, let alone both in the same election.

State law requires a machine recount in races where the margin is less than 0.5 percentage points. Once completed, if the differences in any of the races are 0.25 percentage points or below, a hand recount will be ordered.

As the recount unfolded, Republicans urged their Democratic opponents to give up and allow the state to move on. Scott said Sunday that Nelson wants fraudulent ballots and those cast by noncitizens to count, pointing to a Nelson lawyer objecting to Palm Beach County’s rejection of one provisional ballot because it was cast by a noncitizen.

“He is trying to commit fraud to win this election,” Scott told Fox News. “Bill Nelson’s a sore loser. He’s been in politics way too long.”

Both the state elections division, which Scott runs, and the Florida Department of Law Enforcement have said they have found no evidence of voter fraud. Gillum and Nelson have argued each vote should be counted and the process allowed to take its course.

Florida is also conducting a recount in a third statewide race. Democrat Nikki Fried had a 0.07 percentage point lead over Republican state Rep. Matt Caldwell in the race for agriculture commissioner, one of Florida’s three Cabinet seats.

From a distant glance, the recounts might dredge up memories of the 2000 presidential recount, when it took more than five weeks for Florida to declare George W. Bush the victor over Vice President Al Gore by 537 votes, thus giving Bush the presidency.

But much has changed since then. In 2000, each county had its own voting system. Many used punch cards — voters poked out chads, leaving tiny holes in their ballots representing their candidates. Some voters, however, didn’t fully punch out the presidential chad or gave it just a little push. Those hanging and dimpled chads had to be examined by the canvassing boards, a lengthy, tiresome and often subjective process that became fodder for late-night comedians.

Now the state requires that all Florida counties use ballots where voters use a pen to mark their candidate’s name, much like a student does when taking a multiple-choice test. It also now clearly mandates how the recount will proceed.

Those ballots are now being run through scanning machines in each county for a second time under the watchful eye of representatives of both parties and the campaigns. Any ballot that cannot be read for any of the recounted races will be put aside.

If a race’s statewide margin falls below 0.25 percentage points after the machine count, the state will order a manual recount in each county. At that point, only the rejected ballots for that race will be examined by counting teams to determine if the voters’ intentions were obvious. For example, some voters circle the candidate’s name instead of filling in the ballot properly and some cross out their vote and then mark another candidate.

If either side objects to a counting team’s decision or the team can’t make one, the ballot will be forwarded to the county’s canvassing board, with the three members voting on the final decision. The members are usually the county supervisor of elections, a judge and the chair of the county commissioners.

AP writers Tamara Lush in St. Petersburg and Brendan Farrington in Tallahassee contributed to this report.

For AP’s complete coverage of the U.S. midterm elections: https://ift.tt/2PDSMUt

« The Latest: Florida counties begin recounting ballotsU.S. militia groups plan to form their own caravan at the border – Axios »