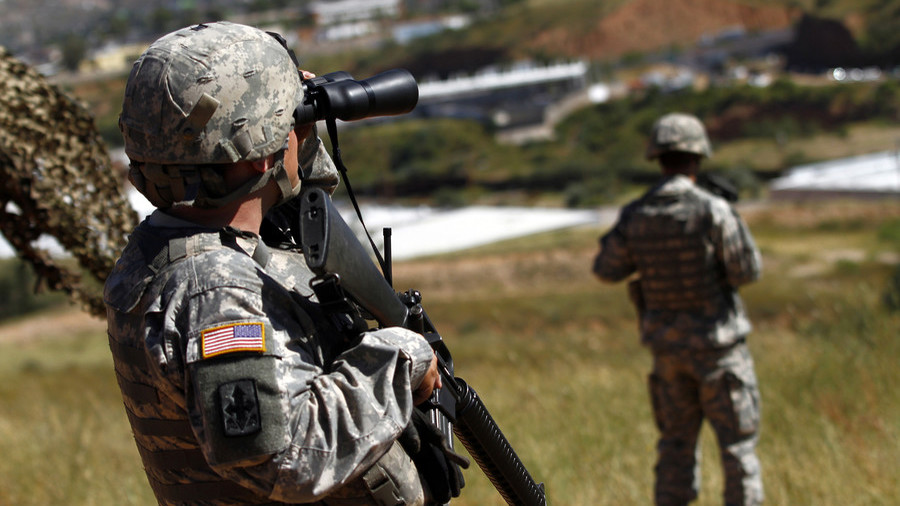 The White House has reportedly issued a memo authorizing troops stationed at the Mexican border to engage in law enforcement duties and use lethal force against illegal immigrants if necessary.


At present, just under 6,000 active-duty troops are stationed at key locations along the US’ 200-mile border with Mexico. The troops were deployed to the border by President Trump as multiple ‘caravans’ of Central American migrants made their way toward the US border via Mexico.

Rather than meeting the migrants with weapons drawn, the troops had been tasked with bolstering the presence of the Customs and Border Protection and National Guard personnel already at the border. Their duties include constructing barriers, and providing reconnaissance and logistics support to the CBP agents.

Now, Military Times reports that the White House signed a memo late Tuesday authorizing the troops to “perform those military protective activities that the Secretary of Defense determines are reasonably necessary” to protect border agents. These activities include: “a show or use of force (including lethal force, where necessary), crowd control, temporary detention, and cursory search.”

Huge scoop from @TaraCopp. White House approves use of lethal force by troops at the border—and crowd control & temporary detention—something that could run afoul of the U.S. law that forbids the military from performing domestic law enforcement duties. https://t.co/KcdSjWg5v7

The “cabinet order” was not signed by President Trump, but by White House Chief of Staff John Kelly. In the runup to this month’s midterm elections, Trump had suggested that rock-throwing migrants at the border might be shot, but later walked back on that statement, saying rock-throwing miscreants would be arrested instead.

The authorization was necessary, Kelly reportedly wrote, because “credible evidence and intelligence” have indicated that the thousands-strong horde of migrants “may prompt incidents of violence and disorder” at the border.

With migrants massed in the Mexican city of Tijuana awaiting their shot at entering the US, Department of Homeland Security officials told reporters on Monday that more than 500 criminals are among the crowds. Tijuana residents have already protested at the growing numbers of migrants in their city, and Mexican authorities have arrested 34 caravan members for drugs and public order offenses.

"I would dare say that not all of them are migrants. Sure, there are some good people — but many are very bad for the city" said the mayor of Tijuana, wearing a #MTGA hat pic.twitter.com/1dufTE4rlo

Even if “violence and disorder” were to break out, the US troops might not be able to use force against the migrants, no matter what the latest order states. The US military is forbidden from engaging in law enforcement duties on US soil by the Posse Comitatus Act of 1878, originally drafted to prevent states being controlled by federal troops.

The military’s rules of engagement allow for units to defend themselves or US citizens against hostile forces or forces that have shown “hostile intent,” potentially providing a path around the limitations of Posse Comitatus, when it comes to lethal force. However, detention and cursory search seem to run afoul of the act’s ban on law enforcement duties.

As such, the order could trigger a lengthy court battle for the Trump administration.