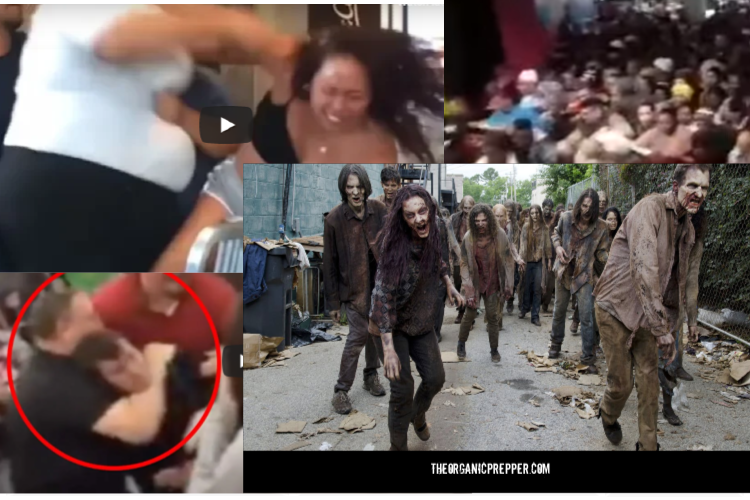 Black Friday 2018 Video Hall of Shame: Keep in Mind They’re Not Even Hungry

If you're new here, you may want to subscribe to my RSS feed. Thanks for visiting!


Well, it’s that time again. Time for our annual Season’s Beatings video roundup. As I like to remind you each year, these folks aren’t even hungry. This year, they’re duking it out over all sorts of things in the Black Friday 2018 Hall of Shame. Seriously, fellow Americans. The rest of the world is looking at us and laughing today.

The good news: there was actually less insanity and fewer brawls than there have been in years past.

The bad news? This round-up is shorter than normal. This even led to online complaints from disappointed would-be viewers. In fact, The Guardian pointed out that the folks who watch the videos are are enjoying “economic injustice.”


There has also been backlash of late against the enjoyment of Black Friday fight videos, which some maintain reflect classism. The Daily Dot website, for example, said in a post it would not be sharing viral fight footage.

“From a privileged position, it’s extremely easy to watch a viral video of a holiday shopping fight, laugh, and then share the video yourself – you’re unaffected by this video and it feels good to assure yourself that you and the people in these videos are not alike,” the post said.

“But … the core issue of these gross videos being circulated for the consumption of hundreds of thousands of hungry eyes [is that] they’re classist, voyeuristic and self-serving.

“We instead act as aristocracy demanding to be entertained by people who are only trying to provide their families with gifts that, without these Black Friday through Cyber Monday discounts, they might not be able to provide.” (source)

Personally, I see Black Friday as a cautionary tale for preppers, a live-action snippet from some future apocalypse full of hungry people in search of food.

From another standpoint, could the lack of frenzy be a sign that retailers are in trouble this year? Sales were expected to be up by $35 billion, but the total remains to be calculated. The media keeps applauding the economy, but I know of more people who are having money problems than are not having money problems.

Watch these folks fighting over the mystery boxes in the first clip. A few of them emerged victorious, while others end up crouching on the floor, stunned. And don’t miss the moment the big-screen TVs are released at 1:09. At 3:02, a man literally leaps onto the backs of other people to try and grab some kind of prize, and the stampede at 4:46 takes out the cameraperson.

In the next video, it starts out strong as the guy at 0:11 goes underneath the other people to get his large electronic item (presumably a television.) Stay sharp, because at 0:20, the redhead slaps the blonde right in the face. Watch the terrified expressions on the faces of the employees at 0:55 as they open the doors and watch as numerous customers get knocked down from the surge of humanity. The fight over a television begins at 2:13 and spills out into the corridor, lasting another 20 seconds. I’m not quite sure who ended up with it.

This video starts out hot, as a guy punches a girl. The woman on the floor from the original ruckus appears to require first aid of some sort. At 0:30, people run into Target, cheering. And running. Literally running. The only time I ever ran in a store was when I was chasing my errant toddler who was trying to make her escape. Later, you can watch the crowd shove the crap out of each other for no reason that I can figure out.

Here are ten clips of folks beating the snot out of each other in shopping centers across the nation. If the scene at 20 seconds doesn’t look like something out of an episode of The Walking Dead, I don’t know what does. Especially at 1:03 when they start falling on an overturned cart and just keep on going. Watch for the headbutt at 1:34. OUCH.

And we’ll finish off with this clip at some pink store to which I never want to go on a Black Friday. “Honey, you’re going to get trampled if you try and get between them and their sales.”

Personally, I avoid these kinds of events like the plague. Here are some great Black Friday sales for preppers that you don’t even have to leave your home for.

Well, what do you think? Anything to add to the commentary above regarding the Black Friday 2018 Hall of Shame?

via The Organic Prepper https://ift.tt/2TFHuxO