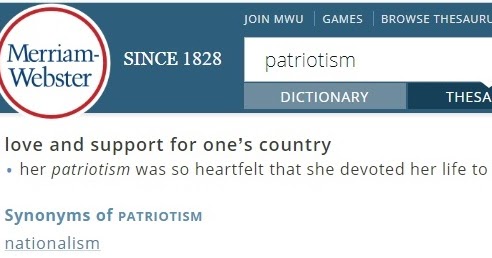 The globalists are desperate. They now face the consequences of their sellout of their nations to a New World Order. Hillary is calling for a moratorium on the flood of migrants because citizens are noticing and voting accordingly. That threatens the powers that be.

But Emmanuel Macron of France, Angela Merkel of Germany, and others who opened the gates of their cities to invaders are lashing back at their citizens for not accepting people of other nationalities who have no intention of assimilating.

They are the settlers. We are the Indians.

The New Speak is "Patriotism is the opposite of nationalism."

That is a lie.

the press said it

But it is still a lie. I don't care if 97% of grammar scientists agree.

Nationalism is a synonym for patriotism

, which by the way, these New World Order tyrants also want to eliminate.

However, if nationalism is so bad then, please, let us divide Europe into a hundred little duchies and the United States into 50 states. Maybe West Virginia could even change its name to something snappy. Shangri-La-Dee-Dah.

But our leaders want one world.

Merkel said in Berlin on Wednesday

, "Nation states must today be prepared to give up their sovereignty, in an orderly fashion of course."

The New World Order people shipped our jobs to China, and then imported millions of people who do not belong in Europe or the United States. Face it, they hate us. The Merkel crowd is lucky that we choose to use the ballot box to make the changes necessary.