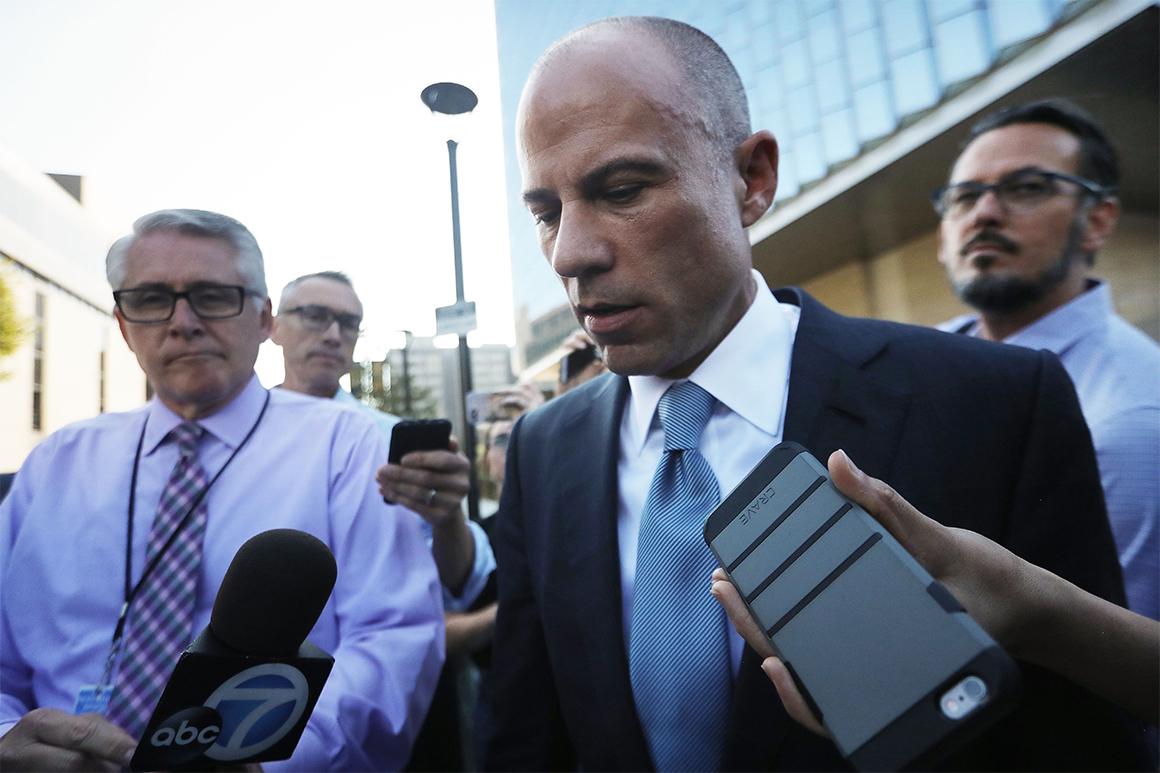 Michael Avenatti’s cable TV bookings have dwindled. He was uninvited from one prominent Democratic event and skipped out on another. Now his highest-profile client is bringing new allegations against him.

In just a matter of weeks, Avenatti’s fortunes have taken a nosedive, rapidly downshifting him from 2020 presidential prospect to political pariah.

“As a friend, I’m concerned about him. When I call him to say ‘Hey, how you doing?’ It’s pretty obvious he’s going through a pretty rough time now,” said David Betras, a Democratic county chairman in Youngstown, Ohio, and one of Avenatti’s earliest political backers. “I’m more worried about these pending charges. Domestic abuse? That’s pretty bad for a run for president.”

The most serious threat to Avenatti’s political ambition is a still-pending domestic violence case in Los Angeles. While the district attorney’s office declined to press a felony charge, the Los Angeles city attorney is still reviewing it as a misdemeanor case.

The race for 2020 starts now. Stay in the know. Follow our presidential election coverage.

“If he had a conviction for domestic violence, I couldn’t see myself supporting him if he runs for office with that on his record,” said Betras.

While Avenatti has overcome his share of obstacles to gain a place in the 2020 discussion, the weight of the latest round of allegations is serving to cement the case against the bellicose attorney in the eyes of those in the party who have long raised red flags about his candidacy.

“The thuggish spectacle is not what the Democratic Party needs right now,” said Patti Solis Doyle, a former campaign manager for Hillary Clinton who has clashed publicly with Avenatti in the past. “We don’t need another Donald Trump. Donald Trump is imploding as we speak.”

Avenatti told POLITICO he will be fully exonerated when the facts and evidence relating to the alleged incident are known. If anything, he said, the conditions for his bid have improved.

“I think the field is shaping up to be even more advantageous for someone like me, not less,” Avenatti said, declining to elaborate. “I think my chances have only gone up, not gone down.”

But it’s clear that the past few weeks have taken a toll. When news first broke of Avenatti’s arrest, the Vermont Democratic Party canceled events that were to have featured the attorney.

One of Avenatti’s recent hires is already leaving after only six weeks. Roger Salazar, a Sacramento-based operative who advised the Bill Clinton White House and Hillary Clinton’s presidential campaign, was helping with communications related to The Fight PAC, the political action committee he launched to pay for his operation.


“Michael’s got a very important voice with respect to holding Trump’s feet to the fire. He doesn’t need me to speak for him. I’m not engaged at this point,” Salazar said Friday. “I’m not working for Fight PAC any longer.”

There’s no stronger evidence of Avenatti’s diminished position than his absence from the debate surrounding former Trump attorney Michael Cohen, who pleaded guilty Thursday to making false statements to Congress in what prosecutors say was an attempt to minimize his talks with Trump about a Moscow real estate project.

Instead of stepping into his familiar role as a dominant presence on the cable news circuit, Avenatti was instead sidelined at the time of Cohen’s bombshell plea.

Avenatti has cut a lower profile since his Nov. 14 arrest on suspicion of domestic violence, an allegation involving actress Mareli Minutti, who later won a restraining order against him. Avenatti vehemently denies any allegation that he was physically abusive, and he refused in an interview to elaborate on his contention over social media that pro-Trump conspiracy theorist Jacob Wohl was somehow involved in his court case.

The misdemeanor case is still outstanding.


“We have received the case and we are reviewing it,” Los Angeles City Attorney’s office spokesman Rob Wilcox said, adding that there is no timeline on the decision.

In another blow, Avenatti’s relationship with the client who helped rocket Avenatti to national fame was recently revealed to be a hot mess.

Daniels last week claimed Avenatti had refused to give her details of how money raised for her legal defense through a crowdfunding site was spent and said she didn’t know about a second crowdfunded endeavor until she read about it on Twitter.

“For months, I’ve asked Michael Avenatti to give me accounting information about the fund my supporters so generously donated to for my safety and legal defense,” Daniels said in a statement to The Daily Beast. “He has repeatedly ignored those requests. Days ago I demanded again, repeatedly, that he tell me how the money was being spent and how much was left. Instead of answering me, without my permission or even my knowledge Michael launched another crowdfunding campaign to raise money on my behalf.”

A spokesperson with the crowd-fund site CrowdJustice said it took down a new page related to fundraising for her legal costs.

“We were made aware via press reports that the new Stormy Daniels case page may not have been approved by the beneficiary,” a CrowdJustice spokesperson said in a statement. “That page has been taken down. No funds from that campaign have been transferred to the legal representative and all pledges made have been refunded.”

Avenatti told POLITICO that Clifford has paid $100 for legal costs that he estimates exceed $1.6 million and insists that he’s given her a “full and complete accounting” of the CrowdJustice fundraising. He contends that it was he who asked the site to pull down the latest page.

One Democrat close to Avenatti said other potential candidates in the field haven’t gone through a similar battle-testing period and that if Avenatti overcomes his latest set of obstacles, he will have demonstrated he can withstand any kind of attack Republicans would bring.

Another Democrat, Iowa strategist Jeff Link, who met with Avenatti before an Iowa event over the summer, said it was too soon to predict the attorney’s political demise.

“If he has an explanation and facts to back up his perspective on this, I think he probably could survive this,” Link said. “If these are credible charges about domestic abuse, I don’t know how you get past those. It just seems like it’s a mounting list of issues that need to be clarified, and that’s always problematic.”


Missing out on the latest scoops? Sign up for POLITICO Playbook and get the latest news, every morning — in your inbox.