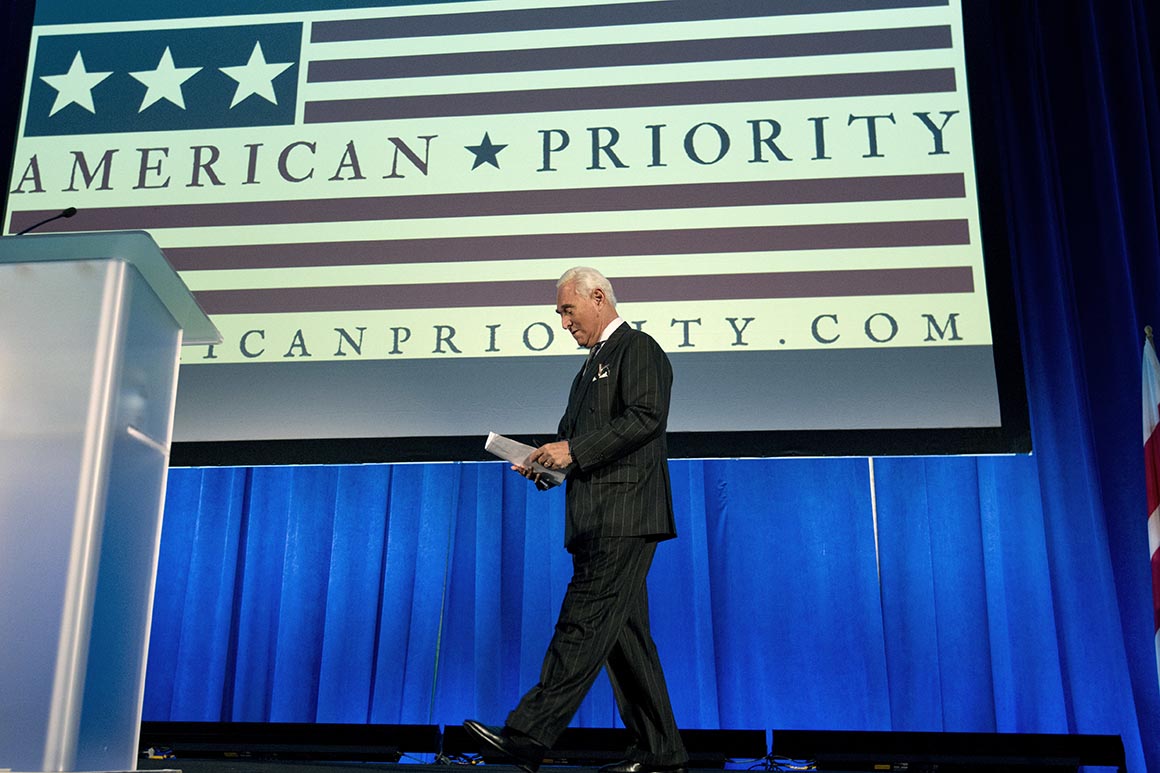 At the first-ever Conservative Political Action Conference in 1974, California Gov. Ronald Reagan addressed a ragtag group of conservative insurgents by quoting John Stuart Mill and nobly declaring, “We are indeed, and we are today, the last best hope of man on earth.”

At the first-ever American Priority conference on Friday morning, Anthony Scaramucci — who served a brief stint as the Trump White House’s communications director — addressed a married couple from Virginia, telling them that the author of the fantastical Internet conspiracy theory QAnon has “been dead accurate about so many things,” adding: “When you find out who he is, you’re not going to believe it.”

American Priority, which brings together an impressive roster of right-wing social media agitators and Trump world notables at a Washington, D.C., hotel, was envisioned as a Trumpist answer to CPAC. In reality, the three-day conference, which convened on Thursday, has been rife with conspiracy theorists, logistical snafus and empty seats.

It may also be the future of Republican politics.

“The right’s turning into a coalition and less of an ideological movement,” said conference co-founder Ali Alexander, a Republican operative and Twitter influence. Rather than organize around belief in the tenets of conservatism — like free markets and traditional family values — American Priority seeks to united anyone who supports American nationalism and opposes establishment elites. In practice, this means supporters of President Donald Trump.

The most reliable politics newsletter.

Sign up for POLITICO Playbook and get the latest news, every morning — in your inbox.

To that end, the conference, which runs through Saturday, brings together top current and former Trump lieutenants with the sort of controversial social media figures whom mainstream conservatives are often eager to distance themselves from.

On Monday, intellectual dark web philosopher Stefan Molyneux, who often sounds off on race and IQ, tweeted a sort of white identity origin myth, writing, “My ancestors were driven out of Africa and struggled to survive winter and hunger…. Now the Africans say we are ‘privileged’ & thieves.”

The invitation of figures such as Molyneux was not an organizational oversight so much as it was part of the conference’s intended goal of defying pressure to expel fringe elements from pro-Trump politics. “It’s a reflection of the real movement,” Alexander said. “Damn the media optics.”

The event was held at the Marriott Wardman Park in Woodley Park, which has hosted several past CPAC conferences. In recent years, that conference has morphed from a modest gathering of misfits into a slick extravaganza with 10,000-plus attendees and is a must-attend event for aspiring Republican presidential candidates now held at a resort in National Harbor, Maryland.

The ascendance of Trump — who bolstered his political credibility with several CPAC appearances in the years before his presidential run — has forced CPAC to make compromises to accommodate a Republican leader who cares little for the tenets of movement conservatism. This year, the event hosted the far-right French nationalist Marion Le Pen, a Trump-style populist and niece of National Front leader Marine. The invitation horrified movement conservatives like Jonah Goldberg, an editor at National Review, who engaged in a Twitter spat with CPAC organizer Matt Schlapp over the invitation.

Despite such accommodations, CPAC, which is put on by the American Conservative Union, has balked at some of Trump’s most controversial supporters. Last year, it cancelled a planned appearance by right-wing provocateur Milo Yiannopoulos after an old recording surfaced in which he spoke favorably of pederasty. This year, CPAC yanked Jim Hoft, publisher of the conspiracy-minded pro-Trump news site the Gateway Pundit, from a panel after he attacked a Parkland shooting survivor.

“You have conservatives who are acting like leftists,” said Laura Loomer, an American Priority speaker and social media provocateur, of CPAC’s organizers. “They care more about optics.”

Such banishments, Loomer, said, highlighted a need for “A less elitist form of CPAC.”

American Priority was created in part to fill that role and to foster American nationalism. In addition to its high-profile speakers, the conference featured talks on marijuana, broadband access, Internet censorship and homelessness.

But some topics remained out of bounds. Dustin Nemos, an amateur conspiracy theorist, said conference organizers pulled his speaking slot after discovering he was a devotee of QAnon.

Despite being pushed off the official agenda, QAnon remained a fixation of many conference attendees. Even Trump’s former White House communications director praised the preposterous theory, which holds that Mueller and Trump, working together in secret, have drawn up 50,000 sealed indictments of powerful pedophiles in order to thwart a deep state coup by Soros, the Clintons, and former President Barack Obama.

At “coffee with Mooch” on Friday morning, the former White House communications director, seemingly unaware of the presence of a nearby reporter, spoke glowingly of the theory as a couple from Stafford, Virginia, showed him their “Q” paraphernalia. (Q is the otherwise anonymous author of the QAnon theory.)

Approached immediately afterward by POLITICO, Scaramucci said his comments were not referring to Q and instead referred to an earlier conversation he had had with the couple about who would succeed John Kelly as Trump’s chief of staff. Then Scaramucci said that his comments should be taken off the record and a conference organizer said the event was closed to the press.

Moments later in the room next door, Kathy Miroy, 58, and her husband, Steve, 66, said they had not spoken earlier to Scaramucci about Kelly or about anything else. “He’s talking about Q,” Kathy Miroy confirmed.

As leaders in the amorphous, social media-driven MAGA phenomenon continue to experiment with the traditional tools of movement-building, they sometimes wield them ineptly, and the conference agenda was often overshadowed by logistical failures.

On Thursday, speakers mostly addressed two- to three-dozen attendees amidst a sea of hundreds of empty chairs in a ball room.

When Stone spoke on Thursday afternoon — condemning Special Counsel Robert Mueller and defending his “iconic” 2016 tweet predicting imminent catastrophe for John Podesta —actual conference attendees were nearly outnumbered by members of the media hungry for any morsel of Mueller news, most of whom dispersed after Stone left, having offered none.

Just days after Loomer attracted worldwide attention by handcuffing herself to Twitter’s headquarters in protest of her banishment from the platform —a setback she has compared to the Holocaust — she spoke to a nearly empty room. After a reporter for the Daily Beast tweeted a photo highlighting the low attendance, Loomer commiserated in the hallway with a conference attendee about “retarded” left-wing reporters and also complained about “self-loathing Jew” George Soros.

Conference participants mostly blamed their problems on the poor planning of conference organizers. “If you’re going to ask people to expend resources to attend the conference, you should ensure the conference will be well-attended,” said Molyneux, who decided to ditch his planned Thursday speaking appearance after seeing how few people were present.

Organizers did little to market the event in advance. Participants also questioned the decision to open the conference on a Thursday. Many events started hours late or did not happen at all.

Conference organizer Alex Philips, whose background is in the Internet service provider business, acknowledged the event’s shortcomings and declined to disclose the number of people who had purchased tickets, which started at $165. He said he plans to hold the conference again in Washington and in cities across the country for many years to come.

Despite the mishaps, participants expressed hope that American Priority would hit its stride in future years.

And they were looking forward to Saturday, when former Trump foreign policy adviser George Papadopoulos is scheduled to show up for an interview, fresh off his release from prison on Friday after serving 12 days for lying to the Federal Bureau of Investigation.

Missing out on the latest scoops? Sign up for POLITICO Playbook and get the latest news, every morning — in your inbox.

« “I Know Where All The Bodies Are Buried”: Clinton Foundation CFO Spills Beans To InvestigatorsMUELLER’s MULTI-MILLION DOLLAR NOTHING-BURGER »