Luca De Ambroggi, the research and analysis lead for AI solutions within the Transformative Technology team at London-based global information provider IHS Markit, told Express.co.uk: “In 50 years, it is reasonable to think that robots will be able to “support” and replace human being in several activities. Already electro-mechanical devices outperform humans in sensitiveness and reaction time.” Considering the vast technological progression witnessed in the last decade, Mr Ambroggi said 50 years was “sufficient” to close several gaps with human being.

He added: “Even if our brain will still have advantages and human beings will remain more dynamic and versatile, electronics will be able to outperform humans in several specific functions, as it does today, from machine vision, to audio/speech recognition.

“Humans have to prevent machines being in a position to replace us, and no one else.

“A few years ago Honhai implemented intelligence machine personnel in their production lines in the same way as computers or other equipment replaced humans 30-40 years back.

“The longer term question is, can the ‘replaced people’ be re-qualified and be allowed to still add value in our society?” 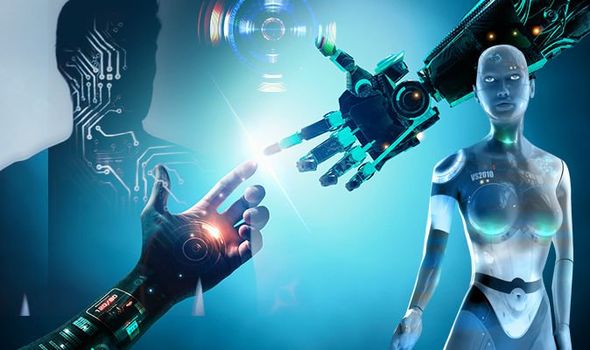 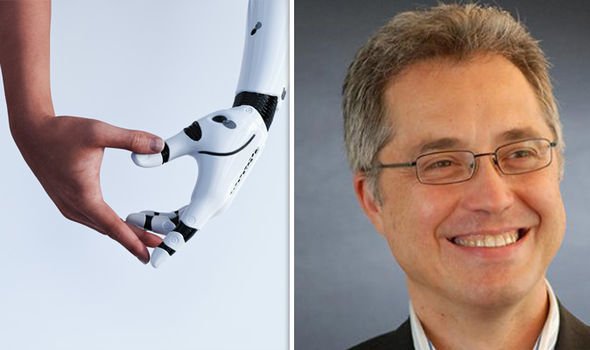 The Terminator series paints a dystopian future of a world dominated by robots (Image: GETTY)


It was vital, he stressed, that mankind set thorough rules and defined boundaries.

He said: “Artificial Intelligence is here, and it’s here for the long haul.

“We are into the so called Narrow or Weak era of AI. It is ‘weaker’ than human or is equal or superior just on few limited tasks and senses.

“However it is disrupting society and as it evolves, it will have major impacts on data security, labour and ethics.

In some ways mankind may relish being replaced by robots, Mr Ambroggi said (Image: GETTY)


“If we fast forward 50 years, science fiction might come easily back in our mind. The difference is that by then we might not consider it anymore ‘fiction’.

“This era is Generic – Multi Modal AI. It is comparable to human intelligence applied in all senses, working powerfully in parallel.

“For example, from the sensing perspective electronics and semiconductor support, to the ability to see, hear, touch, as well as smell and taste with the latest MEMS technologies.

”We need to go back into ethics. It is a common view that AI, and AI-driven devices/robots, will increase business and wealth all over the world.

Mr Ambroggi said in the line between human and robot may eventually become blurred (Image: GETTY)


“It is again up to the regulator and administrator to be sure that all humans will benefit of it and not a few corporations.”

Looking further ahead, Mr Ambroggi considered the idea of robots one day being regarded as having consciousness, and therefore being considered independent lifeforms.

He explained: “This is very possible to be a reality as well, perhaps not in the next 50 years, but technology has evolved so quickly I wouldn't want to doubt it.

“When we study biology, a ‘living being’ has to have at least one living ‘cellular’ unit.

Meet Baxter the robot, who is controlled by human THOUGHTS

“So far it is not the case but clearly this might be overcome in the future. Human intelligence can be enhanced with an AI-Chip implant, but then are we entering new realms and defining what is and what isn’t a hybrid humanoid?

“We should also mention consciousness. We can argue that even consciousness comes from experience, as you see in the human behaviour that is extremely differentiated in the various part of the world.

“If so, AI can and will address it, because experience is replicable.

“Superhuman is the last step, and I fear to use the word last. It is what drives the future of the research.

"Whatever will be above human capabilities. Before that, we better be sure to have in place good regulations, methodologies and ethical processes to ensure to take advantage of the positive side of the technology.”

« Proof that Facebook is going down — despite big earnings‘John Galton,’ American anarchist, shot dead in Acapulco »