Anthem Could Hurt Your Career 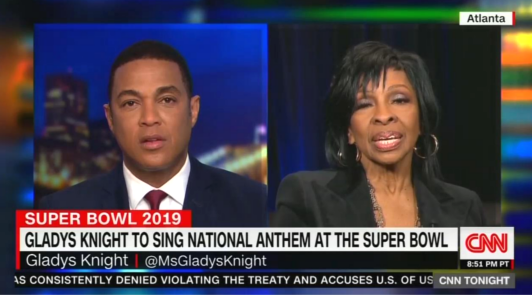 Before music legend Gladys Knight sang the national anthem at Super Bowl LIII on Sunday evening, Don Lemon -- host of the weeknight CNN Tonight program -- told her that another performer “basically lost her career” for singing at President Trump’s inauguration in January of 2017 and asked whether she was running the same risk.

Knight replied that “nothing good comes easy” and asked that listeners remember the “many people” in the country -- and her family -- who have died or are still standing for America. “We have fought hard for a long time, and not just in wars,” she stated.


Lemon began the segment by noting: “A number of artists have reportedly declined invitations to sing at the Super Bowl this year” in Atlanta.

He then played a clip of Mark Geragos, the attorney for former NFL quarterback Colin Kaepernick, who said that anyone who performs at this year’s game would take “a lot of heat, and I think rightfully so.”

Geragos added: “The idea that you're going to basically cross a picket line because that's what they’re doing, crossing an intellectual picket line.”

“They are saying to themselves: ‘I care more about my career than I do about whether what I'm doing is right,’” he continued. “That's taking the short money, so to speak.”

Knight, who is also known as the “Empress of Soul,” responded: “People are going to have their opinions, you know, about whatever.”


All I can deal with right now is what my heart says, OK? I believe in fairness. I believe in truth. I believe in all of those things, and as far as this is concerned, I grew up with the national anthem.

“And we just don't have that anymore,” Knight continued. “And I'm just -- I'm just hoping that it will be about our country and how we treat each other and being the great country that we are.”

Not surprisingly, Lemon then took the discussion in a negative direction.

“I don't know if you remember the controversy during the inauguration when Chrisette Michele sang at the inauguration and just read an article in the New York Times how she basically lost her career for doing so,” he stated.

“You have a much longer history and resume, right? A legend in this business,” Lemon continued. “Is that a concern for you at all given the controversy surrounding this?”

Knight responded: “You know what, nothing good comes easy.”

“For me, it's just for me about respect,” she added before noting:

{T}hey are in the services and that kind of thing, and just to not say that if you really listen to the lyrics of the beginning, you'll understand that. We have fought hard for a long time and not just in wars.

As NewsBusters previously reported, the 74-year-old Atlanta native joined the fray over NFL players kneeling during the playing of the national anthem in mid-January.

At the time, she posted: “Atlanta, I’m coming home!”

“It is unfortunate,” Knight continued, “that our national anthem has been dragged into this debate when the distinctive senses of the national anthem and fighting for justice should each stand alone.”

“I am here today and on Sunday, Feb. 3, to give the anthem back its voice, to stand for that historic choice of words, the way it unites us when we hear it and to free it from the same prejudices and struggles I have fought long and hard for all my life.”

« The Nazification of the Democrats – American GreatnessThe State of the Union: The Real Division Is Not Between Conservatives & Revolutionaries But between Authoritarians & Libertarians »