Before you cry in your beer over the Washington Post’s Super Bowl ad glorifying mainstream media, worried that the free press is under attack in the Trump era, check your facts. Persona non grata Alex Jones may have just broken the bombshell news story of the decade on Saturday when he detailed the rise of a propaganda machine out of the Obama administration. Millions of dollars in funding were approved just before Trump took office, set to attack the new president and silence alternative news. That funding expired just before mass layoffs were announced in the mainstream media.

Jones connected the dots, from the Smith Mundt Modernization Act of 2012, which passed with the 2013 National Defense Authorization Act and ended the ban on using government made propaganda on American citizens, to the 2017 National Defense Authorization Act, which began actively funding propaganda at the outset of the Trump administration. That funding ended in Dec. 2018, Jones points out, which is what may have triggered mass MSM layoffs.

The Smith Mundt Act of 1948 created the global propaganda machine but was amended in 1972 to explicitly ban the use of propaganda and information warfare against the American public.  In Business Insider’s Michael Kelley’s 2012 news story, “NDAA Legalizes the Use of Propaganda on the US Public,” he warned:


“If the NDAA goes into effect in its current form, the State Department and Pentagon can go beyond manipulating mainstream media outlets and directly disseminate campaigns of misinformation to the U.S. public. [emphasis in the original]”

A year later, Foreign Policy’s John Hudson announced, “U.S. Repeals Propaganda Ban, Spreads Government-Made News to Americans.” Signed into law in January for implementation just in time for Independence Day, 2013, the new laws, Hudson reassured, would essentially just allow Americans to know what kind of material the country was putting out that could only be viewed or listened to in other countries through the Broadcasting Board of Governor’s Voice of America, Radio Free Europe/Radio Liberty and the Middle East Broadcasting Networks.

Fast forward to the Fall of 2016 and the Obama administration was in crisis when Hillary Clinton lost the election. The propaganda machine was already in place and the cash infusion was set in motion. On Dec. 1, 2016 Voice of America cheered, “U.S. Senate Panel OKs Funds to Fight Online Propaganda.” The funding — $160 million over two years — would target foreign propaganda and disinformation, like the alleged Russian attempts to get Trump elected, VOA reasoned.

As the rest of the country was otherwise occupied and Obama was about to leave office, on the Friday just before Christmas, the 2017 NDAA was signed into law. “Obama Quietly Signs the ‘Countering Disinformation and Propaganda Act,” Zerohedge reported, sounding the alarm bells:


…while the US media has indoctrinated the public to assume that any information which is not in compliance with the official government narrative, or dares to criticize the establishment, is also ‘fake news’ and thus falls under the ‘Russian propaganda’ umbrella, the scene is now set for the US government to legally crack down on every media outlet that the government deems to be ‘foreign propaganda.’ [emphasis in the original]

In answering questions following his March 15, 2017 testimony before the House Armed Services Committee Hearing on Crafting an Information Warfare and Counter-Propaganda Strategy for the Emerging Security Environment, former member of the Broadcasting Board of Governor’s Matthew Armstrong describes some American news outlets as part of Russian propaganda. He puts it plainly:


“You have [Russia Today], you have Sputnik, you have Ruptly, and then I think you have them feeding other entities, Infowars comes to mind, where those are echo-chambers for those modalities” 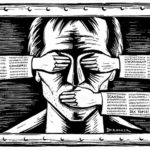 Thus, after green-lighting funds for propaganda to counter foreign agents, American citizens and alternative media outlets were quickly misidentified as foreign agents. Infowars has taken particularly hard knocks of late, the target of multiple lawsuits, demonetization by AdRoll and total de-platforming from YouTube, Facebook, Apple iTunes, and Spotify. CNN celebrated Infowars’ deplatforming calling it a “hate site.” Twitter and Periscope soon joined in this boycott on behalf of the public.

Another year later, Whitney Webb detailed the alarming aftermath of the Smith Mundy Modernization Act in her Center for Research on Globalization February 2018 in depth report “Lifting of U.S. Propaganda Ban Gives New Meaning to Old Song.” She shows a new close relationship between former intelligence officials and mainstream media, making note, in particular, of coordination between the State Department and Vice news. She warns,


In the age of legal, weaponized propaganda directed at the American people, false narratives have become so commonplace in the mainstream and even alternative media that these falsehoods have essentially become normalized, leading to the era of ‘fake news’ and ‘alternative facts.’

Those who create such news, regardless of the damage it causes or the demonstrably false nature of its claims, face little to no accountability, as long as those lies are of service to U.S. interests. Meanwhile, media outlets that provide dissenting perspectives are being silenced at an alarming rate.

In the last weeks of January it was mainstream media who took it pretty hard though. First, Special Counsel Robert Mueller disputed BuzzFeed’s report that Trump directed Cohen to give false testimony. Then there was the unjustified media pile-on against the Covington high school boys based on the media’s rush to judgement and shoddy journalism.

Casual onlookers could be forgiven for thinking that the bad reporting triggered the layoffs, but Alex Jones sees it differently. Jones points out that Obama’s last gift to the press, two years of propaganda funding, ended in December of 2018, and that is what likely triggered mass layoffs. Does that mean all of the newly out-of-work journalists were CIA assets? Of course not. At least not so far as any of them would know.

What we do know is: the propaganda machine has been set in motion, fake news has been legalized and the alternative, independent press has been demonized as foreign mouthpieces, to be crushed under the boot heel of MSM and the Washington Post’s so-called Free Press. Funded or not, what is set in motion will continue unless it is exposed and countered. “Democracy dies in darkness” indeed.

Angela Eckhardt is a freelance writer, wife and mother of eight kids. She has a background in public policy research and journalism. Previously she worked at the Portland-based free market think tank

. Her freedom-themed opinion columns have appeared in newspapers across Oregon. She is author of three reports, including

with recommendations on how to preserve farmland by making small farms more economically viable through regulatory changes. She has a Bachelor's degree in Religious Studies from

« The State of the Union: The Real Division Is Not Between Conservatives & Revolutionaries But between Authoritarians & LibertariansThe Problem with the Media is that Reporters Refuse to Admit Their Own Agendas – Godfather Politics »