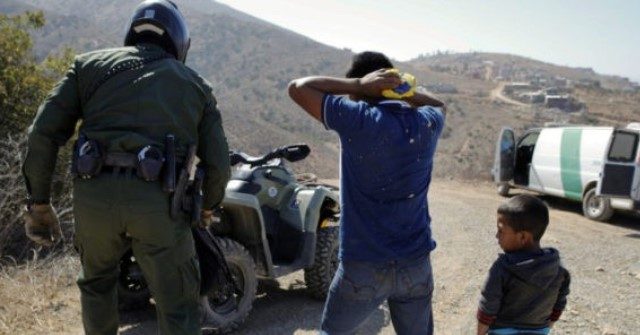 A Guatemalan man allegedly paid a family the equivalent of $130 to “rent” their eight-year-old son so that he could go to the U.S. as a “family,” federal prosecutors told a Tucson grand jury in March. He also allegedly paid another $130 (about 1,000 quetzales) to another person who created a false birth certificate for the child.

In a federal indictment reported on by Tucson.com,  Maynor Velasquez Molina sought out a Guatemalan child he could use to get into the U.S. because he was told that would be “easier to get into the United States with a child,” a federal agent stated in a criminal complaint. Velasquez crossed the border with the young boy as part of a large group of 101 migrants who illegally crossed the border on February 18 just west of the Lukeville Port of Entry, the Arizona news outlet reported.

They made the illegal border crossing after traveling across Mexico by bus, the special agent stated. After being processed in the Tucson Sector, Homeland Security Investigations (HSI) special agents began talking to the man and eventually learned he paid for the use of the boy and for the false documents used in the smuggling case.

The grand jury returned an indictment on March 27 on a charge of human smuggling, Tucson.com stated.

Velasquez is not alone in his efforts to cheat the U.S. immigration and asylum system. Since October 1, 2018, Border Patrol officials in the Yuma Sector reported more than 700 fraudulent family cases, the news outlet reported. Some of those alleged fraudulent cases involve a migrant claiming to be an unaccompanied minor when they are actually an adult. Still others involved misrepresenting the relations between two travelers.

In one case, two Mexican men paid #260 for a pair of birth certificates belonging to a Guatemalan man and a Guatemalan minor with the same last name. The pair were eventually found out and a court sentenced the two men to only 20 days in federal prison, the Tucson news group reported.

Light sentences seem to follow convictions in these cases so far. The Arizona Daily Star reportedly found only 53 prosecutions for false family claims and 15 cases of adults using fraudulent birth certificates to try and pass as a minor since June 2018. Of those, all but three cases resulted in quick pleas for illegally crossing the border where the migrants received sentences ranging from a few days to about six weeks.

“ICE Homeland Security Investigations (HSI) is redirecting resources to the border in response to cases of fake families using forged documents to illegally enter our country and avoid detention. Our highly-skilled teams are working to stop individuals, networks and organizations facilitating child smuggling and document fraud,” ICE Acting Director Matthew Albence said in a written statement. “ICE along with our partners at CBP, remain committed to protecting children by ensuring they are not used as pawns by individuals attempting to gain entry to the U.S. through fraud.”

During 100 interviews conducted in the first two weeks of the operation, agents found possible fraud in 25 percent of the interviews.


Bob Price serves as associate editor and senior political news contributor for the Breitbart Border team. He is an original member of the Breitbart Texas team. Follow him on Twitter @BobPriceBBTX and Facebook.