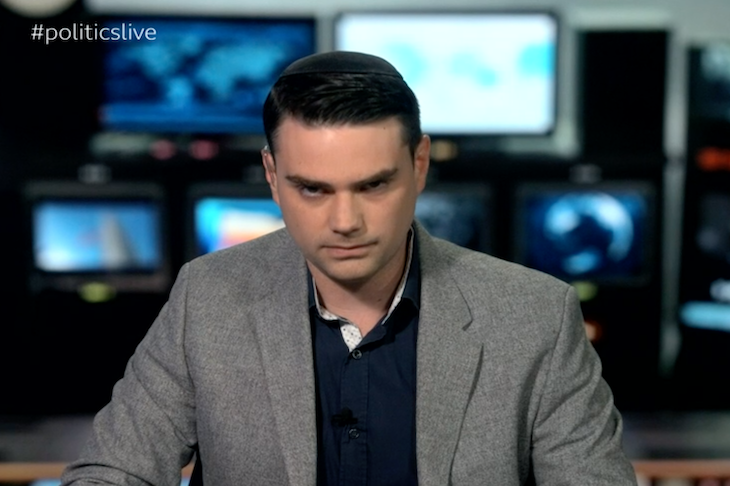 Ben Shapiro is the famous, fast-talking pundit who regularly ‘owns’ aggressive campus students with his quick wit and rapid repartee.

Alas, Shapiro isn’t so ‘crazy smart’ when he comes up against difficult questions from a real interviewer. Yesterday he just couldn’t cope with an interrogation from the BBC’s Andrew Neil. He decided that Neil must be a typical BBC leftist and had an epic tantrum.

Here's @afneil interviewing @benshapiro on #politicslive– this is the full, unedited version. It is not Fox News or an unmediated YouTube video but a tough interrogation. https://t.co/9hn6MtdSJx

Oh dear — should have done your research Ben. The idea that Andrew Neil, who just so happens to also be chairman of The Spectator, is some sort of rabid leftist is hilarious to anybody who has a clue about British media. As Cockburn knows, he is often attacked for being too unacceptably un-left for the BBC. He was just doing what interviewers should do: challenging his guest to justify his views. Facts don’t care about your feelings, after all.

Poor Ben clearly realized he messed up and tweeted an apology last night:

Just pre-taped an interview with BBC’s @afneil. As I’m not familiar with him or his work, I misinterpreted his antagonism as political Leftism (he termed the pro-life position in America “barbaric”) – and that was apparently inaccurate. For that, I apologize.

Cockburn can’t help feeling that the trouble is not just with Shapiro. It is a symptom of America’s stultifying news media. Pundits are so used to having their views echoed back to them in interviews — or only challenged by people who don’t know what they are talking about — that they can’t handle a robust interrogation.

Britain may have its problems, but Cockburn thinks America could learn from our colonial cousins when it comes to debating the news on television.

« COUNTER-COUP COUNTDOWN: Comey Is Worried…And He Should Be“I Hope” House Democrats Break the Rules in Order to Take Down President Trump (VIDEO) »