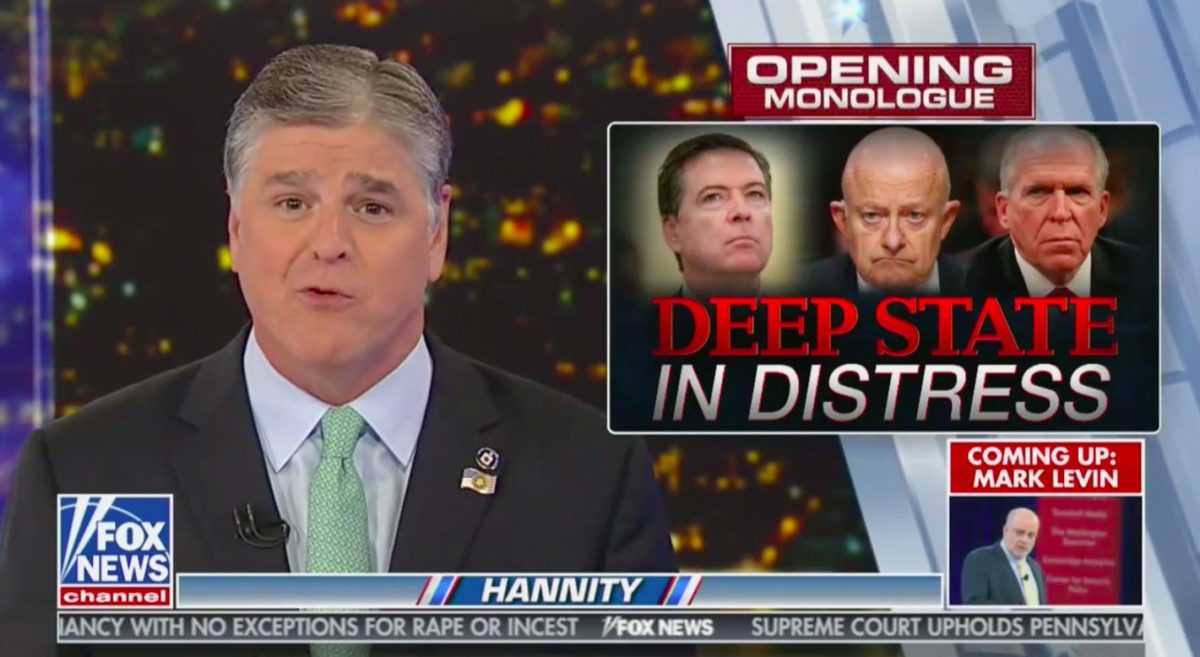 Fox News host Sean Hannity responded to James Comey’s op-ed decrying President Donald Trump in the Washington Post today by mocking the former FBI Director’s “intense love of the spotlight” and suggesting he should heed his “right to remain silent.”

The host brought up the article disputing Donald Trump’s claims that national security and law enforcement officials committed “treason” in carrying out the Russia investigation while discussing the president’s decision to allow Attorney General William Barr to declassify documents related to the special counsel’s probe, as Hannity suggested figures like Comey may now be in the crosshairs.

“The American people, now you will see the truth with their own eyes, and it is not looking good to the few at the top that have abused their power,” Hannity said during his Fox News show tonight. “The question will be who needs to be held accountable? You do not have to take my word for it — the swamp is in full panic mode.”


“Today America’s most holier than thou Jim Comey knows better than anybody, issuing another op-ed, calling Donald Trump a dumb liar… For some reason, super patriot Jim Comey forgot to mention their dirty Hillary Clinton bought and paid for Russian lie dossier even though it was him. He was a guiding light for nearly a year and the very basis for the corruption accusation… And I warned you before, you do have the right to remain silent. You should have taken my advice from the get-go. Sadly, I think that your rage for President Trump and intense love of the spotlight is really overcoming every bit of common sense that you might have.”

He also accused the former FBI director, who was fired by the president early on in his administration, of “desperately now trying to shape the narrative” away from evidence that supposedly incriminates him and other anti-Trump “deep state” figures.

In his op-ed today, Comey wrote that “there was no corruption. There was no treason. There was no attempted coup. Those are lies, and dumb lies at that. There were just good people trying to figure out what was true, under unprecedented circumstances.”

“The conspiracy theory makes no sense. The FBI wasn’t out to get Donald Trump. It also wasn’t out to get Hillary Clinton,” he added. “It was out to do its best to investigate serious matters while walking through a vicious political minefield.”

Watch above, via Fox News.