Blood in the Water: How the US and Israel Conspired to Ambush the USS Liberty

Presents evidence suggesting collusion between US and Israeli intelligence in the attack on a US naval surveillance vessel during the Six-Day War and the more than fifty-year long cover-up.

On June 8, 1967, the USS Liberty, an unarmed intelligence ship reporting to the Joint Chiefs of Staff under the auspices of the National Security Agency, was positioned in international waters off the coast of Egypt when it was attacked with deadly violence by unmarked jet planes firing rockets and machine guns and throwing napalm onto its deck. This ambush was followed by a torpedo strike that blew a forty-foot hole in the starboard side of the ship. Lacking the capacity to defend themselves, thirty-four sailors were killed and 174 wounded, many for life. By the end of the day, Israel had confessed to having been the aggressor, simultaneously arguing that the attack had been an "accident" and a "mistake."
The facts said otherwise. So intense and sustained was the attack - it lasted for nearly an hour and a half - so specific was the aiming for the antennae and satellite dish on deck, that it was scarcely credible that Israel's aggression was not deliberate; such was the view of Marshall Carter, the director of the National Security Agency, his deputy director Louis Tordella, and Richard Helms, the Director of Central Intelligence.
Based on interviews with more than forty survivors, knowledgeable political insiders, and Soviet archives of the period, investigative writer Joan Mellen presents evidence suggesting complicity between US and Israeli intelligence in the attack on Liberty and the more than fifty-year long cover-up. What were the underlying motives? Was this a false flag operation conducted in the midst of the Six-Day War? Was it conceivable that Israel would have initiated such an operation without a green light from the United States?
For the sake of justice, truth and the murdered and surviving sailors, this is a story demanding to be told. 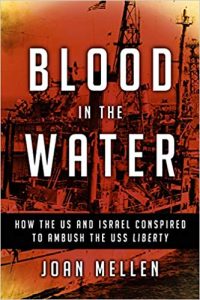 Meghan McCain called President Trump a "child" in the wake of a report suggested the USS John McCain had to be "out of sight" during Trump's recent visit to Japan.

Meghan McCain has opened fire on President Trump, as the ongoing family feud heated up again.

McCain took aim at the president after the Wall Street Journal reported on Wednesday night that an email sent to U.S. Navy and Air Force officials requested that the “USS John McCain needs to be out of sight" ahead of Trump's recent visit to Japan.

"Please confirm #3 will be satisfied," an official reportedly wrote, according to the Journal.

Trump denied knowing the White House ordered the naval vessel named to honor his political nemesis, tweeting that he was "not informed about anything having to do with the Navy Ship USS John S. McCain during my recent visit to Japan."

But before the president had been able to send his tweet, McCain had fired off one of her own.

"Trump is a child who will always be deeply threatened by the greatness of my dads incredible life," the co-host of "The View" tweeted. "There is a lot of criticism of how much I speak about my dad, but nine months since he passed, Trump won't let him RIP. So I have to stand up for him. It makes my grief unbearable."

Fox News contacted the White House for comment on the report.

The Journal reported, citing a photo, that a tarp had covered the ship's name before the president's trip. The paper also reported that after the tarp came down, a barge moved nearby, obscuring the name. However, the U.S. Navy's Seventh Fleet, Cmdr. Clay Doss, said: "The picture of the Tarp is from Friday and it was taken down on Saturday. Paint barge was also removed ahead of the visit. All ships remained in normal configuration during the President's visit."

The president repeatedly has bashed the late-McCain long after his passing in August 2018, continuing to place blame on his "thumbs down" vote that derailed efforts to pass the "skinny repeal" of Obamacare. Trump has also declared he was "was never a fan" of the late-Senator.

Meghan McCain has frequently defender her father on Twitter and on "The View."