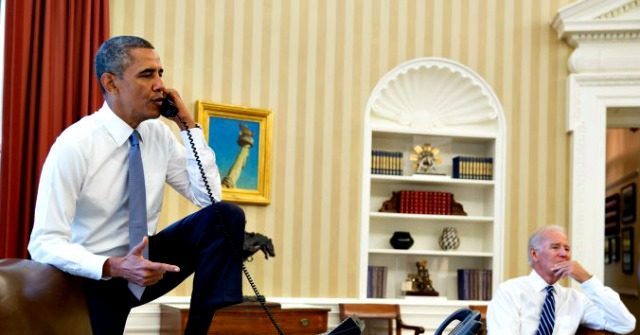 “Joe Biden has a lot to be concerned about” if the origins of the Russia collusion investigation are “proven to be criminal,” said Breitbart News Jerusalem Bureau Chief and senior investigative reporter Aaron Klein on SiriusXM’s Breitbart News Sunday with host Matt Boyle.

Klein also discussed an earlier Washington Post report that is newly relevant: that Biden was reportedly one of the few Obama administration officials who participated in secretive meetings during the early stages of the Obama-era intelligence community’s initial operations regarding suspected Russian interference in the 2016 presidential campaign.

“[Attorney General William Barr] made a statement about how unusual the very — I would say — compartmentalized nature of how the Russia collusion investigation began, [and] how it was just a very small group of people,” said Klein.

Barr recently made comments about possible issues with the intelligence community’s early handling of the Russia investigation, noting it was initially handled at a “very senior level” and then by a “small group.”

In an interview on Fox News, Barr stated:

The thing that’s interesting about this is that this was handled at a very senior level of these departments. It wasn’t handled in the ordinary way that investigations or counterintelligence activities are conducted. It was sort of an ad hoc, small group — and most of these people are no longer with the FBI or the CIA or the other agencies involved. I think there’s a misconception out there that we know a lot about what happened. The fact of the matter is, Bob Mueller did not look at the government’s activities.

Klein added, “So again, we’re talking about a very small group of people involved in the original part of this investigation. And this would have been probably when — we don’t know exactly what they were doing — the unmasking took place of different American citizens from foreign intelligence intercepts.”

The original reported Obama administration meetings about the Russia probe occurred “about the same time that the FBI received … the anti-Trump dossier from Christopher Steele financed by Hillary Clinton and the DNC,” noted Klein.

“Joe Biden’s involved at the very beginning, and so is Secretary of State John Kerry whose State Department received the dossier, by the way, originally,” stated Klein.

The appointment of Robert Mueller framed the basis of the special counsel’s operation as an investigation of what was alleged to be “the Russian government’s efforts to interfere in the 2016 presidential election.”

Klein explained that the “few dozen analysts” assigned to the ostensible investigation were required to “sign additional non-disclosure forms” related to their operations, according to reports.

“Joe Biden is involved at the early stages, which are now being probed by our intelligence apparatus [and] Justice Department,” noted Klein.

Klein speculated, “This goes all the way up to Barack Obama himself, possibly, because Obama was also briefed on some of this. Joe Biden, the leading candidate, is now tied to this. So they need to destroy and really smear the investigators and the investigation, because if it turns against the origin, with Biden possibly being involved, then that has just massive ramifications for everybody.”

Klein concluded, “If the very origins of this investigation are proven to be criminal, then Joe Biden has a lot to be concerned about. … he was in an Oval Office conversation that very strangely was documented by Susan Rice [as having been done] ‘by the book.'”

« Guilfoyle: ‘There May Be Some Growing Pains’ with Mexico Tariffs, But They Work If You’re PatientPolitico Falsely Claims Pastor ‘Apologizes’ for Trump Prayer; Congregants Support Him »