As the Communist party USA kicked off its 100th anniversary celebration, Jarvis Tyner called for delegates and guests at the national convention in Chicago to “set the record straight” about one of American politics biggest historical bogeymen. 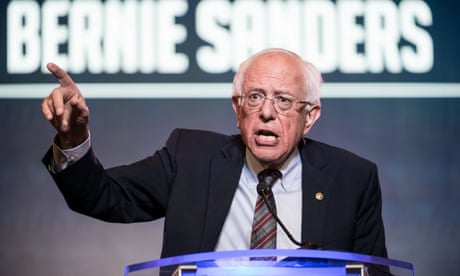 “The truth is the communist party isn’t out to hurt you,” Tyner, vice-chair of CPUSA and its candidate for vice-president in 1972 and 1976, told a large and diverse crowd. “It will set you free.”

The remarks, met with applause, came on the first day of CPUSA’s 31st national convention – and at a moment in American politics in which democratic socialism and progressive ideas are increasingly finding a home in the mainstream of the Democratic party.

Communists from across the US, along with international delegates from Germany, Canada, Venezuela and elsewhere, sought to send the message that their party has been the most consistent champion of those ideas, has been on the right side of some of the most consequential ideological battles of the last hundred years, and is ready to continue the fight into its second century.

“We are a party of action,” said Chicago activist Pepe Lozano in an opening address on Friday. His father, Rudy Lozano, was an aldermanic candidate in the city in the early 1980s who rallied Mexican and Puerto Rican voters to support Harold Washington, the first African-American mayor. The elder Lozano was shot dead in 1983 in what supporters say was an assassination.

“We are united,” Lozano said. “We are determined. We are raring to fight.”

Communism has long been regarded with fear in the US, viewed as antithetical to American values and democracy. The US spent much of the 20th century in battle against it, seeking to contain it in Korea, Vietnam and elsewhere, hot wars fought as part of the cold war with the Soviet Union.

Decades were spent attempting to root out communism at home, including during the first red scare following the first world war and the second red scare of the 1940s and 1950s, in which Senator Joseph McCarthy led “investigations” to out suspected communists in government and public life. Accusations of communism, as well as socialism, continue to be leveled by conservatives against mainstream liberal politicians, including Barack Obama.

But there is also a long history of communism and radical leftwing politics in America, as leaders and attendees pointed out in Chicago.

“The story of our communist party is inextricably intertwined with the development of the American working class and building its labor movement,” Lozano said. “Our roots are in the profound American struggles for democracy.”

Lozano cited party support for the civil rights and anti-war movements, for battles against police abuse and mass incarceration, and for drastic action to combat climate change including the Green New Deal proposed by Alexandria Ocasio-Cortez, one of the faces of the young democratic socialist movement within the Democratic party.

Nobody is better at beating red-baiting than the reds

To attend the CPUSA convention is in some ways to encounter familiar concerns and ideas. Attendees were animated by issues that 2020 presidential hopefuls have pushed to make part of the Democratic platform, including plans to address climate change, inequality and hawkish foreign policy – as well as opposition to Donald Trump, who has sought to “divide working people”, attendees said.

“Our job as communists is to unite people,” Ismael Parra, from Los Angeles, told the Guardian.

“We’re talking about people being joined together,” said Tere Gonzalez, also from LA.

Mainstream liberals would have found other elements of the convention less familiar. In a student center on the campus of University of Illinois Chicago, in a large hall past a Dunkin Donuts and a PNC bank, attendees invariably greeted one another as “comrade”. A few wore apparel bearing a hammer and sickle.

The convention began with the entire crowd enthusiastically singing This Land Is Your Land, Woody Guthrie’s classic folk song. And while even some of the most progressive mainstream politicians, Elizabeth Warren among them, have bristled at the “socialist” label, it can be striking to hear Americans openly discuss their support for communism.

“Nobody is better at beating red-baiting than the reds,” Tyner joked, suggesting the Communist party could best defeat Republicans in 2020.


‘Our victory is inevitable’

While Tyner suggested during his speech that the party has differences with Ocasio-Cortez and others of the new wave of democratic socialists, that surge of progressive energy appeared to have emboldened the party and attracted new interest. 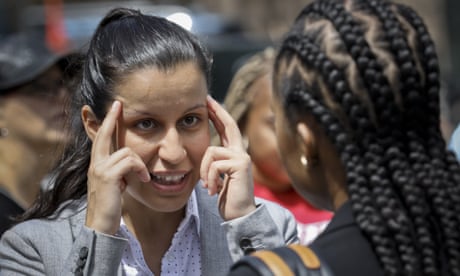 People’s World, the news outlet affiliated with CPUSA, has seen increased readership this year, editor-in-chief John Wojcik and managing editor CJ Atkins told the convention. Several guests were not members of the party, but at the convention to learn more about it.

Timothy Faye, who is not a communist but is interested in leftist causes, came to Chicago from Rhode Island. While many older Americans may have a negative view of communism, he said, younger people like him may be more open to its message.

“There’s a leftward shift among young people,” Faye told the Guardian. “It’s a reflection of the economic environment people are in.”

The party seems to see an opportunity to build.

“Together, we will win,” Lozano said, concluding his speech. “Our victory is inevitable. Viva the Communist party USA!”

… we have a small favour to ask. More people are reading and supporting The Guardian’s independent, investigative journalism than ever before. And unlike many new organisations, we have chosen an approach that allows us to keep our journalism accessible to all, regardless of where they live or what they can afford. But we need your ongoing support to keep working as we do.

The Guardian will engage with the most critical issues of our time – from the escalating climate catastrophe to widespread inequality to the influence of big tech on our lives. At a time when factual information is a necessity, we believe that each of us, around the world, deserves access to accurate reporting with integrity at its heart.

Our editorial independence means we set our own agenda and voice our own opinions. Guardian journalism is free from commercial and political bias and not influenced by billionaire owners or shareholders. This means we can give a voice to those less heard, explore where others turn away, and rigorously challenge those in power.

We need your support to keep delivering quality journalism, to maintain our openness and to protect our precious independence. Every reader contribution, big or small, is so valuable. Support The Guardian from as little as $1 – and it only takes a minute. Thank you.

« Sanders to propose canceling entire $1.6 trillion in US student loan debtEvangelicals go all in for Trump reelection »