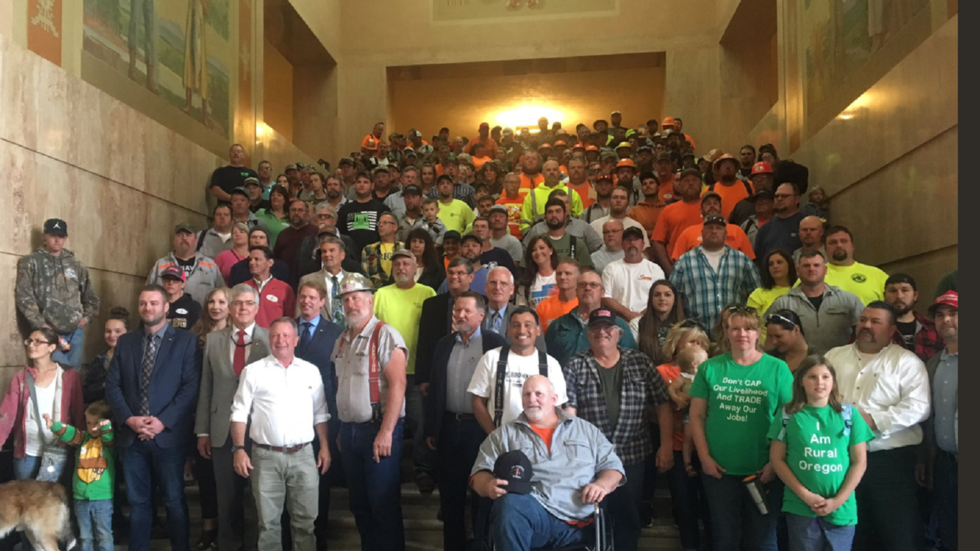 Oregon GOP official twitter account has been mocking Democrats as Republican senators have been escaping a legislative session in order to sabotage a climate bill. Police were ordered to bring in rebel lawmakers amid protests.


The bizarre political drama in the Beaver state centers around House Bill 2020 that will reduce fossil fuel emissions by 2050. Democrats hold a 18-12 majority in the state Senate, but they need 20 people for a quorum to pass the legislation. And eleven republicans went into hiding on Thursday thus disrupting every session since then.

Also on rt.com ‘Come heavily armed’: Showdown in Oregon as governor sends police to round up Republican lawmakers

While the state police are searching for senators at the request of the governor, the official GOP twitter has been provoking a heated online row.

The tweet came out after Oregon State Senate closed Saturday citing a “possible militia threat.” Several local militia groups including the Oregon Three Percenters who were involved in an armed takeover of a wildlife refuge in 2016 pledged their support to local lawmakers.

It’s unclear if it was intentionally or not, but the photo accompanying the tweet was from Wednesday’s protest after the House passed the bill. Truckers, loggers and other opponents of the legislation insist it would devastate communities and cost jobs for the sake of ‘reckless’ environmental policies.

Please everyone be careful how you report that @Oregon-GOP tweet.

It's totally messed up.

I did an image search.

The picture isn't of a militia storming the capital over the weekend.

It's a of a normal protest from a few days ago largely composed of truckers/loggers. pic.twitter.com/PWQxK3ILCC

The messaged has been bashed for inciting hatred and misrepresenting the protesters.

Sad this comes from the official Oregon GOP account. But I guess we are past a time when ppl hide who they actually are. At some point some journalist will say “ both sides are to blame.” But one side shows up with guns. https://t.co/K4VnwLFsfN

You are cheering violent threats against lawmakers and using phony photos of a timber industry protest. Way to go guys. Bringing glory to the GOP. pic.twitter.com/9qAkljakwD

The ubiquitous congresswoman Alexandria Ocasio-Cortez ((D-NY)joked that this is the way Republicans deal with “Sunday Scaries” and pledged to find them a  “therapist.”

#1: These are people protesting peacefully - hence their POSTERS & not FIREARMS

#2: Why do you call some who threaten violent attack a “militia” vs others “domestic terrorists?”🤔

#3: This a very dramatic way to deal with your Sunday Scaries.

We can help you find a therapist. https://t.co/bTf1VGC7QJ

The Oregon GOP doubled down later with a tweet showing children at the steps of the capitol and saying there were “more scary miltia people” (sic) and “no wonder Senate Democrats left.”

Protests against the legislation that would limit carbon emissions in the state and allow companies to exchange emission “allowances” continued on Sunday as rural communities are concerned that it would drive fuel prices up and hurt small businesses, farmers and loggers. The next legislative session is on Monday, but there's no indication that Republican lawmakers would show up.

No sign of “militia” groups outside the capitol this morning. Families and individuals have turned out to voice their opposition to the cap and trade bill. Senate Republicans continued their walkout and the legislative session was adjourned minutes after it began. @KGWNewspic.twitter.com/H9nyqJusdb

Tensions between the coastal and inland communities are not new in Oregon. Back in 2016, land rights activists occupied the Malheur National Wildlife Refuge in protest at the federal government’s mistreatment of landowners. Nevada ranchers Ammon and Ryan Bundy led the group that took over the refuge, kicking off a 40-day standoff with Oregon and federal police.