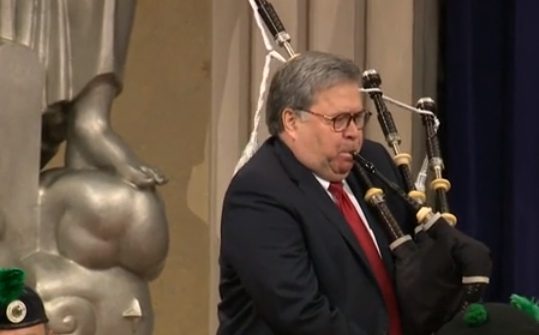 Attorney General William Barr took to the bagpipes at the Justice Department Wednesday to entertain the assembled guests with his ability to master the Scottish instrument.

Barr, who is a longtime piper, played ‘Scotland the Brave’ alongside the pipes and drums of the NYPD Emerald Society band, which performed just before the attorney general gave his opening remarks in Washington, DC.

The traditional highland display took place at the U.S. Attorneys’ National Conference at the Justice Department’s headquarters, Barr revealing the last time he played the instrument was in December at his youngest daughter’s wedding,

“(My staff was) going to surprise me by having the Emerald Society pipe band come down from New York, but as you know I’m very proficient at — dare I say the word — spying,” Barr joked. He went on to say he then countered the “plot” by planning to play the bagpipes himself.

Watch the video and judge for yourself whether or not he succeeded.

« Trump: Legislation May Be Necessary to Create Competition on Social MediaMilitary’s mission doesn’t include enforcement, so smugglers cross Rio Grande right in front of them »