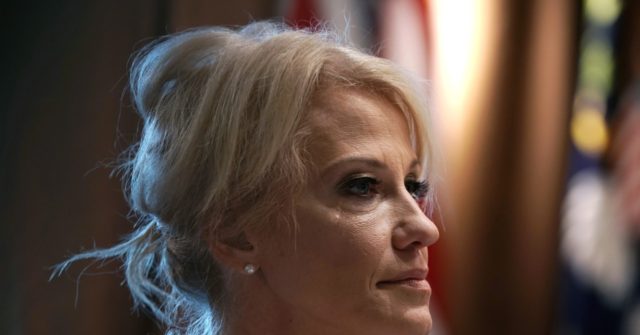 The House Oversight Committee voted Wednesday to subpoena Kellyanne Conway after she failed to show up to the panel hearing on her alleged Hatch Act violations.


As you know, the precedent for members of the White House staff to decline invitations to testify before congressional committees has been consistently adhered to by administrations of both political parties, and is based on clearly established constitutional doctrines.

“The Office of Special Counsel found that Ms. Conway violated the Hatch Act dozens of times,” House Oversight Chairman Elijah Cummings (D-MD) said. “Let me repeat that – dozens of times – and has recommended that the president fire her, but he refuses to do so.”

“In fact, he refuses to take any disciplinary action against her,” he added.

Cummings cited “two million” federal employees who adhere to the Hatch Act every day, adding, “Nobody is above the law.”

“We wanted to hear from her directly. She’s a public official – who we pay by the way – who has been accused of wrongdoing. And she refused to explain herself to the Office of Special Counsel,” he said.

“The American people demand that our public officials follow the law and be held accountable for their actions,” Cummings continued.

The resolution “demands answers and requires Ms. Conway to provide those answers under oath,” he added.

“Here’s what is troubling Mr. Chairman. As we start to look at this subpoena, we have one standard for Kellyanne Conway and another standard for everybody else,” Meadows said.


If you’re going to subpoena people, let’s subpoena Samantha Powers. Let’s make sure she comes in because you want to know what I have? I’ve got emails on her official account where she was going after Donald Trump while she was working on our government and, indeed, at the same time was unmasking individuals. So if we want to hold people accountable, let’s do it with the same standard. I don’t think it’s right to hold her to a different standard.

Despite the pleas from Rep. Jim Jordan (R- OH) and Meadows, the committee passed the subpoena resolution, 25-16.

« MAJOR FIND: More Ammunition for Roger Stone: The Only Firm to Review DNC Server, Crowdstrike, is Connected to James Clapper, The Atlantic Council and More Shoddy IT Investigative WorkTrump: Legislation May Be Necessary to Create Competition on Social Media »