Over Alito’s Fuming Dissent, Gorsuch and the Liberals Protect the Right to Trial by Jury 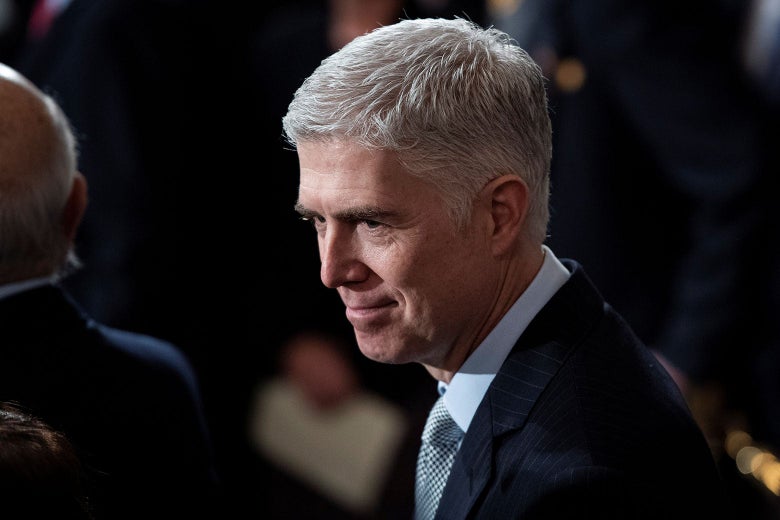 The constitutional right to trial by jury won a significant victory at the Supreme Court on Wednesday that once again brought Justice Neil Gorsuch together with the court’s liberal wing. Gorsuch’s plurality decision in United States v. Haymond places new, important limits on the government’s ability to extend the sentences of certain offenders without a jury’s input. It may be the first tremor in a coming Sixth Amendment earthquake. The remaining conservative justices seem to think so: Justice Samuel Alito’s apoplectic dissent warned that Gorsuch is preparing to demolish the federal scheme that Congress cooked up to let judges imprison offenders for longer than any jury ever permitted.

Alito is probably exaggerating—but even if he’s right, it’s about time SCOTUS scrutinized the “supervised release” system at issue in Haymond. Congress created this system after it abolished parole for federal defendants in 1984. Here’s how it works: Upon conviction, offenders are sentenced to a term of imprisonment and, after that, a period of supervised release. During this stretch of conditional freedom, offenders must abide by certain terms like drug testing. If they violate the terms, they can be sent back to prison for the remainder of their supervised release.

The law in Haymond altered this arrangement with grave constitutional consequences. It first states that offenders convicted of certain sex offenses who violate their supervised release must be imprisoned. So far, so good. But instead of sending these individuals back to prison for their original conviction, the statute compels judges to impose additional prison time for the new offense. Judges may find these individuals guilty of a new offense under a “preponderance of the evidence” standard, not the “beyond a reasonable doubt” standard typically required by due process. And judges make this finding without a jury’s involvement.

Andre Haymond’s case illustrates this scheme in action. At age 18, Haymond was convicted of possessing several images of child pornography. A judge sentenced him to a 38-month prison term, followed by 10 years of supervised release. After Haymond was released from prison, government agents accused him of possessing additional child pornography. He contested their claim in a proceeding that poked many holes in the government’s case. The judge announced that “[i]f this were a criminal trial and the Court were the jury, the United States would have lost.” But under the lenient standard prescribed by the law, the judge found it “more likely than not” that Haymond had downloaded the images. Under the law at issue, this finding required the judge to sentence Haymond to more time in prison—five years to life.

This entire process is wildly out of whack with the usual constitutional safeguards. Under the Sixth Amendment, the government must prove to a jury every element of a crime that raises the minimum or maximum sentence. And under the Fifth Amendment, it must do so beyond a reasonable doubt. Yet the law in Haymond allowed a judge, not a jury, to find a defendant guilty—and to do so by a preponderance of the evidence. Moreover, it obligated the judge to impose a mandatory minimum upon this finding of guilt, increasing the offender’s prison sentence.

How might any of this be legal? In his plurality opinion—joined by Justices Ruth Bader Ginsburg, Sonia Sotomayor, and Elena Kagan—Gorsuch explained that it obviously isn’t. “Only a jury, acting on proof beyond a reasonable doubt, may take a person’s liberty,” he began. “That promise stands as one of the Constitution’s most vital protections against arbitrary government.” In our system, juries “exercise supervisory authority over the judicial function by limiting the judge’s power to punish.” A judge’s “authority to issue a sentence derives from, and is limited by, the jury’s factual findings of criminal conduct.” By forcing judges to exceed that authority, Congress ran afoul of the Constitution.

Justice Stephen Breyer concurred in the judgment only. His own brief opinion noted that the law in question was “less like ordinary revocation” of supervised release and “more like punishment for a new offense, to which the jury right would typically attach.” Breyer seemed eager to clarify that most supervised release proceedings are consistent with the Fifth and Sixth amendments, but this one strayed too far afield from “the original crime of conviction.”

In an incandescent dissent, Alito wrote that there is “no constitutional basis” for Breyer’s view—but that his narrow concurrence “saved our jurisprudence from the consequences of the plurality opinion, which is not based on the original meaning of the Sixth Amendment, is irreconcilable with precedent, and sports rhetoric with potentially revolutionary implications.” Indeed, Alito wrote, Gorsuch’s plurality opinion “appears to have been carefully crafted for the purpose of laying the groundwork for later decisions of much broader scope.”

This entire process is wildly out of whack with the usual constitutional safeguards.

That’s quite a charge! But Alito backs it up: “Many passages in the opinion,” he wrote, “suggest that the entire system of supervised release … is fundamentally flawed in ways that cannot be fixed.” These passages “strongly suggest that the Sixth Amendment right to a jury trial applies to any supervised-release revocation proceeding.” And that, in turn, “means that as a practical matter supervised-release revocation proceedings cannot be held.” Alito further pointed out that federal courts held 1,809 jury trials in 2018. That same year, by contrast, “they adjudicated 16,946 revocations of supervised release, and there is simply no way that the federal courts could empanel enough juries to adjudicate all those proceedings.” Thus, applying the Sixth Amendment here would cause the “whole concept of supervised release” to “come crashing down.”

Alito would avoid this problem with a cramped reading of constitutional liberties. The Sixth Amendment states that “the accused” enjoy the right to a jury trial in “all criminal prosecutions.” According to Alito, an offender on supervised release is not “the accused” because he has already been convicted. A hearing to revoke his supervised release is “not primarily a punishment for new criminal conduct,” so it is not a “criminal proceeding,” either. As a result, the Sixth Amendment doesn’t apply to supervised release hearings, even when they can trigger a longer sentence for alleged offenses not proved to a jury.

Gorsuch rejected Alito’s effort to wall off these hearings from the Constitution by devising a new name for them. He also dismissed Alito’s “apocalyptic prophecy,” providing various reasons why only a “small set of cases” will trigger Sixth Amendment concerns, since most offenders who violate supervised release won’t be sent to prison for longer than a jury authorized.

In truth, it’s hard to tell just how big a splash Wednesday’s decision in Haymond will make. Breyer’s concurrence attempted to limit its impact … while largely endorsing key aspects of Gorsuch’s logic. It’s not even clear what happens to Haymond himself now: Gorsuch asked the appeals court to decide whether he can receive a jury trial for the new alleged offense, or if the law must be invalidated. This court is sure to continue squabbling over this issue for years to come.

Still, on Wednesday, it took the first step in the right direction—thanks to Gorsuch. The justice may not be a reliable friend to criminal defendants, but his libertarian streak has yielded multiple decisions that favor the rights of the accused. His head-to-head with Alito in Haymond is a fascinating case study in an intra-conservative squabble; as Alito contemptuously put it, Gorsuch’s opinion “represents one particular view about crime and punishment that is ascendant in some quarters today.” We can only hope it continues to ascend at the Supreme Court.

Help us continue covering the news and issues important to you—and get ad-free podcasts and bonus segments, members-only content, and other great benefits.