Eddie Gallagher Speaks Out on Fox & Friends After Acquittal 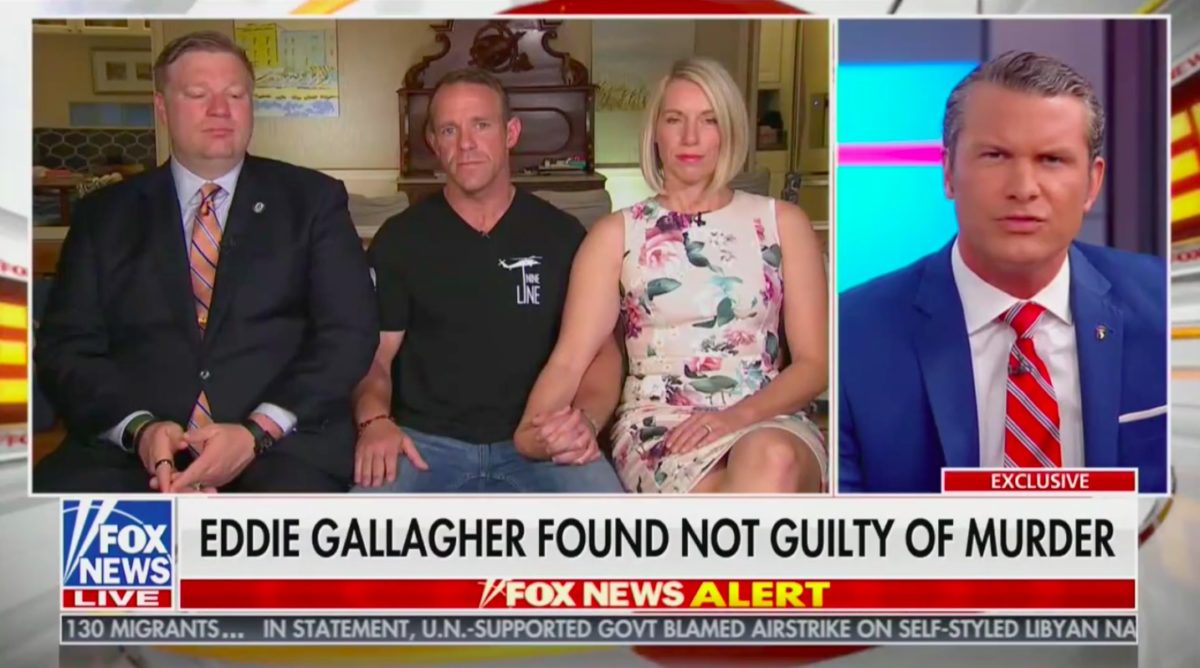 Navy SEAL Special Operations Chief Edward Gallagher appeared on Fox & Friends Wednesday morning for his first television interview since he was found not guilty of murder in the killing of a teenaged ISIS fighter held in captivity.

In the interview, the decorated SEAL accused a “small group” of fellow SEALs of deciding to “concoct” the allegation that he stabbed the wounded prisoner in the neck with a hunting knife in Iraq in 2017.

“I want to make clear that this small group of SEALs that decided to concoct this story in no way, shape or form represent the community that I’ve loved and gave my soul to,” Gallagher said. “So this has put a black eye on this community but I want the nation to know that this is not what our community is about.”

Gallagher was turned in by his own platoon last year, when fellow SEALs accused him of firing on civilians and stabbing the fighter to death, amongst other war crimes. The chief was also charged with threatening to kill SEALs who reported him.

Gallagher was acquitted on Tuesday by a jury of five Marines and two sailors, according to NBC News. During the two week trial, seven SEALs testified that Gallagher stabbed the young prisoner after the boy received medical treatment.

Navy Cmdr. Jeff Pietrzyk testified that text messages sent by Gallagher after the killing proved his guilt, according to NBC News. “I’ve got a cool story for you when I get back. I’ve got my knife skills on,” one text read. Another: “Good story behind this. Got him with my hunting knife.”

The trial was upended when Special Operator Corey Scott — who told the jury he saw Gallagher stab the victim — said he was the one who actually killed the boy, by cutting off his breathing tube with his thumb when he knew the boy was going to die. Scott was granted immunity to testify.

At the end of their interview, Fox & Friends Weekend host Pete Hegseth, who lobbied President Donald Trump privately to pardon Gallagher, asked the SEAL chief about a pet issue: whether the current rules of engagement are too strict on those fighting overseas.

“Are we empowering [SEALs] the way we need to to go defeat our enemies?” Hegseth asked.

Gallagher paused and looked at his lawyer. “I’m not going to speak on rules of engagement, or anything like that overseas. I’m going to leave that to the people that are fighting the fight over there.”

“I would say to future Navy SEALs: Loyalty is a trait that seems to be lost. And I would say bring that back.”

Watch above, via Fox News.