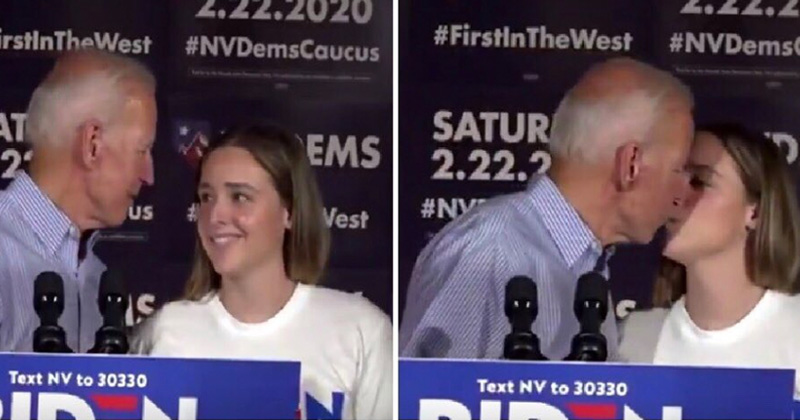 People are questioning whether it was the right move for Creepy Uncle Joe Biden to smooch one of his young relatives right on the lips.

At a recent 2020 campaign stop in Nevada, the 76-year-old Biden laid one smack dab on the lips of his 19-year-old granddaughter, Finnegan Biden, who appeared to reciprocate the gesture.

The kiss might have been ignored had it not been for Biden’s questionable history of unwanted advances seen on video and reported by several females.

Earlier this year, a Nevada Democrat came forward with accusations Joe Biden awkwardly smelled her hair, kissed her head and made her feel uncomfortable during a 2014 campaign event.

“As I was taking deep breaths and preparing myself to make my case to the crowd, I felt two hands on my shoulders. I froze. “Why is the vice-president of the United States touching me?” wrote Lucy Flores in a New Yorker op-ed published in March.

“I felt him get closer to me from behind. He leaned further in and inhaled my hair. I was mortified. I thought to myself, ‘I didn’t wash my hair today and the vice-president of the United States is smelling it. And also, what in the actual fuck? Why is the vice-president of the United States smelling my hair?’ He proceeded to plant a big slow kiss on the back of my head. My brain couldn’t process what was happening. I was embarrassed. I was shocked. I was confused. There is a Spanish saying, ‘tragame tierra,’ it means, ‘earth, swallow me whole.'”

Biden’s touchy-feely antics around young females during congressional ceremonial swear-ins has also been a widely-exposed subject of internet researchers and mainstream media alike, with the Washington Post in 2015 asking, “What are we going to do about Creepy Uncle Joe Biden?”

What do you think? Was the kiss more evidence of Biden’s creepy behavior, or a harmless peck? Sound off below.

via Alex Jones' Infowars: There's a war on for your mind! https://ift.tt/2GqA2ld