Tlaib: Take Money from Rich and Give It 'Back to the People that Earned It' 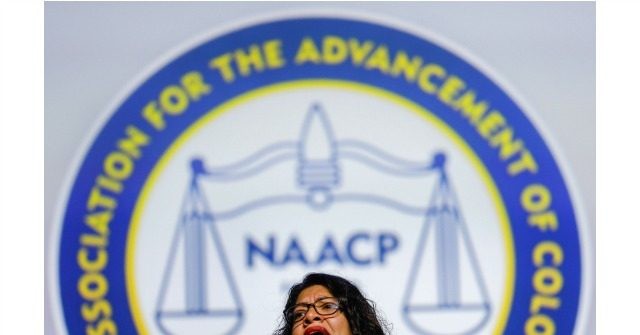 Far-left “Squad” member Rep. Rashida Tlaib (D-MI) spoke at the NAACP convention over the weekend and railed against the GOP tax cuts in a pitch for her anti-poverty BOOST Act, promising to take money from the rich and give it “back to the people that earned it.”

Tlaib introduced her anti-poverty legislation – the Building Our Opportunities to Survive and Thrive (BOOST) Act – last month and spoke about it at the NAACP convention over the weekend. The proposal offers a guaranteed income – up to $6,000 per year – to families and individuals under certain financial thresholds via a “refundable tax credit that can be paid monthly.”

The Michigan lawmaker’s BOOST Act serves as her response to what she calls the “GOP Tax Scam,” despite the fact that two-thirds of Americans will pay less in taxes in 2018, thanks to the tax cuts.

“Recently, I introduced the Boost Act. This legislation completely repeals the GOP Tax Scam that is only helping wealthy individuals – the rich, the corporations,” she told the crowd.

“And do you know what I did with that money? Do you know what I said? We’re going to go ahead and put it in the pockets of folks like everyday Americans,” she said, noting that families making less than $100,000 could get up to $6,000 per year.

Taking the moral route, Tlaib said it is important to give money back to the people who actually “earned” it, suggesting that wealthy individuals do not earn or deserve to keep the fruits of their labor.

“That’s what we do with our public dollars. We give it back to the people– the people that earned it,” Tlaib said.

.@RashidaTlaib at the #NAACPConvention on her "Boost Act": I'm going to take money from the rich and "give it back to the people, those who earned it." pic.twitter.com/P0e94sTu0O

The BOOST Act, Tlaib added, serves as a “signal that we’ve gone too far in providing for corporations and the rich and those on top and have not taken care of our everyday folks,” who, she says, are $400 away from falling into the cycle of poverty.

The economy has seen a boost from the GOP tax cuts, with companies issuing employee bonuses and announcing plans to invest billions in the U.S., thereby providing thousands of new jobs.

Last year, Exxon Mobil announced that it would invest $50 billion in the U.S. economy, adding 12,000 new jobs, thanks to the GOP tax cuts.

Even Starbucks, a notoriously left-leaning company, used millions of its corporate tax cut to raise the wage for existing workers.

The coffee chain joins some 200 American corporations that are already raising wages thanks to a corporate tax cut signed into law by President Trump last month. Starbucks, a mega-corporation with a far-left worldview, has now joined a handful of other far-left corporations — Apple and Disney — in validating the idea that tax cuts benefit everyone, or what is known as trickle-down economics.

House Speaker Nancy Pelosi (D-CA) infamously dismissed the benefits of the GOP tax plan, calling bonuses and raises “crumbs” for the American worker. Trump responded to her remark during a speech before the Sheffer Corp. in Blue Ash, Ohio, last year, noting that her statement had the potential to be the political equivalent of Hillary Clinton’s “deplorables” and come back to haunt her.

“Well, she’s a rich woman who lives in a big, beautiful house in California, who wants to give all of your money away. And she talked about ‘crumbs,'” Trump said.

“And I really think her statement about ‘crumbs’ — ’cause you’re getting thousands and thousand of dollars, and you’re getting it every year  … will be equivalent — and I said this the other day for the first time — when I first heard the word, ‘deplorable,’” he added.