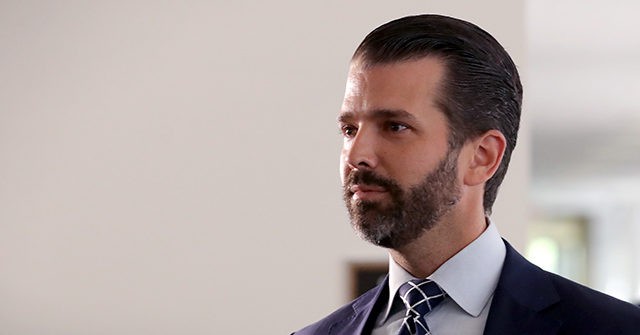 Speaking with Breitbart News at the Turning Point USA Teen Student Action Summit in Washington, DC, Trump mocked Mueller for saying he wasn’t aware of Fusion GPS, which “started the whole thing,” despite spending tens of millions of dollars on the years-long investigation.

“Today, I’m watching the Mueller testimony, and he’s saying he’s never heard of Fusion GPS,” he said. “I mean, think about that, you spend $50 million dollars in two years on an investigation, and you don’t even know what started the whole thing?”

“I mean, does anyone really believe that?” Trump added. “Do these people have any credibility left?”

The president’s eldest son, who is also the family’s most outspoken political operative, predicted that President Trump will greatly expand his electoral map in the upcoming 2020 election.

“When you look at what’s been going on for the last few years, it’s hard to believe that not all of them will [be battleground states],” he said. “It’s a disgrace what’s happening on the other side.”

“On paper, all of them should be up for grabs,” Trump added. “I realize that’s not going to happen, but it should. If facts mattered, 2020 would be over right now, but because of mainstream media bias, because of Hollywood and pop culture biases, it’s always going to be a tough fight, and we’re going to be out there fighting hard every day.”

« [VIDEO] Ilhan Omar: Americans ‘Should be More Fearful of White Men’ Than of Islamist TerroristsCapital punishment to be resumed by federal government »