Gaetz: Mueller Was Going to Breath Life into the Mueller Report -- Instead He Sucked Life Out of Impeachment | Breitbart 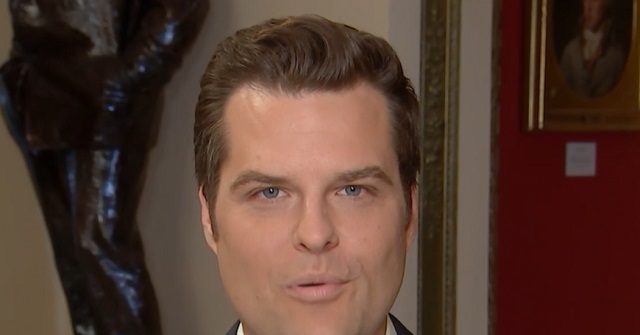 During an appearance on MSNBC on Thursday, Rep. Matt Gaetz (R-FL) was asked to react to the fallout from former special counsel Robert Mueller’s testimony before the House Intelligence and Judiciary Committees.

Gaetz noted the build-up that originated from his Democratic House colleagues, including House Intelligence Committee chairman Rep. Adam Schiff (D-CA) but argued the hearing had the opposite effect.

“Disagreeing with Robert Mueller isn’t an impeachable offense,” Gaetz said. “Let’s remember where the goalposts were. At the beginning of the week, Adam Schiff said that Robert Mueller would be breathing life into the Mueller report. Instead, what you saw yesterday was Robert Mueller sucking life out of the impeachment movement altogether. Republicans are very happy with how it went. There was no new information.”

“And when you heard Speaker Pelosi say earlier in your broadcast we have to wait to build a strong case, it seems to presuppose right now the case isn’t strong,” he continued. “The fact they have to continue their investigative activities seems to suggest Democrats do not believe there is sufficient evidence in the Mueller report or from Mueller’s testimony yesterday to impeach the president. And by the way, six out of 10 Americans agree with them. Nothing you saw yesterday is going to change the underlying political dynamic, which is the country wants the House Democratic majority to move on.”