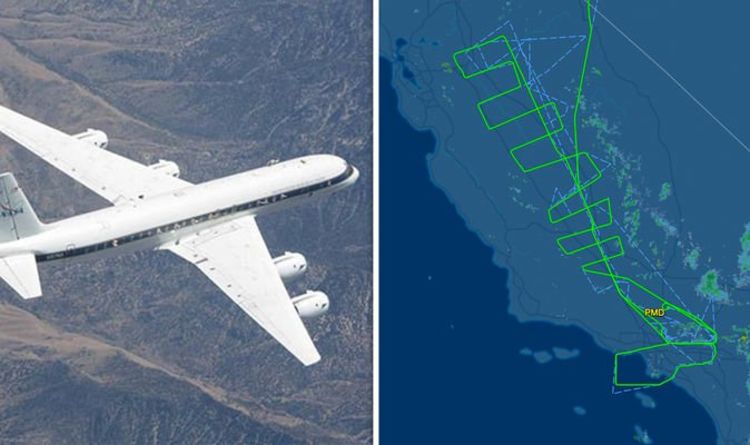 California could be heading for an imminent Big One earthquake, according to the latest conspiracy theories surrounding a mysterious NASA aircraft. A high-tech NASA-owned airplane has been flying bizarrely low to the ground, sparking alarm among residents in California. However, the mystery deepened after the plane’s flight path was discovered.

According to the flight tracker path, the NASA817 plane has been “scanning and zig-zagging” over the infamous San Andreas Fault.

This has intensified fears that California could soon be struck by the long-awaited Big One mega-quake.

The sighting of the NASA aircraft has prompted speculation and conspiracy theories that the US space organisation knows something about an imminent quake.

JUST IN: California earthquakes: Golden State rocked by more than 100 tremors in 24 hours

She said: "You didn’t know if was going to land. Everyone kind of stopped in their cars, looking up."

The large plane, which is painted white with a blue stripe and the NASA logo on the tail, was spotted flying at the height of afternoon rush hour in the San Gabriel Valley.

He said: “A registered NASA aircraft was noticed doing zig-zag flying patterns near and over the San Andreas fault line.

“It’s almost as if it is scanning the ground as if to try and get more data about what is happening underneath.

“What is going on? Is something occurring? What do they know, are they gearing up for something? Do they know the Big One is coming?”

The San Andreas Fault – which forms the tectonic boundary between the Pacific Plate and North American Plate – runs across the length of California.

Fears about an impending mega-earthquake in California has raged for years, with claims that such an incident would cause a huge tsunami to submerge large swathes of the west coast.

Dr. Lucy Jones from the US Geological Society recently claimed the Big One was on its way.

NASA has not responded to calls  to find out why the plane was flying so low.