About a quarter of large U.S. newspapers laid off staff in 2018

Layoffs continue to pummel U.S. newspapers. Roughly a quarter of papers with an average Sunday circulation of 50,000 or more experienced layoffs in 2018, according to a new Pew Research Center analysis. 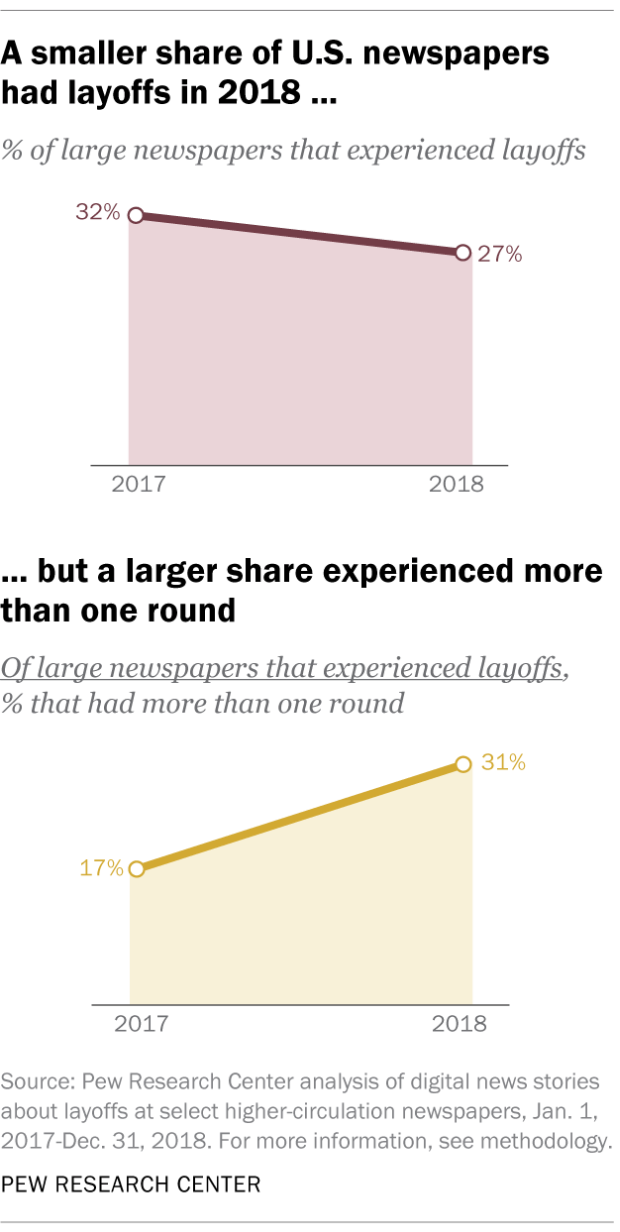 The layoffs come on top of the roughly one-third of papers in the same circulation range that experienced layoffs in 2017. What’s more, the number of jobs typically cut by newspapers in 2018 tended to be higher than in the year before.

The following analysis examines layoffs at large newspapers and digital-native news outlets during the full 2017 and 2018 calendar years. An earlier analysis by the Center looked at layoffs at news organizations covering the period from January 2017 to April 2018.

About one-in-four U.S. newspapers with an average Sunday circulation of 50,000 or higher (27%) experienced one or more publicly reported layoffs in 2018, according to the study, which examined news articles that cited staff layoffs at these outlets. This is slightly lower than the 32% of newspapers in this circulation range in 2017.

The specific papers with 50,000 or more Sunday circulation can vary year to year, but the vast majority (85%) fell into this category in both years included in this analysis. Of these, 9% had layoffs in 2017 and 2018. In other words, the papers that experienced staff losses in 2018 were for the most part different from those that did in 2017, widening the span of outlets with depleted staff.

While news reports did not always provide the exact number of newsroom staff being laid off, some broad conclusions can be drawn from the data. Among the newspapers for which the Center could determine the number of laid-off staff, 62% laid off more than 10 people in 2018, more than the 42% that did the same in 2017. This suggests a year-over-year increase in the number of jobs typically cut by newspapers during layoffs.

These findings come amid warnings that the news business is on pace for its worst job losses in a decade in 2019. 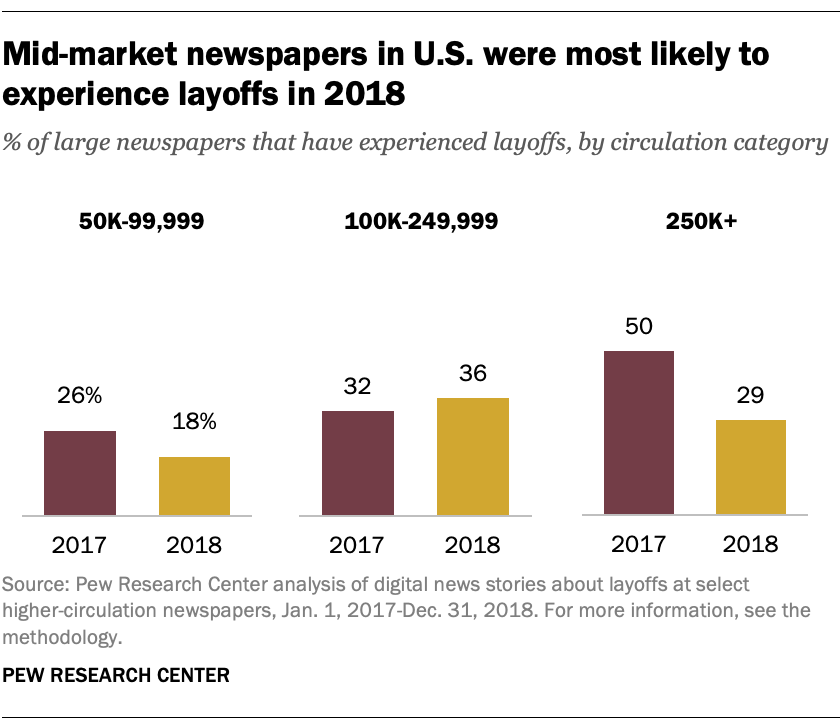 Mid-market newspapers – those with average Sunday circulations between 100,000 and 249,999 – were more likely than either lower- or higher-circulation newspapers to have experienced layoffs in 2018.

The share of layoffs at mid-market newspapers increased somewhat between 2017 and 2018, while it declined for both lower- and high-circulation papers.

The analysis tallied layoffs at daily newspapers with average Sunday circulations of at least 50,000 in the fourth quarter (as measured by the Alliance for Audited Media), as well as The Wall Street Journal, which does not report Sunday circulation to AAM. Layoffs were also tallied for digital-native news outlets with a monthly average of at least 10 million unique visitors and meeting certain criteria. For 2018, the analysis included 97 newspapers and 37 digital-native news outlets. For 2017, it included 110 newspapers and 35 digital-native news outlets. The news articles examined did not always mention the kinds of positions eliminated, so the layoffs analyzed here were not necessarily just of newsroom employees. It is possible that more layoffs occurred but did not receive media coverage, so remained under the radar of the search methods employed in this analysis.

Among the largest digital-native news outlets – those with a monthly average of at least 10 million unique visitors – 14% went through layoffs in 2018, down from 20% in 2017.

Nearly all the digital-native news outlets that laid off staff in 2017 or 2018 cut more than 10 employees. Very few, though, went through multiple rounds of layoffs in either year.

It’s important to note that around six-in-ten digital-native news sites (61%) were included in the analysis for both years. Of these outlets, few had layoffs in 2017 and 2018 (7%).