Is The El Paso Shooter’s Manifesto a Fake? 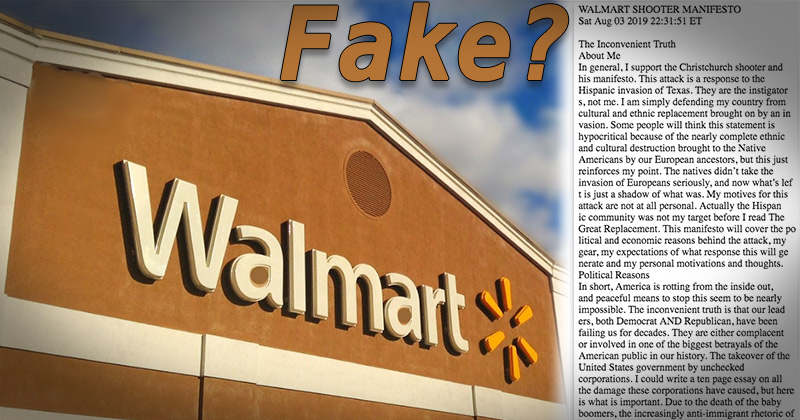 The owner of the website 8chan claims the El Paso shooter’s manifesto was not uploaded by Patrick Crusius, and another man, claiming to have grown up next to him, says “Patrick has autism and was in special ed classes… He couldn’t have written that document.”

In the aftermath of the tragic shooting at an El Paso, Texas Walmart on Saturday, the liberal media turned the blame on President Trump, other prominent conservatives and Trump supporters altogether.

Despite the fact that the suspect made it clear his views, “predate Trump,” and that he supported a universal basic income and automation, concepts no Trump supporters agree with, the media took the anti-immigrant manifesto and ran with it.

“I don’t know if he wrote it or not, but it was not uploaded by the murderer. That is clear, and law enforcement was made aware of this before most people had even heard the horrific news,” Watkins said.

Additionally, Twitter user Taylor made a 3, who claims to have grown up with Crusius, posted a message on Sunday alleging the shooter is autistic and that he couldn’t have written the manifesto.

Patrick has autism and was in special ed classes. I’ve read his weitibg. He couldn’t have written that document. Idk how this happened. He had to have been influenced by someone. He had to have had help. I grew up next to him.

It’s worth noting that based on his profile, the Twitter user making this claim is anti-Trump.

These oddities are more concerning when combined with several reports of multiple shooters and eyewitness testimony of shooters dressed in all black.

While these allegations don’t prove the manifesto was fabricated, they are worth looking into.

Last week, Alex Jones predicted that major violent events were poised to take place in the near future after the FBI designated the Q movement as a terrorist organization.

The move was likely meant to demonize patriots ahead of false flag attacks to be blamed on conservatives.