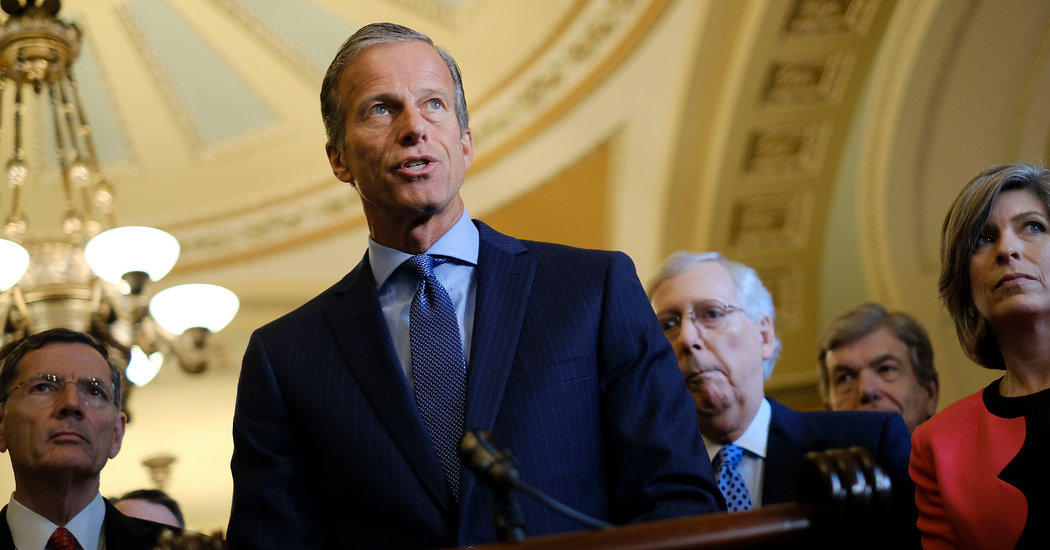 WASHINGTON — Congressional Republicans, under pressure to respond to this weekend’s massacres, appear to be coalescing around legislation to help law enforcement to take guns from those who pose an imminent danger — a measure that, if signed into law, would be the most significant gun safety legislation enacted in 20 years.

“Red flag” laws such as this might not be as momentous — or controversial — as the now-expired assault weapons ban or the instant background check system, both of which were enacted in 1994 as part of President Bill Clinton’s sprawling crime bill. But they may be politically feasible.

With President Trump endorsing the idea, a number of Republicans — including Senator John Thune of South Dakota, the No. 2 Republican — are embracing the concept. Mr. Thune told his hometown newspaper, The Argus Leader, that he was “confident Congress will be able to find common ground on the so-called red flag issue.”

Fifteen states and the District of Columbia already have red flag laws. But the push for them on Capitol Hill stops well short of the legislation mandating universal background checks that Democrats and gun control advocates — as well as a handful of Republicans — have been clamoring for. Already, Democrats are warning that Republicans will use Mr. Graham’s proposal to skirt the larger issue.

“Right now I can sense from my conversations with Republican colleagues that they are really grappling and struggling — scrambling may be too strong a word — but they are really searching for some steps that are meaningful,” Senator Richard Blumenthal, Democrat of Connecticut, who is partnering with Mr. Graham on the red flag bill, said on Tuesday. “And there’s nothing more strongly supported by the American people than background checks.”

Mr. Blumenthal and other Democrats are demanding that Mr. McConnell bring the Senate back from its August recess to pass two House bills to expand background checks to internet and gun show purchases, and to allow the F.B.I. more time to investigate a would-be gun buyer flagged by the current background check system.

“The measures that have been passed by the House are absolutely necessary,” Mr. Blumenthal said. “A red flag statute is by no means enough.”

Gun violence has been one of the most divisive and intractable issues in Washington, and even gun control advocates conceded that getting the House bill through the Senate would be a heavy lift. Senator Patrick J. Toomey, Republican of Pennsylvania, said Monday that he was reviving his background checks bill, which fell to a filibuster in 2013, and that he intended to press Mr. McConnell to bring it up if Republicans were convinced they had the votes.

“I think we need Manchin-Toomey,” Mr. Toomey said, referring to Senator Joe Manchin III, Democrat of West Virginia, his co-sponsor. “I think it’s overdue. This is a common-sense, very broadly supported measure that would fully respect the rights of law-abiding citizens, fully respect the Second Amendment.”

The evidence for whether red flag laws work to prevent gun violence is inconclusive, according to a study by the RAND Corporation of the effectiveness of gun safety measures.

But emerging evidence suggests that temporary removal laws can have a measurable effect on suicide deaths when they are implemented and used. Research in Connecticut and Indiana has found that the enforcement of the laws saved lives — about one fewer suicide death for every 10 to 20 cases of gun removals. Suicides represent around two-thirds of all gun deaths in the United States.

Jeffrey Swanson, a professor of psychiatry at Duke University, who studied the laws in both states, said his work showed that the laws could make a difference, even if they did not prevent mass shootings. Suicide “is certainly an important problem if you think about public health and mortality,” he said.

An analysis by the gun control organization Everytown for Gun Safety of mass shootings — which it defines as those in which four or more people, not including the gunman, are killed — between 2009 and 2017 found that roughly half of the gunmen exhibited warning signs before the killings.

Everytown advocates also point to the 2018 mass shooting at Marjory Stoneman Douglas High School in Parkland, Fla., where the gunman exhibited such troubling behavior, according to one neighbor, that his mother would on occasion call the police. After the massacre, which resulted in the deaths of 17 students and staff members, Florida joined a number of other states in passing red flag laws.

Gun control advocates are extremely enthusiastic about the possibility that Mr. Graham’s measure could become law. The legislation is still being drafted, and advocates have not taken a position on it. But on Monday, John Feinblatt, the president of Everytown for Gun Safety, cited red flag laws as one of his two top priorities, along with background check legislation.

“The president spoke this morning,” Mr. Feinblatt said, shortly after Mr. Trump made his Monday remarks, “and if we’re to take him at his word, what he should be doing today is calling Mitch McConnell and getting a public pledge from him that he will call the Senate back immediately and take up a bipartisan background check and red flag legislation.”

Other bills are circulating as well. Mr. Toomey and Senator Chris Coons, Democrat of Delaware, are proposing a so-called lie and try bill, which would mandate the prosecution of people who try to purchase guns even though they are ineligible.

via The New York Times https://ift.tt/2M1fvIt

« Facebook Denies Shadow Banning, Receives Patent for Shadow BanningAmazon Is Coaching Cops on How to Obtain Surveillance Footage Without a Warrant »