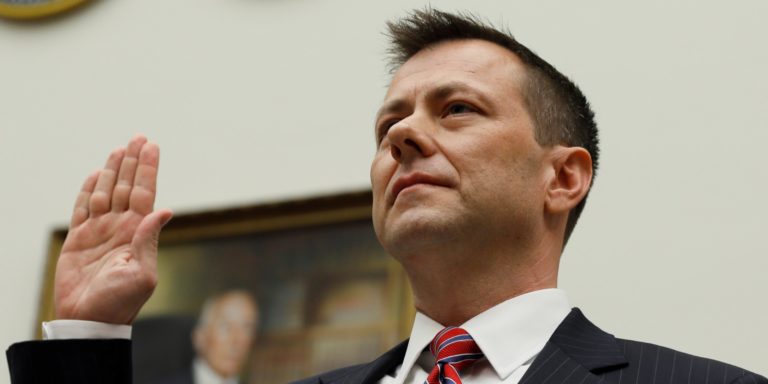 Almost one year after he was fired from his top post at FBI, Peter Strzok is back in the building and the FBI’s good graces.

“Strzok is in the (HQ) building all the time,” one FBI insider revealed. “He is taking meetings or part of meetings.”

FBI sources confirm Strzok has been granted access to FBI facilities in Washington, D.C. and its headquarters building on numerous occasions since he was sacked in August 2018.

Strzok has also not been stripped of his security clearances, an FBI insider said.

“He (Strzok) is getting in with a visitor’s badge and is involved in meetings,” one FBI insider said. “Maybe they are all trying to get their story straight before things go public.”

Such “things” include declassification of the FISA warrant the FBI used to spy on the campaign of Donald Trump. One of the warrants is scheduled to be declassified and released this summer, however FBI Director Christopher Wray is trying to delay its release, sources said.

While Americans were under the impression that Strzok was a disavowed FBI insider, that is not the case. Even top FBI officials are wondering how and why Strzok has been allowed to come back into FBI headquarters.

Likewise, FBI sources said when Strzok is not at the Hoover building he has been holding meetings with high-level DOJ brass at a location across the street from the Buerau’s Pennsylvania Avenue base.

But why? Wray is not saying.

The FBI fired Strzok, who helped lead the bureau’s investigation of Russian interference in the 2016 presidential election until officials discovered that he had been sending anti-Trump texts.

The termination was a remarkable downfall for Strzok, a 22-year member of the bureau who investigated Russian spies, defense officials accused of selling secrets to China and myriad other important cases. In the twilight of his career, Strzok was integral to two of the bureau’s most high-profile investigations: the Russia case and the inquiry into Hillary Clinton’s use of a private email server while she was secretary of state.

But when a Justice Department inspector-general investigation uncovered politically charged messages that Strzok had exchanged with FBI attorney Lisa Page, he was relegated to a position in human resources. Conservatives soon made Strzok the face of their attacks against special counsel Robert S. Mueller III’s investigation of the president’s campaign, and the FBI took steps to remove Strzok from its ranks. READ MORE:

This story is developing. — Thomas Paine