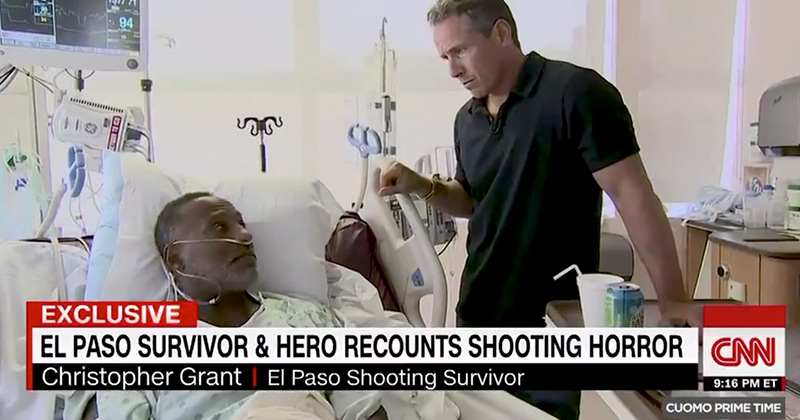 A man who survived being shot at this weekend’s El Paso, Texas Walmart shooting told CNN’s Chris Cuomo he wishes his “gun-wielding” mother was carrying her snub-nose .38 Special revolver.

The victim, Christopher Grant, talked with Cuomo from his hospital bed where he told the CNN host how he was shocked when his mother told him she left the gun at home.

“So I ran toward my mother to try to shield her and I’m like, ‘mom’ — cause my mom, she’s a gun-wielding grandma. She carries a snub-nose Smith & Wesson .38 Special with a built-in scope on it, everywhere she goes,” but his mother said she left it in her room.

“She decides ‘oh we’re just going to Walmart. I’m going to put it in my room.’ So when I went to her, no gun,” Grant explained.

After his mother “took off” amid the chaotic scene, Grant says he saw the shooter “popping people off” in the parking lot and began to hurl glass bottles at him.

Next, the shooting survivor explains how he tried to grab the shooter’s attention, saying, “To deter him I started just chunking bottles.”

“I was like, ‘Oh my God this guy’s shooting at me,’ and then, so when I got hit it was like somebody put a hand grenade in your back and pulled the pin,” he said, describing the moment he was struck by the attacker’s bullet.

Once Grant was shot, he ran through the closest door, which went to the auto department, and was met by a female Border Patrol officer he says is his “Guardian Angel.”

The federal agent then patched his wounds, took him to shelter and covered him up.

She also told Grant she left her gun at home as she was “just going to Walmart.”

Grant says the CBP officer will be “a friend for life,” because she never left his side and saved his life.

Cuomo told Grant he is a hero, but Grant disagreed and said it is what any man would do and that his father raised him that way.

Grant’s regret of not being able to access a weapon during the tragic event should be a lesson for other Americans who want to avoid feeling helpless if they’re caught in a similar situation.


via Alex Jones' Infowars: There's a war on for your mind! https://ift.tt/2ZGOxcm