After a viral photo surfaced this week revealing continuing contact between well-known Hong Kong pro-independence protest leaders and a US diplomatic officer, China has summoned US consulate officials stationed in the city, Bloomberg reports.

According to a statement from Office of the Commissioner of the Ministry of Foreign Affairs in Hong Kong, Chinese officials asked the Americans to clarify media reports that a US diplomat had contacted the local protest leaders. Bloomberg reports the clear firm message sent that "China firmly opposes any contacts with them and urges U.S. to stop sending wrong signals to violent law breakers in Hong Kong." 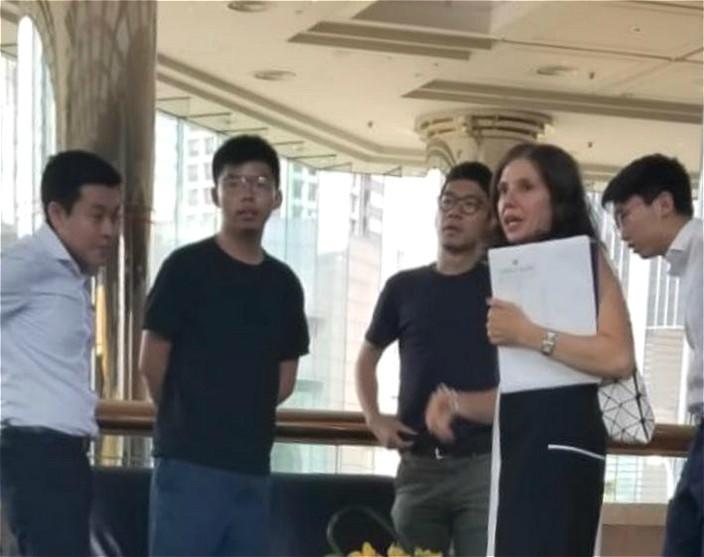 As well organized anti-Beijing protests have raged and continued to escalate this summer over the deeply controversial extradition bill, Beijing authorities have blamed a US "hidden hand" for fueling the crisis.

Pro-Beijing publications reported that protest leaders Joshua Wong and Nathan Law had met with American consular official Julie Eadeh in the late afternoon on Tuesday at the JW Marriott Hotel in the Admiralty area of Hong Kong.

The viral photograph confirms the meeting took place and is driving outrage in China. State media claimed Eadeh - identified as the political unit chief of US Consulate General - met with the activists to discuss plans regarding the controversial extradition bill.

There were reports suggesting Julie Eadeh is a trained subversion expert at the US consulate in Hong Kong. Her meeting with HK protesters would be evidence of US inciting and instigating the riots in Hong Kong. Is she under the direct order of former CIA chief Mike Pompeo? pic.twitter.com/jHazIpMM4K

According to the UK's The Standard, Joshua Wong brushed off the significance of the meeting while admitting it did happen:


Wong dismissed the allegation following an inquiry by The Standard, saying: "I even went to Washington several times, so what's so special about meeting a US Consul?"

Wong explained he did meet with the US official to discuss the extradition bill, but also in order to urge the United States to cease exports of tear gas and rubber bullets to the Hong Kong SAR government.

🇭🇰A photo taken by a passerby shows the meeting between HK separatists and Julie Eadeh, the political unit chief of USCG, at JW Marriott Hotel at 5 pm Thursday. It's wildly used by local media, as an evidence of how close the US politicians are related to the anti-gov't movements pic.twitter.com/FBE8Jxvsy9

It wasn't his first meeting with US officials, Wong stated further: "We also met the US Consul that visited the Legislative Council and have a meeting with pro-establishment and pan-democrat legislators," he said in a statement.


The contact between the anti-China force and a US diplomat is "solid evidence" the US is behind the riots in Hong Kong, Li Haidong, a professor with the China Foreign Affairs University's Institute of International Relations in Beijing, told the Global Times. — China's Global Times

Likely, Wong statements will not appease Chinese media and authorities who point to this as proof of US subversive action against Beijing inside the semi-autonomous city.

Eadeh has been engaged in diplomatic missions from Baghdad to Beirut to Jerusalem to Taipei and Shanghai during her lengthy career with the State Department, according to a short biographical essay she recently penned for Georgetown University's School of Foreign Service.

State media pundits have pointed to her career stationed in political hot spots and war zones such as Beirut during the 2006 war and in Baghdad and Mosul. Covert CIA officers often post as State Department consular staff in order to conceal their identity, while also giving them diplomatic immunity in host countries.

One columnist for the Communist Party state newspaper, China Daily, went so far as to say the US diplomatic meeting with protesters points to CIA involvement in the unrest on Hong Kong's streets.


There were reports suggesting Julie Eadeh is a trained subversion expert at the US consulate in Hong Kong. Her meeting with HK protesters would be evidence of US inciting and instigating the riots in Hong Kong. Is she under the direct order of former CIA chief Mike Pompeo?

Whether this is the case or not, we can imaging how US officials would react if Chinese or Russian diplomats were photographed meeting with American anti-government protesters at a moment of serious unrest in US cities.