Another Gaffe: Joe Biden Says ‘We Choose Truth over Facts' 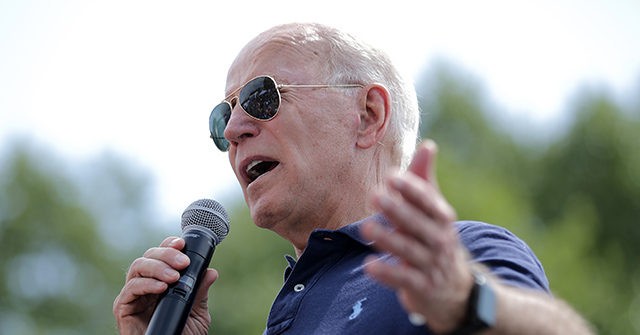 Former Vice President Joe Biden on Thursday suffered yet another gaffe on the presidential campaign trail, telling attendees of the Iowa State Fair Thursday that “we choose truth over facts.”

“There is nothing we’ve ever decided to do we’ve been unable to do”, Biden, 76, told the crowd as he wrapped up his speech. “Period. That’s not hyperbole. We have never, never, never failed when we’re together. And ladies and gentlemen, it’s time to get up.”


“Everybody knows who Donald Trump is. Even his supporters know who he is. We got to let him know who we are. We choose unity over division. We choose science over fiction. We choose truth over facts,” the 2020 frontrunner concluded, leaving the crowd confused.

The “truth over facts” gaffe appears to be a mixup on an applause line he has used before in his comeback campaign: “we have to choose hope over fear, unity over division and, maybe most importantly, truth over lies.”

The blunder was Biden’s third in 24 hours.

Addressing the Asian and Latino Coalition in Des Moines, Iowa, earlier Thursday, Biden mixed up for the second time the name of the former British Prime Minister Theresa May with Margaret Thatcher – who left office in 1990. The flub came as he was falsely claiming President Donald Trump called neo-Nazis protesting in Charlottesville, Virginia in 2017 “very fine people.”

“Words that stunned the nation, and I would argue – I know – shocked the world. International leaders spoke about it,” said the former vice president.

“You had people like Margaret Tha… excuse me,” he added, before catching his verbal slip-up. “You had people like the former chairman and the leader of the party in Germany. You had Angela Merkel stand up and say how terrible it was. International leaders looked at us like, ‘what in God’s name is happening to the United States of America?'”

Biden made a similar gaffe during a campaign rally in Columbia, South Carolina, in May.


Biden made his most embarrassing gaffe later in his the Asian and Latino Coalition speech, claiming that “poor kids are just as bright and just as talented as white kids.”

of his plans to reform the United States’ education system. “We have this notion that somehow if you’re poor you cannot do it, poor kids are just as bright and just as talented as white kids.”

He then quickly attempted to clarify his comments, adding “wealthy kids, black kids, Asian kids” to his last comment.

Biden’s flubs have been a permanent feature of the candidate’s campaign. Last Sunday, Biden mistakenly referring to Houston and Michigan as the sites of two recent mass shootings that occurred in El Paso, Texas, and Dayton, Ohio.