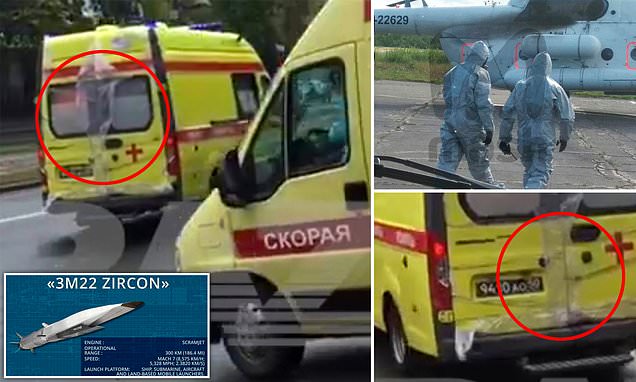 Alarming footage also shows men in protective clothing loading casualties into the vehicles ahead of their transfer for treatment at Burnasyan Federal Medical Biophysical Centre in Moscow.

Earlier the clothes of the victims and the medics who first treated them were destroyed, it was reported.

It comes after two were killed and six injured in a blast at the Nyonoksa weapons testing site in the sub-Arctic Arkhangelsk region yesterday. Moscow has thrown a veil of secrecy over the incident.

Radiation levels are said to have temporarily soared 20 times above the normal level in Severodvinsk, a city 18 miles away, sparking 'panic' and 'hysteria' and a rush to buy iodine from pharmacies.

Today, reports surfaced in Russia claiming the spike in radiation may have been caused when one of Vladimir Putin's top secret Zircon hypersonic missiles exploded during tests.

Six people injured in a mysterious Russian military accident suffered serious radiation doses as well as injuries from an explosion, according to a new report

A video shows some of the wounded military men being moved to a hospital in Arkhangelsk before their reported transfer to Moscow where they are due to be treated at the Burnasyan Federal Medical Biophysical Centre, it was reported

The 3M22 Zircon (pictured above) is an anti-ship hypersonic cruise missile developed by Russia which can also be used to attack land targets. Testing on the Zircon began in 2012 and by 2017, the scramjet missile was reported to have hit eight times the speed of sound

The Zircon - or Tsirkon - with its Mach 8 missile has been identified by Moscow's state-controlled TV as Putin's weapon of choice to wipe out American cities in the event of nuclear war.

Tests were reportedly due in the latter part of 2019 but there was no official confirmation that the Zircon - developed in secrecy - was involved in Thursday's incident at a base used for virtually all naval missile tests.

The six had suffered both radiation and explosives injuries, it was claimed.

The latest report says the men were injured during an explosion to test a new type of engine on a naval vessel. An 'emeregncy situation' arose and there was an 'explosion'.

A video shows some of the wounded military men being moved to a hospital in Arkhangelsk before their reported transfer to Moscow where they are due to be treated at the Burnasyan Federal Medical Biophysical Centre, it was reported.

The number of dead was given by BAZA as two or three with 15 injured including six who suffered from explosive and radiation injuries.

The news outlet, which has links to law enforcement and military named the most serious victims as Igor Berezin, Sergey Plaksin, Alexey Perepelkin, Dmitry Abalin, Alexander Manusin and Sergey Grishin.


It is suspected that the military accident that took place yesterday in Nyonoksa (pictured on the map above) was caused by a testing incident with Russia's hypersonic Zircon missile. A town 18 miles from Nyonoksa saw radiation levels temporarily rise to 20 times their usual level


Defence ministry sources said that the men's cloths had been burned as soon as they were hospitalised with suspected radiation.

The scale of local panic in the aftermath of the radiation spike' incident was revealed today, as a video emerged showing the wounded being transported by helicopter to a regional hospital in Arkhangelsk.

There was 'mass hysteria' among residents 'because of the radiation rumours' reported a local radio station in Severodvinsk.

This led to a rush to buy iodine-containing medicines which quickly sold out from pharmacies.

Some displayed signs to say they had no iodine left.

In local hospitals people were recommended to drink half a glass of milk with 44 drops of iodine for adults and 22 drops for children under 14, said one report.

Other residents in Severodvinsk and nearby Nyonoksa sought to buy vodka and wine, said local reports.

But they also highlighted a a pocket radiation counter with a normal reading.

The Russian health ministry denied any medical concerns among the general population after claims of a radiation spike.


The Nyonoska testing site, pictured above, is reportedly the location of trials for Putin's new Zircon missile


'Civilians and residents of neighbouring populated localities were not hurt,' the ministry said.

Ksenia Yudina, a spokeswoman for the city government in Severodvinsk had said: 'A short-term rise in background radiation was recorded at noon.'

But the military authorities played down any danger.

'There have been no harmful discharges into the atmosphere, and radiation levels are normal,' said a spokesman.

Ekho Severa radio accused the Russian Emergencies Ministry of failing to give clear information on the incident to the media.

'We want to stress that yet again the Ministry of Emergencies press services refuses to communicate with the media,' said one report.

'There are no updates from them.'

In an extraordinary move, Dmitry Chistyakov, head of press service of Archangelsk region's Emergencies Ministry, revealed he had been banned from answering media questions on the incident.

He told the media: 'Colleagues, to my deepest personal regret I am banned from commenting the situation in Nyonoksa.

'I have received so many calls and didn't take about 40.'

But he said that in Severodvinsk and Nyonoksa 'the radiation is normal at 12 mkr/h.'

Greenpeace has written to environmental watchdogs in Russia and neighbouring Norway calling on them 'to investigate the consequences of the explosion.'

Rashid Alimov, energy specialist with the organisation in Russia, called for details of the radionuclides recorded in the air.

'Apparently, in Severodvinsk there really was a short-term leap - this may indicate the presence in the air of alpha and beta active radionuclides, which are dangerous,' he said.

'And in the immediate place of the explosion, the level have have been higher.'

'They should be treated calmly. This was a test. A negative result is also a result.


A local resident is pictured showing his geiger counter in Severodvinsk. Radiation levels temporarily soared 20 times above the normal level


'In order for a missile to fly, you need to test all its components: engines, fuel - everything.'

He forecast the Russian authorities would give scant detail of the incident.

Only those who participated could say what went wrong.

'Yet no one will name all the reasons,' he said. 'This requires an investigation.

'It is not known what kind of explosion, the volume, or scale. There is no such information yet. '

News agency 29.ru reported: 'We found not a single bottle of iodine in six pharmacies.

'We spoke to 15 assistants in other chemists' who said there was an enormous rise in demand for iodine in the second half of the day in both Severodvinsk and Nyonoksa.'

One local named Sergey Dolgushin from Severodvinsk said: 'Usually if the authorities say that everything is okay it means the exact opposite.

'This is exactly how they were lying to people at Chernobyl.'

Deep secrecy has surrounded tests and designs of the Zircon, which Putin claims is unmatched by any Western missile.

In May it was reported that trials launching the missile from a naval vessel would be started later in 2019.

'The Admiral Gorshkov-class frigate, also known as Project 22350, from the Northern Fleet will be used.'

The report was cited to an unnamed source in the Russian 'military-industrial complex.'

The Russian defence ministry did not immediately officially confirm the TASS report.

Previously it is believed that the shark-nosed Zircon has been tested at least five times from land-based sites, and is capable of a speed of 1.7 miles per second.

In June 2017 the missile reached eight times the speed of sound, according to reports.

The Royal Navy's Sea Ceptor surface-to-air missile is reportedly only capable of intercepting targets flying up to Mach 3.

Hypersonic cruise missile Zircon is designed to be used against ships or land-based targets, and to enter production in 2021, commencing service the following year.

In April, Dmitry Kiselyov, presenter of Russia's main weekly TV news show Vesti Nedeli, showed on screen a map of the US identifying targets he claimed Moscow would want to hit in a nuclear war.

Kiselyov, seen as a top Putin propagandist, said the Zircon missile could hit the targets in less than five minutes.

Putin warned this year that the West is seeking to steal secrets relating to Zircon and other state-of-the-art Russian weapons such as the Avangard.

He told his FSB counter-intelligence service: 'That means that your work should become even more effective.'