Clashes broke out between Muslim protesters and Israeli police forces on Jerusalem’s Temple Mount holy site on Sunday, during a period of peak religious tensions over the confluence of Jewish and Muslim holy days.

At least 61 Muslim worshipers were injured in the clashes, according to the Red Crescent. At least four officers were also lightly-to-moderately wounded, police said.

Sunday marks both the start of Eid al-Adha, an Islamic holiday commemorating the end of the annual hajj pilgrimage to Mecca, and the Jewish fast day of Tisha B’Av, when Jews mourn the destruction of the temples that once stood on the Temple Mount and other disasters in Jewish history.

Following a security assessment, police said non-Muslims would be barred from entering the Temple Mount, where tens of thousands of Muslim worshipers had arrived during the morning. Hundreds of Jews had gathered at the gates leading to the holy site on Sunday morning.

After another security assessment, some Jewish visitors were allowed to enter the site. 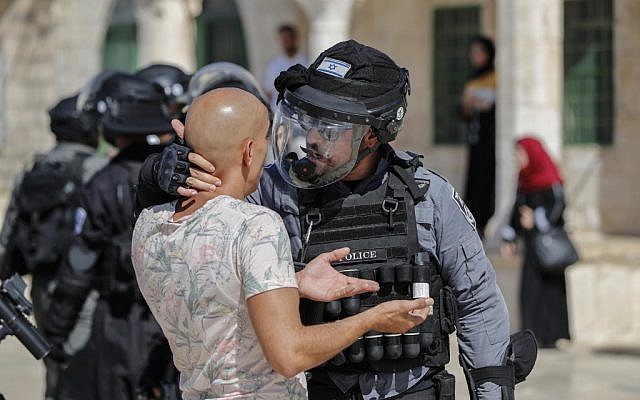 An Israeli soldier scuffles with a Palestinian at the Temple Mount/al-Aqsa Mosque compound in the Old City of Jerusalem on August 11, 2019 (Ahmad GHARABLI / AFP)

Several dozen visited under close police escort and Muslim worshipers began throwing chairs and other objects at the group. The Jewish visitors left the compound shortly thereafter. Army Radio put the number of Jewish visitors at 150, and said they had been allowed a shorter-than-usual tour of the site.

Palestine TV, the official Palestinian Authority television channel, reported that the Jewish visitors entered and exited the Temple Mount within a few minutes.

According to police, Muslim worshipers began rioting and making “nationalistic calls” on the Temple Mount on Sunday morning. 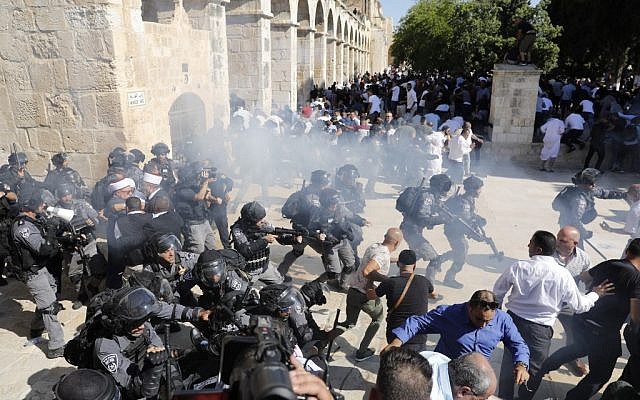 Israeli security forces clash with Muslim worshipers at the Temple Mount compound in the Old City of Jerusalem on August 11, 2019. (Ahmad Gharabli/AFP)

The police said officers were “working to break up the rioters in order to restore public order.”

Police had deployed additional forces throughout Jerusalem in expectation of violence throughout the day.

The closure of the holy site to Jewish visitors on Tisha B’Av drew considerable criticism from right-wing politicians and launched a minor exchange of incriminations for who was behind the move.

Right-wing politicians blamed Prime Minister Benjamin Netanyahu for the move, with the United Right party condemning it as “disgraceful” and calling on him to reverse the ban.

A source in the Prime Minister’s Office denied Netanyahu ordered the closure, saying whether to allow entry to the Temple Mount is determined in accordance with police assessments of the situation.

“At no stage did Prime Minister Netanyahu give the instruction to close entry to the Temple Mount,” the source said. 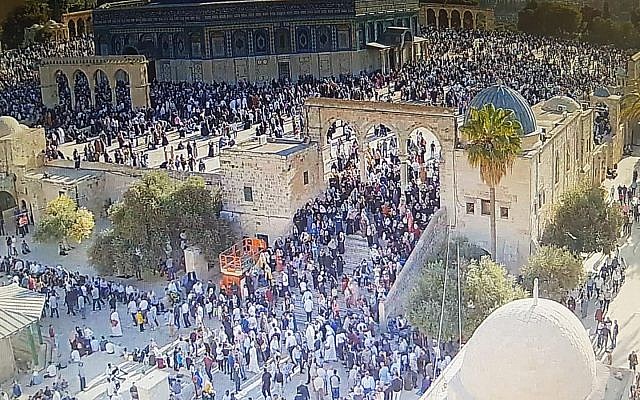 Muslim worshipers visit the Temple Mount in the Old City of Jerusalem on August 11, 2019, to mark the Islamic holiday of Eid al-Adha. (Israel Police)

Last week, representatives from the police, Shin Bet security service and Public Security Ministry presented the prime minister with their assessments and recommendations for Sunday’s Eid al-Adha and Tisha B’Av on the Temple Mount, indicating that Netanyahu would have been aware of their decision and given tacit approval.

The prime minister also has the power to override the police’s decisions regarding the holy site.

Transportation Minister Bezalel Smotrich, a member of United Right, said that banning Jewish visitors was “shameful and a disgrace.”

Late Saturday night, a number of men surrounded and attacked a car driven by a Jewish man in an Arab neighborhood adjacent to the Old City, before a police officer drove them away by firing his gun into the air. Two suspects were later apprehended, police said Sunday.

“The decision is a surrender to Arab terrorism and violence at the holiest place in Judaism is why there is a loss of deterrence in other areas,” he said.

Israeli authorities traditionally close the Temple Mount to non-Muslims during Islamic holidays, to keep religious tensions from boiling over, but exceptions have been made when Jewish holidays coincide.

In June, police allowed Jewish visitors onto the site on Jerusalem Day, which fell this year during the final days of Ramadan, sparking clashes between Muslims and police.

On Friday, the Muslim Waqf trust, which oversees the site, urged Muslim worshipers to crowd the Al-Aqsa Mosque on the Temple Mount to keep Jews from visiting, after police said they would consider allowing non-Muslims to visit the holy site.

Last year, a record number of Jews were reported to have visited the Temple Mount for Tisha B’Av, leading to rebukes from the Palestinian Authority and Jordan, which manages the compound through the Waqf.

On Saturday night, small-scale scuffles broke out between police and East Jerusalem Palestinians at the Damascus Gate of the Old City of Jerusalem, as an annual right-wing march around the Old City walls passed. 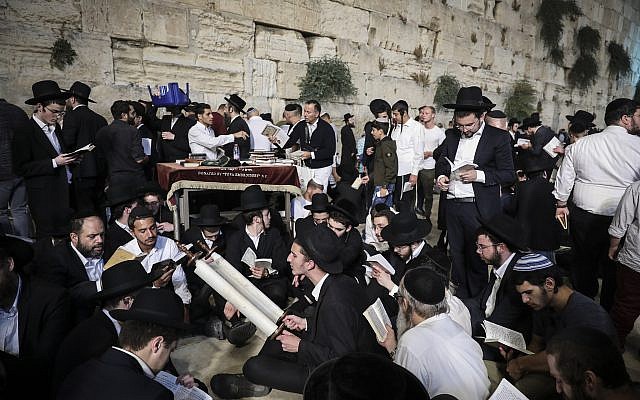 Jewish men pray at the Western Wall on the eve of Tisha B’Av in the Old City of Jerusalem, on August 10, 2019. (Noam Revkin Fenton/Flash90)

During the night, thousands of Jewish worshipers visited the Western Wall, the closest spot to the Temple Mount where Jews can pray, to read Lamentations and other traditional Tisha B’av liturgy.

Under an arrangement in place since Israel’s victory in the 1967 Six Day war, non-Muslims are allowed to visit the Temple Mount but not to pray there. Jews in religious garb are allowed to enter in small groups during limited hours, but are taken through a predetermined route, are closely watched and are prohibited from praying or displaying any religious or national symbols.

In a statement Friday, Grand Mufti of Jerusalem Mohammed Hussein, former grand mufti of Jerusalem Ekrima Sabri and senior Waqf official Abdel Azeem Sahlab said all mosques in Jerusalem but al-Aqsa would be closed Sunday so as many worshipers as possible would come to the compound.

They said the move was in response to police announcing they would consider allowing Jews to ascend the holy site.

“The people of Jerusalem and its surroundings will stand together in the face of the ambitions of the settlers,” they said in a statement, referring to visits by non-Muslims.

Bassem Abu Labda, a Waqf official, said in a phone call that Israel would be “wise” to bar Jews from the Temple Mount on Sunday.

AP contributed to this report.


via The Times of Israel https://ift.tt/2YWQCjk