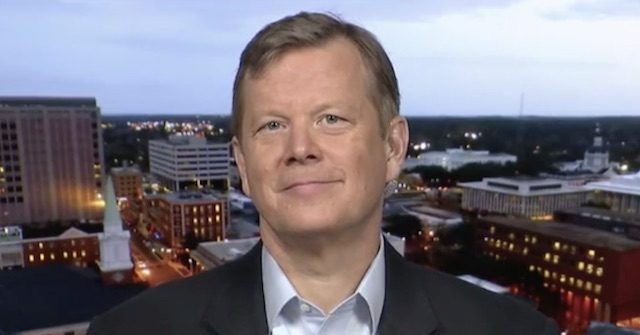 During Thursday’s broadcast of Fox Business Network’s “Lou Dobbs Tonight,” Government Accountability Institute president and Breitbart News senior contributor Peter Schweizer argued the Trump administration’s Department of Justice should take a look at the politics of Google as they pertain to the company’s search algorithms.

Schweizer pointed to the revolving door between Google and the former Obama administration, which he said ought to be a red flag for the Justice Department.

DOBBS: Joining us tonight, Peter Schweizer. New York Times bestselling author, president of the Government Accountability is — Accountability Institute and host of a new investigative series entitled The Drill Down. Peter, great to have you with us. Let’s start —

SCHWEIZER: It’s good to be with you as always, Lou.

DOBBS: Eric Schmidt, I can’t imagine that he would support advise council, a Democratic candidate. It’s just — this is to me fascinating that there is not more of an inquiry into Google itself. And what they’ve done is just extraordinary in terms of all the visits or executives paid to President Obama during his time in the White House. I believe they were the most representative of any firm or maybe entity — private entity in the country.

SCHWEIZER: No, you’re exactly right. I mean, we are all familiar with the term revolving door and people think of it, you know, defense contractors going in and out of the Pentagon. Well, in the Obama administration, Google was the number one company that had executives visiting the White House. And you had something like a couple hundred I believe Google executives who left Google, went to work in the Obama administration and then went back to Google.

Look, people have the right to do these things. The problem is a company like Google has the power and has the inclination to dramatically influence an election in a way that nobody can know about it. They can manipulate the algorithm, you’ve got whistleblowers that say that they’ve done that, you’ve got internal documents that have been leaked that have done that.

SCHWEIZER: — in favor of Liberal Democratic candidates. That’s a campaign violation and it needs to be investigated.

DOBBS: And do you think this administration will certainly would seem a Republican administration should? I’m sure that the Democrats would have returned the favor had it worked out the other way.

SCHWEIZER: Yes, I mean, imagine if you had a big high-tech firm that was run by conservatives and that there have been allegations that they were helping certain political campaigns in certain ways, you can believe. And I think honestly, they’d be rightfully — you know, capable of doing this is to send some Department of Justice prosecutors over there to start poking and looking around.

I mean, you know, if we’re concerned about campaign violations of you know, people giving to a candidate by donating to their sister and having their sister give in straw donations like that a prosecutor. My goodness, we ought to be looking and investigating one of the largest corporations in America which has been charged by some of its own former employees of tipping the scales in favor of certain political candidates.

SCHWEIZER: It’s a slam dunk and I hope the Trump administration does that.