At the start of August, we explained how - by scapegoating the global economy for the Fed's July 31 rate cut - the central bank had now trapped itself, having certified before the world that any further escalations in Trump's trade war are effectively a justification for more rate cuts. Whether this was Powell's intention is unclear, although as we said at the time, "it certainly means that Trump is now de facto in charge of the Fed's monetary policy by way of US foreign policy, and it also means that as BofA wrote, "the Fed is unintentionally underwriting the trade war."

Here, the only thing one can perhaps add is that the Fed may very well be intentionally underwriting Trump's trade war. In either case, as Bank of America's chief economist Michelle Meyer said, such a circular framework is a problem for many reasons, and as the bank admits, it is worried about an adverse feedback loop where the trade war hinders economic growth, therefore prompting additional Fed easing, which in turn allows for greater trade war escalation. This is shown in the chart below. 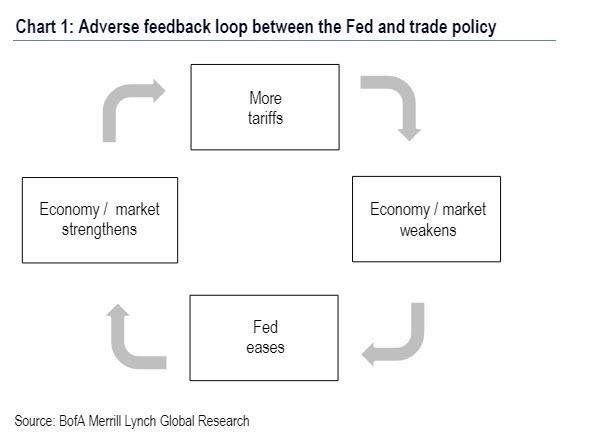 Fast forward to today, when in what in retrospect may be seen as a watershed moment in exposing just how "political" the Federal Reserve always has been despite repeated lies by various officials claiming otherwise, none other than former Goldman chief economist and the former head of the NY Fed, Bill Dudley, after looking at the chart above and having realized that the Fed is underwriting Trump's trade war, made a "modest proposal" in a Bloomberg op-ed in which he advised Powell to take a political stand against enabling Trump's trade war, and potentially go so far as to push the economy into a recession to prevent Trump from getting reelected!

Echoing what Powell said in his Jackson Hole speech, where he dedicated a section to Trump's ongoing trade wars, and blaming them for the Fed's rising inability to interfere in the US economy, Dudley begins with what is a clear political statement, arguing that "Donald Trump’s trade war with China keeps undermining the confidence of businesses and consumers, worsening the economic outlook."

Dudley, who was among those globalists who enabled China's tremendous ascent, and assured that Beijing will surpass the US economically and militarily at some point by 2032 if the status quo is left unchanged... 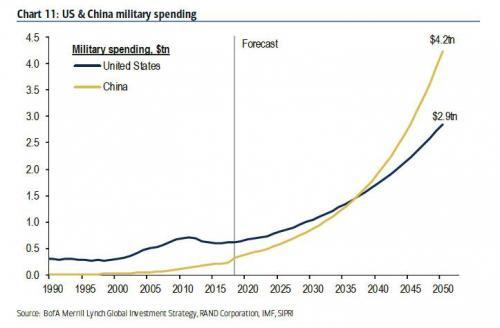 ... ignores the consequences of his actions, and instead slams Trump for being the one president willing to challenge China's hegemonic ascent and upcoming Thucydides Trap (which as we noted before virtually assures war with China if nothing is done), saying that "this manufactured disaster-in-the-making presents the Federal Reserve with a dilemma: Should it mitigate the damage by providing offsetting stimulus, or refuse to play along?"

Dudley's advice: "If the ultimate goal is a healthy economy, the Fed should seriously consider the latter approach."

While Dudley then spend the bulks of his op-ed explaining the diagram shown at the top, a relationship which our readers are already familiar with, what is of particular note is Dudley's discussion of why the Fed should 'refuse to play along' and refuse to underwrite, as BofA said, Trump's trade war.

One thing Dudley recommends is that "the Fed could go much further" beyond merely warning, as Powell did, that the Fed's tools are not suited to mitigating the damage from trade war, but "could state explicitly that the central bank won’t bail out an administration that keeps making bad choices on trade policy, making it abundantly clear that Trump will own the consequences of his actions."

What immediately stands out here is that it is only Bill Dudley's subjective opinion that Trump is making "bad choices" on trade policy, an argument that immediately becomes political when one considers that Trump was elected on a platform of, among other things, reducing the US-China trade deficit and, by extension, limiting China's economic growth which if left unchecked, would assure war between the two superpowers.

No, instead to Dudley, what a myopic Trump should focus on is today and tomorrow, and leave the long-term to someone else. In other words, do precisely what the Fed has been doing for decades, even though as Mark Carney recently hinted, it was the Fed's monetary policy, that has been responsible for much of the world's crises and wars. You won't find a discussion of that in Dudley's brief op-ed, however.

Going back to Dudley's argument, the former Goldman banker claims that "such a harder line could benefit the Fed and the economy in three ways".

Here the narrative gets downright absurd, because while Dudley refers to the Fed as apolitical, underscoring that further in the next paragraph where he says that "I understand and support Fed officials’ desire to remain apolitical", he immediately refutes himself by admitting that the Fed has never been apolitical and in fact, it is the US central bank that, through its actions chooses who the US president is, to wit:


Central bank officials face a choice: enable the Trump administration to continue down a disastrous path of trade war escalation, or send a clear signal that if the administration does so, the president, not the Fed, will bear the risks — including the risk of losing the next election.

And the punchline: "There’s even an argument that the election itself falls within the Fed’s purview."

Translation: "there is even an argument", Dudley implies, that the Fed should crush the economy (arguably by hiking or not cutting rates) and start the next recession, thereby preventing Trump from getting re-elected.

And while we appreciate Dudley's de facto confirmation of what we have said for years, namely that the Fed is not only a political entity, one which picks the US president as the former NY Fed president admitted, but that the Fed is an even more powerful entity than the top US executive (an entity which as Bernanke's former advisor once said: "people would be stunned to know the extent to which the Fed is privately owned"). One hopes that finally a discussion can take place, whether in Congress or elsewhere, if such an entity should exist.

As for Dudley's "modest proposal", we look forward to Trump's response, because if there is one thing the US president needed in writing, it was just such an op-ed, one written from a former Fed member to the current Fed chair, recommending what amounts to mutiny against Trump should Trump proceed with his current course of action. Because if things don't work out, well Trump now has documentary evidence that, by extension, the Fed also had the ability to ensure his re-election, and if things seem like they are headed off course on the way to November 2020, we will sit back and enjoy as the war between Trump and the Fed goes nuclear.