Facebook has suspended another meme page over a pro-Infowars meme that dunked on CNN.

“The admin of the Memelord For Hire MKIII Facebook meme page received multiple 30-day suspensions in a censorship blitz kicked off by a meme that supported InfoWars,” reports NationalFile.com. 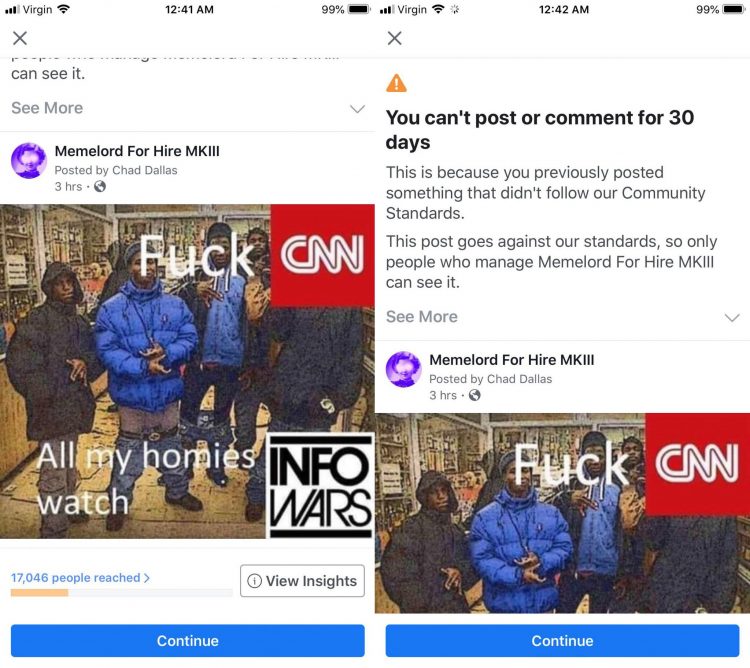 Image credit: Chad Dallas/NationalFile.com
Dallas says Facebook soon found more memes they claimed were in violation of their terms of service, and threatened to suspend the page entirely.

Meanwhile, Facebook users who attempted to “like” the Memelord For Hire MKIII page, followed by over 50,000, were presented messages warning them to review the page’s content prior to subscribing.

“The most irritating part of this whole debacle is Facebook could easily just delete my page for having the wrong opinions and be done with it,” Dallas told National File.

“They haven’t, because they’re cowards, and they need a reason to justify banning a harmless satire page that criticizes all sides of the political spectrum. Hence the trumped-up ‘Community Standards violations.'”

I think this is #winning…

At launch, the https://t.co/uQTHWTzRni is already banned on @facebook pic.twitter.com/MY0AhOANKm