The Hezbollah terror group fired several anti-tank guided missiles at an army base and a military ambulance just inside northern Israel’s border with Lebanon on Sunday afternoon, causing no injuries, the Israel Defense Forces said.

Miiltary sources said that the ambulance, clearly marked with a red Jewish star, was empty when it was struck, but that soldiers had been inside half-an-hour earlier.

In response, the Israeli military said its artillery cannons and attack helicopters fired approximately 100 shells and bombs at Hezbollah targets in southern Lebanon.

IDF spokesman Lt. Col. Jonathan Conricus said the IDF considered the “tactical event on the ground” to be over as of Sunday evening, but that the larger strategic threat posed by Hezbollah on the border remained. The IDF remained on high alert Sunday evening, officials said.

Prime Minister Benjamin Netanyahu said no Israelis were so much as “scratched” by the Hezbollah attack. “There were no Israeli injuries, not even a scratch,” Netanyahu said, smiling, at the opening of a Honduras diplomatic office in Jerusalem.

The military said Hezbollah operatives fired two or three missiles at a battalion headquarters outside of the Israeli community of Avivim and at military vehicles nearby shortly after 4:15 p.m. Sunday. Several of the projectiles struck their targets but did not cause any casualties, despite claims to the contrary by Hezbollah, the IDF said. 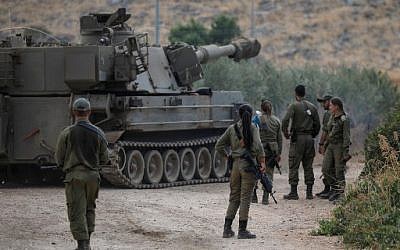 Israeli soldiers stand next to a self-propelled artillery gun near the Lebanese border outside the northern Israeli town of Kiryat Shemona on August 31, 2019. (JALAA MAREY / AFP)

The Iran-backed terror group took responsibility for the missile strikes, saying in a statement that its fighters “destroyed an ‘Israeli’ military vehicle on the Avivim barracks road [in northern Israel]… and injured those in it.” Hezbollah later said it targeted an armored personnel carrier.

Conricus denied the claims, stressing that no soldiers were injured in the attacks and that the target was a military ambulance — an armored “Ze’ev”-style jeep that was clearly marked as such with a red Jewish star painted on the side of the vehicle.

Two soldiers were flown to Haifa’s Rambam Medical Center, but were discharged. It was not immediately clear if there was legitimate concern that the troops had been injured or if this was an attempt at psychological warfare.

Soldiers had been inside the vehicle, which can hold up to eight people, approximately half an hour before the attack, the army said.

The IDF spokesman said the armored ambulance was destroyed and that the army base outside Avivim was damaged.

“The IDF returned fire at the [missile-launching squads] at targets in southern Lebanon,” the army said in a statement.

Lebanese media reported that the IDF bombed sites near the Lebanese border town of Maroun al-Ras.

Hezbollah indicated that the missile attack was in response to an airstrike by the IDF last Saturday night that targeted an Iranian-led plot to bomb northern Israel with armed drones, killing several Iranian operatives, including two Hezbollah members. The terror group said the cell that carried out the missile strike was named for its two fallen operatives: Hassan Zabeeb and Yasser Daher.

Further stoking the flames last week was a drone attack in Beirut — blamed on Israel — that reportedly destroyed key components of a joint Hezbollah-Iran project to manufacture precision-guided missiles in Lebanon.

Photographs that were shared on social media from Avivim in the Upper Galilee region of northern Israel Sunday afternoon showed large plumes of smoke rising outside the community following the attack.

After the strike, the Israeli military called on all communities within four kilometers (2.5 miles) of the Lebanese border to open their bomb shelters. In addition, the military called on residents to avoid approaching the security fence, including for farm work. The IDF also urged residents of the area not to travel on open roads near the border.

Prime Minister Benjamin Netanyahu said he was receiving constant updates on the situation along the northern border and had spoken with IDF Chief of Staff Aviv Kohavi, the head of the Shin Bet security service Nadav Argaman, National Security Adviser Meir Ben-Shabbat and other senior defense officials.

United Nations peacekeepers were in contact with Israeli and Lebanese officials in an effort to contain the violence along the border.

“As UNIFIL is following up on the firing across the Blue Line, UNIFIL Force Commander and Head of Mission Major General Stefano Del Col is in contact with the parties urging the maximum restraint and asked to cease all activities endangering the cessation of hostilities,” the UN peacekeepers said in a statement.

Earlier in the day, the Israeli military reportedly fired artillery shells into a disputed portion of land on the Lebanese border. The Israel Defense Forces only confirmed conducting “activities” in northern Israel, which sparked a fire near the border, refusing to comment on the nature of those actions.

According to the Hezbollah-affiliated Al-Manar news outlet, the IDF fired the shells into the hills outside of the village of Kfar Chouba, next to a contested area along the border, known in Israel as Mount Dov and in Lebanon as Shebaa Farms.

The Lebanese Armed Forces said in a statement that an Israeli drone also dropped an incendiary device nearby, sparking a small fire that was extinguished by residents of the area.

Al-Manar shared photographs of artillery shells it said were fired by the IDF into the area.

On Saturday night, Hezbollah leader Hassan Nasrallah threatened that a Lebanese response to last week’s events could strike anywhere along the border, including Mount Dov, the site of a reprisal attack by Hezbollah in 2015 after several senior members of the group were killed in an airstrike attributed to Israel. Two Israeli soldiers were killed in the retaliatory strike and seven were injured. 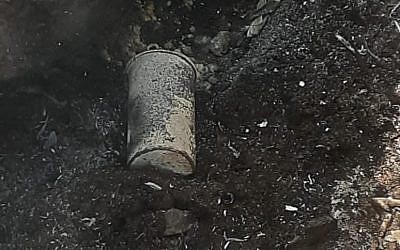 An artillery shell reportedly fired by Israel into the contested Mount Dov area along the Israel-Lebanon border on September 1, 2019. (Twitter)

Mount Dov and the adjacent Kfar Chouba hills are small patches of land captured by Israel from Syria during the Six Day War in 1967 and kept under Israel’s control since. Lebanon maintains that the strip of land is its territory, though it was under Syrian control from the 1950s until it was captured in 1967 along with the Golan Heights.

In light of the terror group’s threats, the Israeli military canceled a major exercise planned for this week, restricted soldiers’ movements in vulnerable areas, canceled weekend leave for troops in the IDF Northern Command and reportedly sent artillery and other heavy equipment to the Lebanese border in recent days.

“In the past week, IDF troops — including ground, air, naval and intelligence forces — have improved their preparedness for a variety of scenarios in the area of the Northern Command and the Galilee Division,” the army said in a statement.

IDF Chief of Staff Aviv Kohavi also ordered IDF Spokesperson Ronen Manelis, who was due to finish his tenure this week, to remain in his position for the time being in light of the heightened tensions. The army said Manelis’s successor — Brig. Gen. Hidai Zilberman — will take over the role at another time. 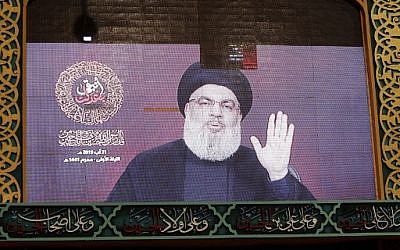 A speech by Hezbollah chief Hassan Nasrallah is transmitted on a large screen in the Lebanese capital Beirut’s southern suburbs on August 31, 2019. (Photo by ANWAR AMRO / AFP)

“I am telling residents of the north and residents of all of occupied Palestine: do not rest, do not relax for a second,” the terrorist leader shouts in Arabic with Hebrew subtitles, over images of northern Israeli towns.

Earlier on Saturday, Lebanon’s National News Agency reported that a flare launched by Israel operating along the border had fallen in a UNIFIL base inside Lebanon, causing a fire to break out. There were no injuries.

The Lebanese news agency also reported that several explosions were heard along the border and that an additional fire had broken out the Israeli side of the border near Mount Dov. Responding to a query on the matter, the army said that the fire had been started by IDF activity in the area and that the blaze had been contained.

The army refused to comment on the nature of this activity.

On Friday, Kohavi toured the border a day after the army canceled leave for combat soldiers in the area, and the head of the IDF Northern Command warned Israel would offer a “harsh” response to any Hezbollah attack.

Adam Rasgon and Times of Israel staff contributed to this report.