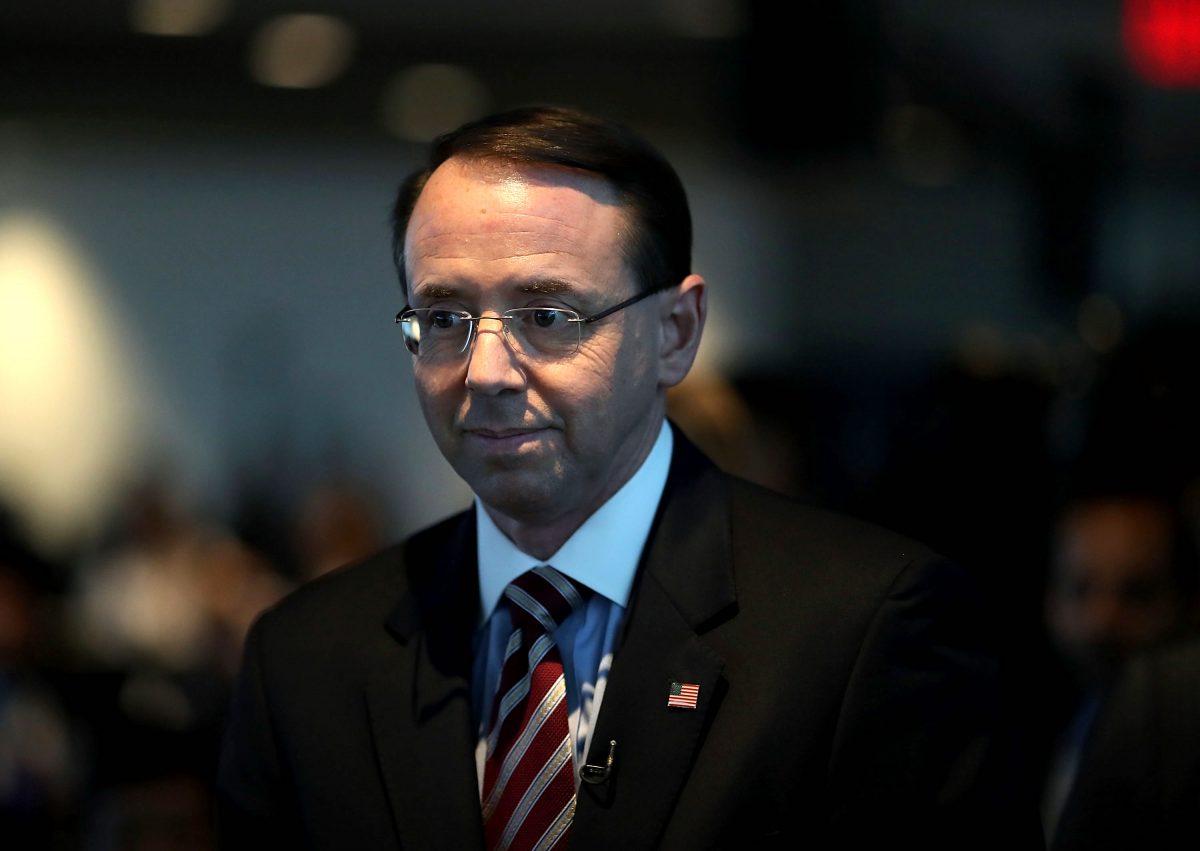 Newly released emails by the Department of Justice (DOJ) reveal details about the internal response by the agency to allegations that then-Deputy Attorney General Rod Rosenstein had wanted to wiretap President Donald Trump and invoke the 25th Amendment against him.

The allegations were first reported by The New York Times in September 2018. The article, headlined “Rod Rosenstein Suggested Secretly Recording Trump and Discussed 25th Amendment,” claimed that the “deputy attorney general, Rod J. Rosenstein, suggested last year that he secretly record President Trump in the White House to expose the chaos consuming the administration, and he discussed recruiting Cabinet members to invoke the 25th Amendment to remove Mr. Trump from office for being unfit.”

The New York Times article included a response statement from Rosenstein, who refuted the story, calling it “inaccurate and factually incorrect”:

“The New York Times’s story is inaccurate and factually incorrect … I will not further comment on a story based on anonymous sources who are obviously biased against the department and are advancing their own personal agenda. But let me be clear about this: Based on my personal dealings with the president, there is no basis to invoke the 25th Amendment.”

The New York Times article also noted that a Justice Department spokeswoman had provided the newspaper with a statement from a “person who was present when Mr. Rosenstein proposed wearing a wire” but did not directly quote the statement, noting only that the “person, who would not be named, acknowledged the remark but said Mr. Rosenstein made it sarcastically.”

The Times article claimed that “according to the others who described his comments, Mr. Rosenstein not only confirmed that he was serious about the idea but also followed up by suggesting that other F.B.I. officials who were interviewing to be the bureau’s director could also secretly record Mr. Trump.”

The series of internal emails released by the DOJ on Sept. 5 reveals the preparation of the response by the DOJ and Rosenstein to the pending story from The New York Times. Most of the emails are dated Sept. 20, 2018, and took place the evening prior to the publication of The New York Times article. There are significant redactions, but a number of important details are nevertheless contained within the release.

Included in the email chain are a number of DOJ officials, along with DOJ spokeswoman Sarah Isgur Flores. One of those included later in the email chain was Matthew Whitaker, then chief of staff to Attorney General Jeff Sessions. Whitaker would be named as acting attorney general just over two months later.

It appears that the first contact from the New York Times reporters with DOJ officials occurred on Sept. 20, 2018, at 3:47 p.m. via email. One of the reporters, Adam Goldman, told the DOJ that “Mike Schmidt and I are preparing a story on deputy attorney general Rod Rosenstein. We have learned the follow[ing] things below. We’d like a response later this afternoon. Please give a shout if you have any questions. Many thanks, Adam and Mike.”

The email included claims from McCabe that Rosenstein had suggested wearing a wire and that both Rosenstein and McCabe had discussed “using the 25th Amendment to remove President Trump.”

The request from Goldman set off a flurry of activity within the DOJ, and by 7:28 p.m. that evening, it appeared that a formal response had been crafted. Associate Attorney General Bradley Weisenheimer wrote to Flores and Edward O’Callaghan, the principal deputy assistant attorney general of the National Security Division, noting that Rosenstein was “good” with his statement. The email also noted that Rosenstein was “also good with a background statement from Scott in the manner you described.”

In an email sent later that evening, Flores wrote to Bill Shine, the former White House deputy chief of staff for communications, noting “we’ve sent a response from the DAG that’s below and had someone in the room dispute the “wire” part noting the DAG was being sarcastic.” The email also contained Rosenstein’s official statement.

The New York Times published the article the following day, on Sept. 21, 2018

As previously noted, the article made only brief mention of the background statement from “Scott,” who is almost certainly Associate Deputy Attorney General Scott Schools, who served as a top aide and adviser to Rosenstein:

“A Justice Department spokeswoman also provided a statement from a person who was present when Mr. Rosenstein proposed wearing a wire. The person, who would not be named, acknowledged the remark but said Mr. Rosenstein made it sarcastically.”

The story was then picked up by The Washington Post, which published its own article the same day. The Post article provided a bit more clarity on the comments made by Schools and provided some important additional details, including that McCabe was “pushing for the Justice Department to open an investigation into the president.”

“According to other attendees at the meeting, the mention of secretly recording Trump occurred in a different context from the one McCabe and [McCabe’s senior counsel, FBI lawyer Lisa] Page described. According to these people, McCabe was pushing for the Justice Department to open an investigation into the president.”

“During a conversation about how one would attempt to record any outlandish statements made by the president in private, Rosenstein responded with what one person described as a sarcastic comment along the lines of, ‘What do you want to do, Andy, wire the president?’

“That person insisted the statement was not meant seriously. At one point in the May 16 discussions, another senior Justice Department official remarked that it was crazy that they were engaged in such conversations at all.”

The context provided by the Post differed materially from the lack of details provided in The New York Times article from Goldman and Schmidt, and helped to more accurately frame the true sequence of events.

The Washington Post article also acknowledged that “A Justice Department official who met frequently with both McCabe and Rosenstein said that in the months that followed, Rosenstein never broached either subject — the 25th Amendment or a possible wiretap involving the president.” The article also pointed out that the claims from McCabe “come at a time when a grand jury has been hearing evidence in a case of possible criminal false statements by McCabe.”


The Sequence of Events

The meeting between Rosenstein, McCabe, and others took place on the morning of May 16, 2017. Rosenstein allegedly suggested to McCabe that he could secretly record Trump. It was at this meeting that McCabe was “pushing for the Justice Department to open an investigation into the president,” according to the witness accounts reported by The Washington Post.

In addition to McCabe, Rosenstein, and Page, there were one or two others present, including Schools, the senior-most career attorney at the DOJ and a top aide to Rosenstein.

According to comments contained in the Washington Post article, the conversation between McCabe and Rosenstein was framed in an entirely different light, noting that Rosenstein responded with sarcasm to McCabe’s suggestions, saying, “What do you want to do, Andy, wire the president?” This comment is presumably coming from Schools via the DOJ’s Sept. 20, 2018, response.

Sometime later the same day, both Rosenstein and Trump met with former FBI Director Robert Mueller in the Oval Office. Rosenstein would appoint Mueller as special counsel the following day, on May 17, 2017, and in doing so, Rosenstein removed control of the Trump-Russia investigation from McCabe and put it into Mueller’s hands.

This was confirmed by a Feb. 2019 statement by a DOJ spokesperson, who said, “The deputy attorney general in fact appointed special counsel Robert Mueller, and directed that Mr. McCabe be removed from any participation in that investigation.”

With the appointment of Mueller as special counsel, it also appeared that an attempt by the FBI under then-acting Director McCabe to re-engage with former British intelligence officer Christopher Steele, who authored the Clinton- and Democratic National Committee-funded dossier on Trump, abruptly ended.

McCabe was fired in March 2018 for lying to the DOJ inspector general and is currently the subject of a criminal grand jury investigation.

The emails show that a significant number of high-level DOJ officials were involved in reviewing the statement from Rosenstein, along with the background statement from Schools that refuted McCabe’s version of events. Additionally, the statements were provided to Sessions’s chief of staff—who would shortly after become the acting attorney general—and to White House officials.

The emails also appear to indicate that no one at the DOJ was disputing either Rosenstein’s statement or Schools’s version of events. Nor has anyone from within the DOJ disputed this presentation of events in the intervening period to date.

To the contrary, an official statement from the DOJ, in response to multiple television interviews conducted by McCabe in February 2019 provides strong support for both Rosenstein and Schools:

“The Deputy Attorney General in fact appointed Special Counsel Mueller, and directed that Mr. McCabe be removed from any participation in that investigation. Subsequent to his removal, DOJ’s Inspector General found that Mr. McCabe did not tell the truth to federal authorities on multiple occasions, leading to his termination from the FBI.”

McCabe recently accepted a position as a commentator with CNN. Meanwhile, the DOJ inspector general is expected to release a major report on FISA abuses and the FBI’s actions in this matter shortly, which may shine further light on the series of events.