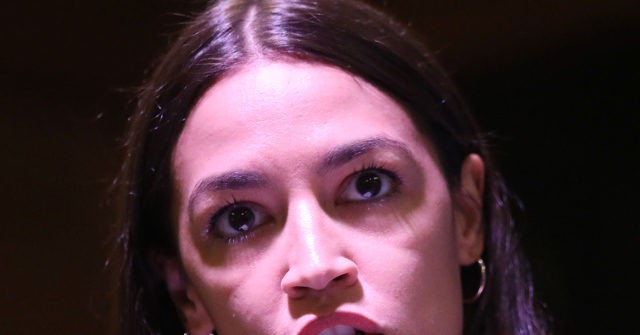 The extremist, antisemitic LaRouche PAC claimed responsibility for the “troll” at Rep. Alexandria Ocasio-Cortez’s (D-NY) town hall on Thursday, who said we must “eat the babies” in order to save the planet from climate change.

The bizarre moment unfolded at Ocasio-Cortez’s town hall at the Queens Public Library on Thursday after a woman stood up and proclaimed that we must “eat the babies” to save the planet from climate change, leaving the New York lawmaker dumbfounded.

“A Swedish professor [said] we can eat dead people, but that’s not fast enough. So I think your next campaign slogan has to be this: ‘We got to start eating babies! We don’t have enough time! There is too much CO2,” the woman said.

“I’m so happy that you really are supporting New Green Deal, but it’s not enough, you know. Even if we would bomb Russia, we still have too many people,” she continued.

“Too much pollution, so we have to get rid of the babies! That’s a big problem. We need to eat the babies!” she declared.

Ocasio-Cortez did not address the woman’s plea to “eat the babies” specifically, telling her that “we need to treat the climate crisis with the urgency that it does present.”

“Luckily we have more than a few months. We do need to hit net zero in several years,” the far-left “Squad” member said.

Upon the initial report, Breitbart News noted that it was unclear if the woman was a genuine supporter or someone spoofing the socialist lawmaker.

The extremist, antisemitic LaRouche PAC– the same group that was responsible for Obama-Hitler posters, which the Tea Party was wrongly blamed for – claimed responsibility for the woman’s bizarre performance.

Its founder, Lyndon LaRouche Jr. – who ran for president eight times between 1976 and 2004 (often as a Democrat) – touted a swath of bizarre conspiracy theories and created a cult-like following.

As the Times of Israel details:


His conspiracy theories included a claim that the International Monetary Fund was “engaged in mass murder” by spreading AIDS through its economic policies, that former secretary of state Henry Kissinger and former vice president Walter Mondale were Soviet “agents of influence” and that the Queen of England was involved in the drug trade. He said former Philippines president Ferdinand Marcos “was opposed to me and he fell as a result.”

LaRouche called for a quarantine of AIDS victims and said most medical warnings about how the disease was spread were lies. He also referred to Zionism as “cult nonsense” and said the Holocaust was “mythical.”

The Anti-Defamation League of B’nai B’rith once characterized LaRouche’s organization as an anti-Semitic political cult.

While some members of the group have expressed support for President Trump – citing his “favorable economic policies” – many mainstream outlets are describing to the extremist cult-like group as simply a “pro-Trump group.”

“Turns out the woman yelling was a Trump supporter,” Ocasio-Cortez wrote. “Doesn’t rule out potential mental issue (Drs do that) but good to know they were not in crisis”:

Turns out the woman yelling was a Trump supporter 🏽‍♀️

Doesn’t rule out potential mental issue (Drs do that) but good to know they were not in crisis.

Earlier this year I was stalked & very nearly hurt by a disturbed person. I don’t take chances & immediately try to de-escalate. https://t.co/kgWFvigJhy

Ocasio-Cortez initially came under fire for failing to address the woman’s call to “eat the babies”– even before discovering that it she was part of a controversial extremist group.

She took to Twitter after the video surfaced and expressed the need to “ensure we treat the situation compassionately.” She also used the incident to plug Medicare for All:

This person may have been suffering from a mental condition and it’s not okay that the right-wing is mocking her and potentially make her condition or crisis worse. Be a decent human being and knock it off.

« Trump-Ukraine Narrative Continues to Collapse: Dems’ Leaked ‘Smoking Gun’ Text Message From US Official Goes Up in FlamesDemocrats Had Meeting To Discuss How To Kidnap Trump Officials, Where To Jail Them »