Salesforce CEO: "I Strongly Believe That Capitalism As We Know It Is Dead" 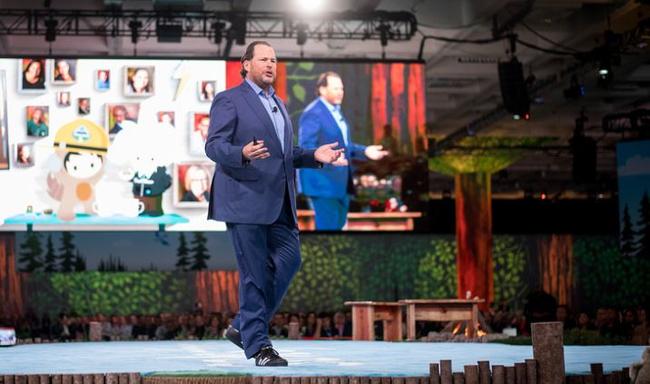 During a 'fireside chat' in front of a packed audience at TechCrunch Disrupt San Francisco, Salesforce founder and Time Magazine owner Marc Benioff shared his thoughts on a range of issues, including the important role public markets play in "cleansing" companies of "all of the bad stuff that they have" (for those who followed the WeWork imbroglio, this ought to make sense), and, more broadly, the future of American capitalism.

The TechCrunch event, which, after being immortalized by the Show "Silicon Valley", has become an annual must-attend summit for all of the power players and wannabes in the Bay Area tech scene, typically hosts big-name speakers. And Benioff was no exception. Speakers are encouraged to be candid, and the Salesforce impresario didn't hold back, it appears.

Speaking about the importance of public markets, Benioff said the "great reckoning" that public markets provide is a critical step for young companies.

"What public markets do is indeed the great reckoning. But it cleanses [a] company of all of the bad stuff that they have."

Benioff cited WeWork and Uber as examples of companies that could have benefited from an earlier public offering.


"I can’t believe this is the way they were running internally in all of these cases," Benioff said. "They are staying private way too long."

Benioff added that "trust" is the most important value for an entrepreneur.


"If the highest value [you anchor your company around] isn’t trust, then every key stakeholder - your employees, your customers and your investors - will walk out," Benioff said.

Soon, Benioff moved on to an even weightier subject: The destiny of American capitalism. To which Benioff insisted that capitalism in the US is "under siege", and that corporate stakeholders are beginning to wake up and realize that corporations should be responsible for more than simply generating profits for their shareholders.

Bridgewater Associates founder Ray Dalio, one of the wealthiest men in the country, has made similar remarks in the past. But in a LinkedIn post published this week, Dalio warned that the dynamics driving markets today are similar to what drove markets during the last great downturn in the 1930s - a theory that Dalio hasn't shied away from sharing over the past couple of years.

Watch a clip from Benioff's talk below: