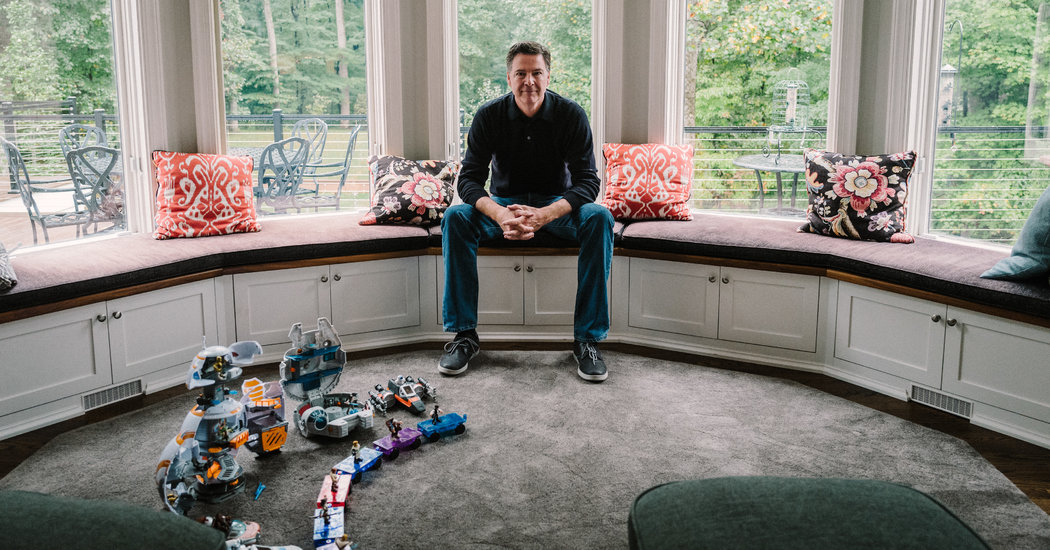 James Comey slumps strategically in restaurants — all 6-foot-8 of him, drooping faux-furtively with his back to the room — and daydreams about deleting the civic-minded Twitter feed where a bipartisan coalition pronounces him a national disgrace.

He sleeps soundly — nine hours a night, he ballparks — and organizes the self-described “unemployed celebrity” chapter of his life around a series of workaday goals. “One of my goals has been to get to 10 consecutive pull-ups,” Mr. Comey said in an interview, legs crossed on the back porch of his stately Virginia home. “I’m at nine now. So, I’ve been doing a lot of pull-ups.”

He writes and thinks and reads and worries from a tidy downstairs office surrounded by the trinkets of his past: the White House place card from the night President Trump asked for his “loyalty” as F.B.I. director; a book by Nate Silver, the political data whiz who believes Mr. Comey’s explosively ambiguous letter in October 2016 about the Hillary Clinton email investigation probably handed Mr. Trump the election; a page from a quote-of-the-day calendar, saved for its resonance: “Never attribute to malice that which is adequately explained by stupidity.”

But then, a lot of things have lately. Another Trump-branded election interference scandal is upon us. Institutions are wobbling. And Mr. Comey, as ever, cannot fight a nagging conviction about it all: James Comey can help. He must help.

“I feel stuck,” he said. “Like I can’t do something else. And I couldn’t look myself in the mirror if I went and did something easy.”

What he is doing, exactly, is not entirely clear even to him. Rather than proceed with the standard arc of an erstwhile intelligence leader — think tanks, corporate boards, studied political silence — Mr. Comey has pledged to spend the next 13 months working to drive Mr. Trump from power.

The former F.B.I. director, a lover of order, sees little of it in a norm-smashing president spiraling toward impeachment, riffing on “sick and deranged” Democrats at a recent rally and playacting the dialogue of F.B.I. officials like an insult comic. In this concern, Mr. Comey has ample company. In this company, he carries a kind of customized psychic baggage.

Who can know how it feels to wonder, to have everyone you meet wonder, if the president is standing behind that seal because of you?

“Thanks for giving us Donald Trump,” an older woman heckled recently, adding an expletive as Mr. Comey strolled through a Yale Law School building, where he had come for a talk that focused largely on his fateful 2016 decisions and attendant personal anguish.

“Thank you for the feedback,” he told her.

Divorced from its singular context, Mr. Comey’s condition is somewhat typical of the wandering urgency with which many presidential critics are approaching the 2020 election. Last year’s season of midterm activism has given way to a long electoral winter of Democratic primary skirmishes and an emphasis on just a few early-voting states, leaving Trump opponents to wrestle with how to contribute amid a gush of executive outrages they feel powerless to counteract.

Lawmakers can impeach. Whistle-blowers whistle-blow. What of the private citizen, determined to live publicly?

“It’s hard for people who’ve had a lot of power to come to terms with the fact that there’s actually very little you can do when you’re not a candidate,” said Jennifer Palmieri, a former top aide to Mrs. Clinton. “Or the F.B.I. director.”

While short on formal authority, Mr. Comey has suffered no deficiency of platforms. He says he has signed a contract to write opinion pieces for The Washington Post. He is the subject of an upcoming mini-series, starring Jeff Daniels as Mr. Comey, based on his best-selling memoir. He travels the country giving speeches on ethical leadership, mixing pro bono appearances on college campuses with paid bookings that command a six-figure fee. (“It’s a lot!” Mr. Comey enthused, while declining to name his precise rate. “Seriously, it’s crazy.”)

Over nearly two hours last month at his Northern Virginia home, whose coordinates he prefers not to publicize given the president’s affection for lathering up supporters with tales of “Leakin’ Lyin’ James Comey,” the former F.B.I. director could register as a spindly contradiction. He is at once a just-the-facts lawman and a prodigious feeler of feelings, introspective about the size of his ego and incapable of suppressing it entirely.

He says he is “not that important in the great sweep of American history” but believes his firsthand view into the president’s psyche can offer uncommon value to the anti-Trump movement. He can hold forth in one breath on the humbling task of bird-feeder maintenance and in another invoke the teachings of the theologian Reinhold Niebuhr. He says “dude” a lot.

At times, Mr. Comey can sound as if he is suggesting that the Twitter account from which he slings grave warnings and measured hope (“This country is so much better than this president”) is yoked to the health of the nation.

Closure has eluded some of his audiences, too. They lard Mr. Comey’s public events with skeptical questions about his choices in 2016. The Justice Department’s inspector general has lashed Mr. Comey for “insubordinate” conduct during that period, accusing him of breaking with longstanding policy by publicly discussing an investigation into Mrs. Clinton’s use of a private email server, including in a letter to Congress less than two weeks before the election.

Mr. Comey has conceded that he may have allowed himself to be influenced subconsciously by the political consensus that Mrs. Clinton would win. But he has betrayed no major regrets, defending his chosen course as the best among bad options. “I wish like hell we hadn’t been involved,” he said. He predicted that history would judge him kindly for prizing disclosure over concealment (not, as some Clinton allies see it, opting for spectacle over discretion).

Asked if he cared about how he would be remembered for the ages, Mr. Comey, 58, said, “I was going to say I don’t care. I’m sure I care a little,” adding, “It frustrates me in general that millions of people have a false impression of me. I wish they knew I was funnier.”

Asked if helping to defeat Mr. Trump would provide a measure of catharsis given his role in 2016, Mr. Comey paused. “Hmm,” he said. “I don’t think so. At least in my own conscious mind, I don’t connect those things.”

There is little template for a modern F.B.I. chief pursuing a prominent perch in political advocacy. Mr. Comey has performatively bristled at the observation that he is the bureau’s most consequential leader since its first, affecting a grimace recently when a forum moderator introduced him as “the first F.B.I. director since J. Edgar Hoover to be a household name.”

“There’s no precedent,” Tim Weiner, author of “Enemies: A History of the F.B.I.,” said of Mr. Comey’s present ambitions. “But then, there’s never been a president who’s been perceived as a threat to American national security.”

A former registered Republican who planned to complete his 10-year F.B.I. term in 2023, Mr. Comey has urged Democrats against charging to “the socialist left.” He is open to appearing with presidential candidates at campaign functions or even at a nominating convention, if they will have him, though he vowed never to seek office himself.

Mr. Comey donated money earlier this year to Senator Amy Klobuchar of Minnesota, a former law school classmate, but in the interview volunteered few opinions on the rest of the 2020 Democratic field, save for a compliment about the thoughtfulness of the South Bend, Ind., mayor whose name he seemed unsure of (“Is it Pete Boot-ed-edge?”).

Some veterans of law enforcement have questioned the value, and the propriety, of Mr. Comey’s new phase, mocking the emotive turn that has found him posting images of nature and open road on social media.

Rod J. Rosenstein, the former deputy attorney general whose 2017 memo about Mr. Comey was cited to rationalize the firing of the F.B.I. director that May, has been particularly cutting. At a speech last spring, Mr. Rosenstein taunted the former director for “selling books and earning speaking fees while speculating about the strength of my character and the fate of my immortal soul.”

“I kid you not,” Mr. Rosenstein said. “And that is disappointing. Speculating about souls is not a job for police and prosecutors.”

Those who know Mr. Comey concede that he is often the hero of his own anecdotes, and it is in these moments that he can most resemble a politician.

While his crowds are self-selecting, Mr. Comey has plainly retained a constituency, dispensing hugs and autographs and frozen selfie smiles wherever he goes.

Charles Grady, a community outreach specialist at the F.B.I.’s New Haven office who came to see Mr. Comey speak at Yale, wrapped him in a bearhug afterward, saying Mr. Comey was the man who first recruited him. “I joined the F.B.I. because of him,” Mr. Grady said. “And I stay because of the work he started.”

The next evening, hours after encountering the heckler at the law school, Mr. Comey was briefly exultant when a young woman on the street praised his subsequent conversation with student Democrats.

“At least three of those for every ‘douchebag,’” he estimated as he walked away.

In the interview at his home, Mr. Comey imagined it was “darkly funny” to Mrs. Clinton that he had been recast as “the leader of a cabal” to destroy the president after testifying in Congress against Mr. Trump’s conduct and character — and less funny to Mr. Comey’s wife, Patrice, who had been a devoted Clinton supporter herself.

“We’re very protective of him,” Ms. Comey said. “It’s not O.K. the way the Republicans and the president and politicians in Congress — I mean, it’s just not O.K.”

Mr. Comey has found comfort in a longer view. In speeches and writings, he can appear almost preternaturally convinced of his capacity to sort right from wrong, and to be recognized for having done so eventually.

His public career — in self-idealization and, often enough, in reality — has been an exercise in telling powerful people what they did not wish to hear, in accordance with Mr. Comey’s own professional compass. As deputy attorney general under George W. Bush, he famously confronted presidential aides over a surveillance program he found legally dubious.

On the road, Mr. Comey speaks often of being left to “take the hit” in service of the institutions he reveres, saying he knew full well that his actions in 2016 would be “disastrous for me as a human being.”

There is a story he likes to tell audiences about his grandfather, William Comey, a former leader of the Yonkers Police Department whose picture hangs in Mr. Comey’s private work space. During Prohibition, the elder Mr. Comey caught wind of a bootlegging scheme to funnel beer through fire hoses between Yonkers and the Bronx.

He loved beer. He knew that didn’t matter. His order came swiftly: Ax the hoses, and let the alcohol fill the sewers.

“It made a lot of people angry,” Mr. Comey told students recently. But did that make it wrong?

“Pop did the right thing,” Mr. Comey instructed them.

And then once more, a little firmer: “He did the right thing.”

via The New York Times https://ift.tt/2pc3LZw