Why are these L.A. people sleeping in stacked pods? It’s not just the cost of housing 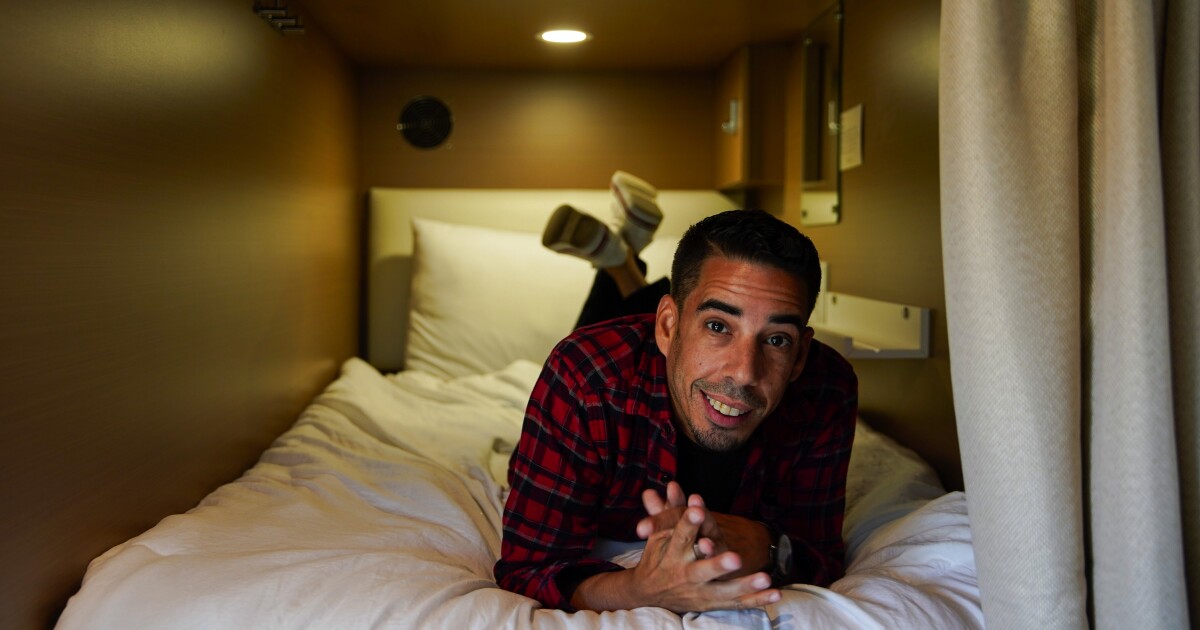 The other evening, I visited Eddy, a new co-living complex in Hollywood. Tucked away on a residential block that used to be all bungalows, it has the styling of a hip boutique hotel. People carry branded metal water bottles that say “Live. Dream. Connect.” The gym has a Peloton bike. Butterfly chairs encircle the backyard fire pit. In the co-working space, from a vending machine, you can grab a grain bowl or overnight oats.

Each of Eddy’s four-bedroom furnished apartments has a gleaming kitchen with a big island and professional-grade stainless steel appliances. In the spacious living room, the custom-made sectional is deep, perfect for sinking into for a movie on the large flat-screen TV. For rents that top out per person at $945 a month, the luxe of it all seems astounding.

But here’s the catch: Each single-sex unit is designed to accommodate 18 men or 18 women. Each diminutive bedroom with its private bathroom: four to six adults in small, stacked rectangular spaces called “pods” just wide enough for a mattress and high enough to sit but not stand on top of it.

They reminded me of the sleeping berths you might find in a luxury railway car or a rock band’s touring bus.

I crawled into one to get a feel.

At my feet was a privacy curtain. And while, from the sheets to wall safe to mattress to noise-muffling ceiling fan, the space was comfy and well-outfitted, I felt the snugness of it and the nearness of the walls and I quickly had to crawl out.

Still, I’ll be the first to admit that I don’t fit this type of housing’s prime demographic — single people in their 20s and 30s, relatively early on in their working lives.

Space-maximizing pod housing makes up a tiny part of the city’s overall housing mix, but it quietly is popping up in neighborhoods all around Los Angeles right now. It may well have moved in somewhere near you so discreetly that you don’t even know.

In the middle of an affordable housing crisis, it’s easy enough to understand why what was once aimed mostly at short stays — tourists, new transplants — is now also being taken up as a long-term housing option.

But headlines tend to emphasize space versus cost — sometimes more than $1,000 for glorified bunk beds. And if you stop right there and roll your eyes and say, “For that price why not rent a private room with a door?,” I think you might miss some of what is driving this kind of communal living.

How we live in our world is changing fast. And given our shortage of affordable housing in the city, given the thousands of people who don’t have any housing at all, I think it behooves us to see what a variety of housing models might offer.

That’s why I set out recently to seek out those who were choosing to settle into the pod route. I wanted them to tell me why. In a lot of cases, the decision to go pod wasn’t strictly about price.

The people I met at Eddy included actors and a sculptor and people making films. And they seemed to care far more about the chance to be part of a creative community whose members could hang out together in a groovy setting than about where they lay their heads during the relatively brief periods when they slept.

Mike Baez, 38, is an actor and filmmaker who drives for Uber to get by. In traditional rentals, he said, you have to put so much deposit money down, and landlords often frown on what he can produce for his proof of income. Eddy didn’t, and its security deposit was just $395. He moved a month ago into the complex, which charges $795 a month if you commit to six, $100 more if you go month to month, $50 more for the slight space upgrade from a twin- to a full-size mattress.

For those sums, Baez and his fellow residents get linens and towels and daily housekeeping. They get shampoo and conditioner and shower gel in the bathrooms. They get a furnished place, complete with pots, pans and plates. They get high-speed broadband and cable, loaded iMacs in the workspace, a communal screening room, free fitness classes, group outings and on-site activities.

More important for Baez (twin, month-to-month), they get company.

“I had roommates up until then,” he said of moving to Eddy, “but ultimately it always felt pretty lonely. I like the idea of just having people around, coming home and finding like-minded people to talk to.”

I’ve talked before about urban isolation and loneliness. It’s something I worry about. So many people now work jobs that might not involve co-workers. In the course of the day, if they don’t work at it, they might not have a single conversation.

The day after visiting Eddy, as I toured the properties of the older and earthier PodShare chain, I kept hearing similar sentiments about the comforts of not being all alone.

In downtown L.A., I met Daen Weary, 26, a Union Station security guard who wants to be an actress and told me she likes hanging out with the European tourists who pass through her PodShare location. Weary served on ships in the Navy and said that makes her pod feel spacious to her.

In Venice, I met Lorraine Soriano, 36, who inspects locomotives for Amtrak. She told me she is still deciding where in the area she wants to live. But she grew up with six people in a two-bedroom apartment in East L.A., and while she has the money for her own place, “I do not like being alone. I get all weirded out. I’m scared of it.”

Pod complexes exist in many forms in L.A. Some are themed — say for people in the music industry. Some are illegal — just a bunch of metal bunks crammed into bedrooms of homes and apartments. (I’ve seen pictures on Craigslist that are so grim, they make me shudder.) The well-run versions like Eddy and PodShare work with the city creatively to meet zoning and safety codes. There’s also a more pricey evolution of the form that features tiny private rooms rather than pods.

PodShare makes the Eddy seem like a palace of privacy. Its pods are built-in, grown-up versions of wooden bunk beds, with stairs instead of ladders to get to the upper bunks, and TVs mounted on the walls of each sleeping space. But they’re generally all located in one big co-ed room, in plain sight of each other, without even curtains to shield them from view.

Group policing is essential to the communal model. PodShare and Eddy both have on-site staff to help, but groups tend to enforce standards and keep those who stray on track.

On my PodShare tour, though, quite a few people never looked up even as I gazed at them. Many pod dwellers grew up with earbuds in their ears. They’re used to using them to create zones of privacy where physically there isn’t any.

They’re also often used to moving around a lot for work and to traveling relatively light.

In the Hollywood PodShare, I met Stephen T. Johnson, a 27-year-old entrepreneur who splits his time between PodShares and his parents’ house in San Antonio, Texas — and travels with just 11 items (clothes included) because that’s how little he cares right now about having stuff or having a place to put stuff.

PodShare spaces, by the way, remind me of minimalist Broadway sets made from scaffolding. (Think “Rent.”)

Some have the feel of old cabins with history. The bunks are of Home Depot lumber, the walls often decorated with patterns made out of scraps from pallets and blackboard paint covered with chalk doodles and messages. Shelves are stuffed with surprisingly erudite left-behind reading material.

Elvina Beck, 34, who launched the company seven years ago, is zealous about encouraging what she calls “collisions,” in which people have to interact. For her, it’s not just theoretical. She stays in the pods most nights, hopping around to the various locations — which also include Hollywood, Los Feliz and Venice (with San Francisco recently added to the mix). She talks fast, moves faster and rarely stops moving to rest.

PodShare pods generally cost $50 a night, $280 a week, $1,000 a month. There’s no security deposit and once you pay to stay, you can hop around to different locations, all of which are in high-priced parts of town. It can make living on a shoestring in L.A. feel a little luxurious.

Beck says in recent years her business, which was once 80% short-term, is now growing more evenly split between those who breeze in and out and those who stay for some time. Her population, she says, is a healthy mix of “the haves and the have-nots.”

In downtown L.A., I met Courtney Manlove, 32, who told me she was a little of both. She runs her own sales and marketing company focused on the music business. She told me she used to own a Mercedes. But she sold it and most everything else of high value she owned after she was diagnosed with colon cancer and her chemotherapy wasn’t covered by her insurance. She’s now cancer free, but she ended up more than $200,000 in debt, which, of course, ruined her credit.

“I make six figures but I can’t get approved for an apartment,” she said. “That’s why Los Angeles is becoming the No. 1 homeless capital in the world — because everyone makes it so hard.”

In Westwood, I met Susan Sherwin, 69, whose Malibu house burned down in 2007. She told me she spent years in a messy divorce fight that kept her from selling the property. She was living in her RV in a mobile-home park until she found PodShare, near the Jules Stein Eye Institute, where she is waiting for her cataract eye surgery. Without it, she said, she’d never be able to stay in that part of town.

In the course of my PodShare visits, I met others who found themselves in positions so precarious that the flexible pod model — whatever its limitations — felt like a godsend to them.

That made me think about all those people we hear about who suddenly hit a bump in the road and find themselves living in their cars or on the street. Could some version of this model work for them? Could some modified form of it also work as a transition for the homeless people we often hear about who get housing and then struggle in apartments alone because they’re so used to always being around others?

Beck has been contemplating these ideas perhaps to house homeless women. She’s also been asked if the model might work for homeless veterans, who already have experience with close quarters.

Pod living clearly isn’t for everyone. But on so many fronts, we’re in need of solutions. We have so much need. Could something in this simple, flexible model provide at least a temporary fix for some of it?