“Friends (and foes), there are objective ways to measure the public’s interest in a subject like impeachment,” tweeted Cernovich. “You can see interest peaked (not to be confused with piqued) in December. Interest fell off a cliff, and here we are.”

I don't really care about the impeachment, do you?

Friends (and foes), there are objective ways to measure the public's interest in a subject like impeachment.

You can see interest peaked (not to be confused with piqued) in December.

Interest fell off a cliff, and here we are. 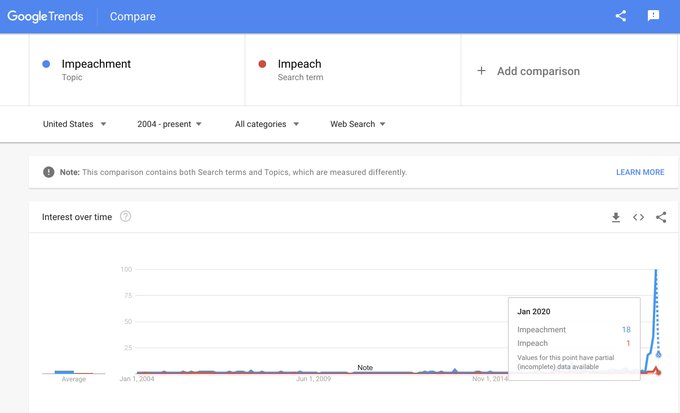 40 people are talking about this

Another graph shows that interest in impeachment was actually higher back in September last year than it is now.

Despite much hyperventilating by the media, the start of Trump’s Senate impeachment trial was watched by around 11 million viewers across 10 broadcast and cable television networks.

That’s down on the 13.8 million viewers who tuned in last November for the first day of the Congressional impeachment inquiry.

Perhaps most Americans understand that with virtually zero chance of Trump being impeached by the Senate, the whole charade is merely a show trial to try to keep a cloud over the president going into the 2020 campaign.

My voice is being silenced by free speech-hating Silicon Valley behemoths who want me disappeared forever. It is CRUCIAL that you support me.

Many people are becoming aware the Senate impeachment trial is an exercise in politics, nothing more.  The votes are already decided; the trial is simply a pantomime.

To highlight the point, Democrat Senator Dianne Feinstein, the ranking member of the Senate Judiciary Committee, simply walked out during the trial when Adam Schiff was testifying; said “goodnight” and just went home.

(WaPo) Sen. Dianne Feinstein (D-Calif.) walked out of the Senate chamber, said “good night” to two reporters standing nearby, and left the Capitol. Senators are expected to stay in the chamber for the entirety of the arguments. (link)

via The Last Refuge https://ift.tt/30KgeCm