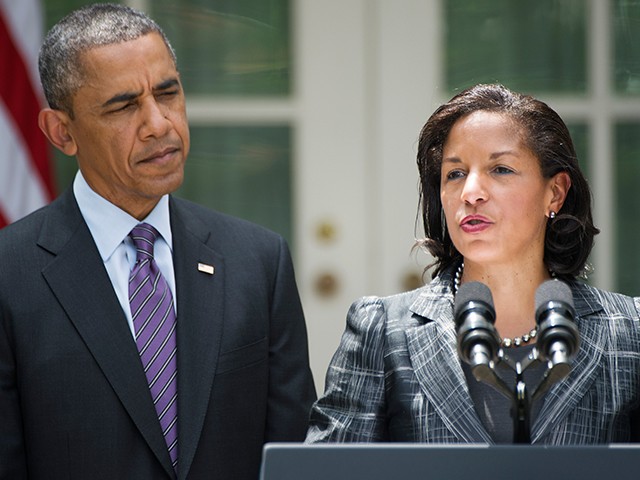 It was revealed Monday that President Obama’s national security adviser Susan Rice allegedly ordered the unmasking of the identities of Trump campaign aides who were reportedly being surveilled during the 2016 election.

The recent reports further prove, at least in part, President Donald Trump’s claims that senior Obama officials had collected intelligence on Trump aids and disseminated it throughout the government. Rice’s involvement — as it relates to her reported role in the unmasking of Trump aids and circulating sensitive information — places the longtime Obama operative at the center of another major political scandal.

Below are five facts from Susan Rice scandals every American should know.

Rice allegedly maintained spreadsheets of Trump aides’ telephone calls “one year before the 2016 presidential election,” according to the Daily Caller.


“What was produced by the intelligence community at the request of Ms. Rice were detailed spreadsheets of intercepted phone calls with unmasked Trump associates in perfectly legal conversations with individuals,” diGenova told The Daily Caller News Foundation Investigative Group Monday.

“The overheard conversations involved no illegal activity by anybody of the Trump associates, or anyone they were speaking with,” diGenova said. “In short, the only apparent illegal activity was the unmasking of the people in the calls.”

2. Rice claimed that climate change was responsible for the deadly civil war in Syria.

“In the years prior to civil war breaking out in Syria, that country also experienced its worst drought on record,” Rice said in October 2015, during a speech at Stanford University. “Farming families moved en masse into urban centers, increasing political unrest and further priming the country for conflict.”

Hundreds of thousands of Syrians have been killed in the conflict since President Barack Obama drew his infamous “red line” in 2012, promising to retaliate against Syrian President Bashar al-Assad’s regime if it used chemical weapons on its own people.

3. Rice once declared that there is “no military solution” to the raging conflict in Yemen.

“As in Syria, there is no military solution to the crisis in Yemen,” Rice said in April 2015, during a speech at the Arab American Institute’s Kahlil Gibran Gala.

President Trump, however, ordered more airstrikes against al-Qaeda in Yemen in February than any year in Obama’s presidency.

In March 2015, Sgt. Bowe Bergdahl was charged with treason for allegedly deserting his fellow soldiers and abandoning his Afghanistan outpost in 2009.

In a June 2014 broadcast of ABC’s This Week, Susan Rice defended Bergdahl, saying he “served the United States with honor and distinction. And we’ll have the opportunity eventually to learn what has transpired in the past years.”

5. Susan Rice was the driving force behind a misinformation campaign about the Sept. 11, 2012, Benghazi terror attacks.

Then-UN Ambassador Rice, acting as the Obama White House’s spokeswoman, appeared on five Sunday morning talk shows and repeatedly claimed that the Benghazi attacks had been caused by an anti-Islam video.

Rice appeared on ABC, CBS, NBC, Fox News, and CNN and regurgitated talking points purporting that the protests that had erupted “spontaneously” near two U.S. government facilities in Benghazi, Libya and were a result of a “hateful video” that was offensive to Islam.

But government documents, released following a Judicial Watch lawsuit, reveal that government officials monitoring the attack in real-time did not cite an anti-Islam video as an explanation for the paramilitary attack on the U.S. diplomatic mission in Benghazi.

“I think the line in there that says one of our objectives here right on the Sunday show is to blame the video rather than a failure of policy,” Morell said on Fox News’ Special Report. “And as you know, I say in the book that I think that that is crossing the line between national security and politics.”