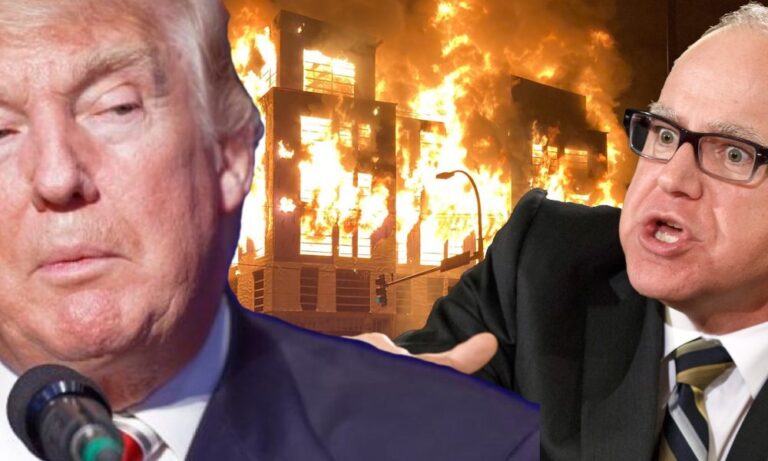 After standing back and watching many thousands of his constituents engage in wanton property damage, looting, wholesale arson, intimidation and physical assault, Minnesota Governor Tim Walz (D) is now asking for law-abiding taxpayers to pay for this hissy fit.

(Fox News) Minnesota Gov. Tim Walz has asked President Trump for a federal disaster declaration in his state due to “extensive fire damage” and other destruction in the unrest that followed George Floyd’s death in Minneapolis police custody on Memorial Day.

“We need to come together to ensure Minnesotans who were victims of this destruction have access to critical infrastructure they need so they can go to the grocery store, pick up their medication, and live their lives,” Walz said in a statement Thursday. “Together, we will rebuild.”

Here’s Walz’s official statement as it appears on the governor’s website:

“We’re asking our federal partners to step up and help our communities recover.

After six weeks of being told to shut up because we don’t understand, it’s hubris of the highest order to now call us partners with expectations that we’ll ante up to repair the damage caused by race-baiting Democrats.

Governor Walz sat idly by while members of his party and their allied media partners literally poured rhetorical gas on the fires for political gain.

He allowed the mayor of his principal metropolitan area to neuter the police and fire department’s response to address what became out of control political theater.

Now, after six weeks of engaging in the most divisive political effort in nearly half a century, Walz has the temerity to turn around and say to hard working U.S. taxpayers, “We need to come together to ensure Minnesotans who were victims of this destruction have access to critical infrastructure.”

The damage to critical infrastructure wasn’t the result of a natural disaster.  It was part of an orchestrated political effort by the entirety of the Democratic Party to jumpstart the moribund Biden candidacy that had been left for dead.

Minnesotans voted for this mess.  Now it should be up to them to pay to remedy it.

As a result of this unholy contrivance, Black Lives Matter raised $500 million that has been funneled directly to the Democratic Party and the Biden campaign, through ActBlue.

Common sense tells us the destructive parties should not be allowed to benefit from their crimes.  Let Walz sue his own party for the money to set things right.