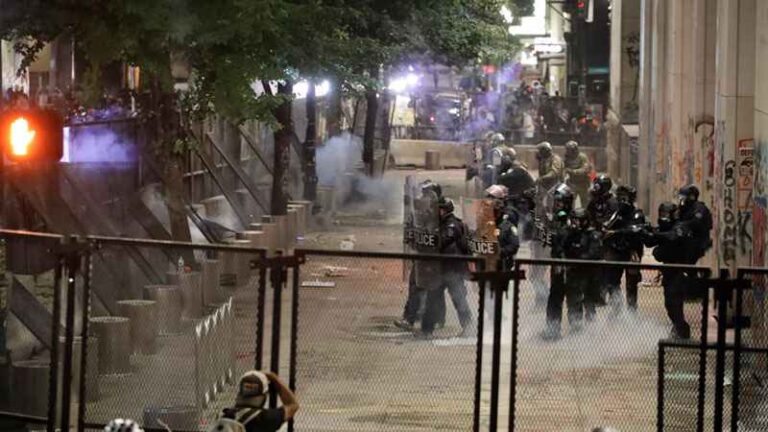 AP reporter Mike Balsamo has discovered for himself that Jerry Nadler is just another Democratic liar when he declares that the accusation of violence in Portland is not a myth.

Balsamo spent real time on the ground in Portland and also hunkered down inside the Mark Hatfield building that houses the federal court in Portland that has been under constant attack for the past week to week and a half.

Nadler had told a journalist on Sunday that the stories about violence in Portland were nothing more than a myth floating around Washington, DC.

It’s amazing that he can’t see the violence played out every day in videos of the riots in Portland yet was able to see grounds for impeachment, where none existed.

The riots in Portland have now been going on for 61 consecutive days with no end in sight. The city and it’s alleged mayor Ted Wheeler who has marched with the rioters are now blaming President Trump and federal agents for the violence but they have only been in Portland for about 10 days. That does not explain 61 days of rioting.

Balsamo recently spent a night holed up in the Mark O, Hatfield building with the federal agents as 4,000 rioters lurked outside trying to find a way to barricade the agents inside , so they could then set the building on fire. ‘

He described the experience as horrifying.

“In the no-mans-land outside stood the fence: A thick, black iron installation, erected six days before, a dividing line between protester and protector, a stark separation between two radically different world views.”

“The terrace outside the front door was littered with garbage, the steps leading to the courthouse splattered with paint. A mixture of anti-police and Black Lives Matter graffiti covered the building’s outer walls and columns to a height of about 10 feet.”

One unnamed federal agent told Balsamo that he is terrified every time he has to go outside the building. he said that he fears for his life every single time. That never happens in a myth. Maybe Nadler should travel to Portland and spend a night roaming the streets where the rioting is taking place.

“You open those doors out, when the crowd is shaking the fence, and … on the other side of that fence are people that want to kill you because of the job we chose to do and what we represent. I can’t walk outside without being in fear for my life. I am worried for my life, every time I walk outside of the building.”