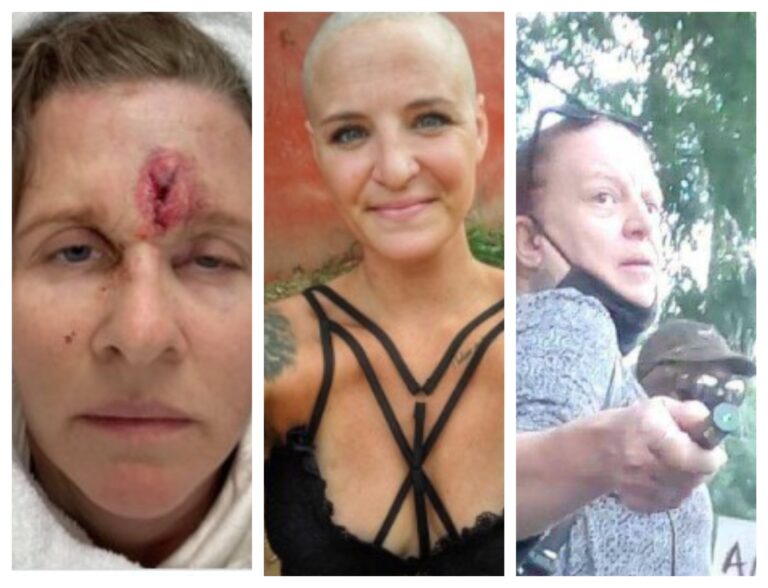 Americans are beginning to notice that many of the most violent, most dedicated people for the unraveling of the United States by a Marxist movement meant to empower Black People are far-left radical left White Women, and some of them are allowing themselves to be gravely injured or commit heinous crimes to promote their obsession with Black Lives Matter and defunding local police departments.

The name “Party of Riots and Ruin” has at least three women who have destroyed their lives for their love of riots, one with a lengthy criminal record, one who was hit by a motorist along with another woman who was killed, and one who neglects her children to attend riots, where she was shot in the face.

All three women rush to return to rioting, even after experiencing major setbacks in their lives, they are so dedicated to rioting and being violent to the police. Something that seems to unite them is that each of their stories exposes the fact that many of these White Women don’t actually know many if any,  Black Americans at all- they may be in the fight for BLM because they like the power of fighting.

“I was inspired to use not only my voice but also my body, to defend our First Amendment right to protest and send a clear message that Black lives are worth fighting for,” wrote Kristen Jessie Uyanik in a Facebook post, after being shot in the head with a Rubber bullet during a riot. She plans to return to riots.

“Seattle, I’ve got news for you! The protests never ended! YOU may have stopped showing up but we are still out here fighting for our black and brown allies! Please join us in OUR STREETS, we need all the support we can get!” said Diaz Love lying in a hospital bed paralyzed after being hit by a car while blocking a freeway in Seattle. “If you can’t put your body next to a Black or brown person on the streets, then don’t you dare think about being an ally,” Love said.

Caryn Sadaro was arrested again after numerous mental health breakdowns and arrests, only to be arrested again in Denver earlier in July. She has an activist lifestyle.

WHAT IS UP WITH THE WHITE LIBERAL WOMEN?

Bryson Gray is an activist who was at a rally in North Carolina on Sunday and commented about the number of White Women, who attended a BLM counterprotest to a Pro- Police rally:

I was at a back the blue rally and we had a clash with a huge group of BLM. Most were white liberals with colors in their hair and the other were gay black dudes and women with ugly weaves.

Just because violent policing happens mostly to other people doesn’t mean it won’t eventually happen to you. It’s a lesson many are learning during this American policing crisis. #GeorgeFloyd #BreonnaTalyor #ForJustPolicing #BlackLivesMatter https://t.co/ZLFLjjjLLR

A viral video of young White Women attacking the police in New York:

Consequences will never be the same. pic.twitter.com/sYjfozGTi0

TALE OF THREE WHITE RADICAL LIBERAL WOMEN AND THEIR DAMAGE

According to her Facebook page, Uyanik is a 41 year old Mom of three with “old white woman with immense privilege”. Uyanik wrote about her experience at a riot, saying:

“I put my phone back in my pocket, pulled my safety goggles down from where they sat on my helmet to cover my eyes, inserted a pair of earplugs, and locked arms with the women next to me. I remember some confetti had been launched on the far right side of us. I could hear a marching band playing in the intersection to our left. I didn’t notice anything in particular happening around me or in front of me in those moments. I was looking around, looking forward, and taking it in,” she wrote.

“At the hospital, my CAT scan showed no brain damage or skull injury, but it did reveal a “foreign substance” all over my forehead and even in one of my eyes. The doctors couldn’t see it, but they pointed out the appearance of tiny fragments that had pierced my skin, like gravel but there was no gravel to recover. I received 7 stitches, some pain medication, and sent home, with advice to follow up with an eye doctor. One nurse also advised me to file a police report,” she wrote, describing a very disturbing situation.

Then she ended with a plea for people to be like her, and get involved. by ending with:

“If you really want to help, I would ask that you find ways to participate in or support the BLM movement. Donate to volunteer medical services, or organizations supporting protesters. Sign petitions, speak out. Support Black-owned businesses and support Black moms and dads, who have been part of the Wall of Moms for generations and continue to fight.”

A 41 year-old mother of 3 shot in the head by Trump’s storm troopers in Portland. You can read her full story here: https://t.co/FjFWI7IPyU pic.twitter.com/c41MDkrcIU

She is a hero to white aging radicals, however, she is still viewed as not having done enough for Blacks by some activists:

This is Kristen Jessie-Uyanik, the “mom” injured at a “peaceful” Portland protest. This Turkish-American loves BLM. However, her friends’ list reveals she only has 2 Black friends! Perhaps her time would be better spent protesting at the Turkish embassy against Armenian genocide. pic.twitter.com/xYu42PiO1T

Sodaro is 55-year-old career activist with a long criminal record. She has numerous criminal charges against her.

According to local Denver News, “The woman arrested for assault during the dueling pro and anti-police rallies at Civic Center Park Sunday afternoon is accused of grabbing the victim by the hair and throwing her to the ground, according to an arrest affidavit obtained by 9NEWS on Friday.

Caryn Sodaro, 55, faces an assault charge for the incident, which the affidavit says left the unidentified victim with a bloody nose and scraped knee.

Colorado Bureau of Investigation records show she was arrested as recently as late May for a curfew violation during the Black Lives Matter protests, and the Associated Press reports that she spent multiple weeks in jail for pleading guilty to making anonymous suicidal calls to emergency crews in Weld County while working as a volunteer firefighter.

According to the Colorado Bureau of Investigation (CBI) records, over the past 10 years Sodaro has pleaded guilty to bribery, attempting to influence a public servant, trespassing, obstructing a police officer, and misdemeanor assault.”

Here Sodaro is shining a Lazer in the eyes of Police officers Sunday night.

She has a long criminal past.

Love is 32 years old and barely escaped violence in Seattle late in June af a different riot, and was hit while dancing on a Freeway in Seatle, blocking traffic with their bodies.

Diaz possibly be paralyzed, can’t wait to get back into the grid of protesting.

She plans to return to rioting:

“As soon as I get out of here and get in a … wheelchair, I’m going to be on the marches with you,” Love told the crowd.

Love, of Portland, Oregon, suffered a traumatic brain injury, a shattered pelvis and tailbone, a broken arm, and three fractures to a leg. Love said the recovery from the injuries is expected to be a long one.

Suspect in fatal hit-and-run at #BlackLivesMatter freeway protest in Seattle pleads not guilty; survivor #DiazLove vows to return to the marches in a wheelchair- @ABC News https://t.co/5n4gHsWoMM

Here is Diaz doing Community Organizing from her hospital bed telling people her ideas for more riots and marches:

Seattle, I’ve got news for you! The protests never ended! YOU may have stopped showing up but we are still out here fighting for our black and brown allies! Please join us in OUR STREETS, we need all the support we can get!

The woman Diaz Love, was with Summer Taylor died from her injuries, and their protests on the highway caused the disaster for an East African man, who now faces legal fees and federal criminal charges, for driving on the highway.

Gender non-binary white person killed by an East African man at what was called a "Black Femme March" in Seattle… really sums up the "current moment" pic.twitter.com/1Lt00NZdJ5

Even while lying in pain, Love can not stop thinking of joining more protests and riots.

Summer Taylor and Diaz Love were rushed to the hospital in critical condition. Summer passed away later that day. pic.twitter.com/CjcHMPeEvG

She had previously been involved with the violent death of a young black man in Seattle. That is two black men whose lives are destroyed by BLM organizing and rioting.

Video of Diaz Love who lived at Chaz/CHOP condoning shooting and killing one black 16yo and putting one 14yo in the hospital. I'm sorry but this woman is crazy. Not only is she condoning killing kids but she's illegally protesting on I-5. https://t.co/QPGxJEt7Ms

This is footage of the night Love was struck, and Summer was killed.

A crowd of Seattle protesters were dancing and doing the cupid shuffle on I-5. Moment later, two of the protesters were hit by a car and sent to the hospital, Diaz Love had serious injuries, while Summer Taylor died #SummerTaylor #DiazLove #SeattleProtest pic.twitter.com/TNaYEfMb0U

That East African man who didn’t know the Highway was shut down for people to dance in the streets.

Dawit Kelete is the driver that killed Summer Taylor and put Diaz Love in a hospital fighting for her life. I don’t care what race he is. Murder is murder and he knew what he was doing. Give him the max. pic.twitter.com/XGuVNrRulS

Three White Women who love rioting and two Black Men destroyed. That is the tragic tale of the “Summer of Love”, Radical liberal White Women throw away a lifestyle people cross oceans to get.

ICYMI: The driver who is accused of hitting two protestors on I-5 this weekend faced a judge yesterday. Dawit Kelete is now being held with a $1.2 million bail. Summer Taylor later died from injuries, and Diaz Love is recovering in the hospital. #KOMONews #seattleprotests pic.twitter.com/OK62ChlVvn

The post Three Radical Left White Women who Have Destroyed Their Lives for BLM appeared first on The Beltway Report.