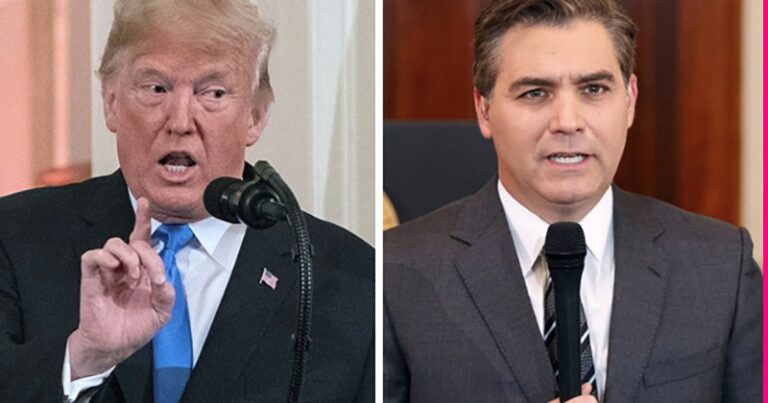 Acosta had penned a report for CNN on Wednesday titled “Trump still not grasping the severity of the pandemic, source tells CNN,” which we assume he was talking about.

The story claimed that an anonymous source on the White House coronavirus task force accused the president of not grasping the severity of the pandemic.

“He still doesn’t get it,” the anonymous source allegedly said to CNN. “He does not get it.”

A source familiar with Trump’s Tuesday Oval Office meeting with his coronavirus task force said the president is still not demonstrating that he has a firm grasp of the severity of the pandemic in the US.

The White House disputed the source’s account of the meeting, with communications director Alyssa Farah saying: “The President is highly engaged on the fight to defeat Covid and well briefed on the virus.”

“He’s leading our nation through this crisis and we’d point to the tens of millions of tests we’ve produced, the massive advancements on therapeutics, and our race toward a vaccine,” she said in a statement.

But the source said Trump’s mood was noticeably less jovial during the meeting. In past task force meetings with Trump, the source said the President appeared to be in a much more jocular mood. That was not the case in the Oval Office on Tuesday evening.

“@CNN has no sources on the Task Force,” the president said. “Their ‘sources’ are made up, pure fiction! Jim Acosta is a Fake reporter!”

.@CNN has no sources on the Task Force. Their “sources” are made up, pure fiction! Jim Acosta is a Fake reporter!

The CNN public relations department responded quickly to the tweet by the president in defense of Acosta.

“False. @Acosta is a Real reporter with Real sources who talks to members of your Task Force much more often than you do,” it said.

False. @Acosta is a Real reporter with Real sources who talks to members of your Task Force much more often than you do.

Putting forward a motion to nickname him Dim Acosta going forward… All in favor raise your hand.

The voices inside their heads don’t count as sources?

Jim Acosta is not a good journalist. He knows how to play the game and get attention but screaming at press conferences and citing “a source familiar with the meeting” is not good journalism by any standard except for maybe CNN’s.