Video: Antifa Shows Up at Pro-Cop Rally … Quickly Learn They Have Made A Terrible Mistake 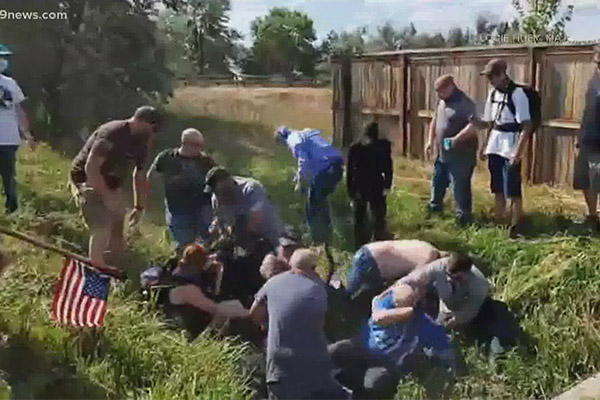 Opinion| Antifa decided they would disrupt a rally for the police in Ft Collins, Colorado but found out what everyone else already knew. Antifa is a bunch of cowards. The only person they dared attack was a man in a wheelchair that led to a fight in which antifa got a royal beating.

When Antifa showed up it did not thrill the protesters fighting for Defend the Blue and instead of disrupting the police rally, attendees began moving Antifa out of the neighborhood and Antifa seeing the odds were equal, mildly allowed themselves to be moved.

Suddenly Antifa began attacking a man in a wheelchair and all hell broke loose for a few minutes and things were just calming down when the police arrived and arrested three people. No information on which side the ones arrested was on.

“We respect everyone’s right to peacefully assemble to voice their concerns. For the safety of our community, acts of violence, destruction of property and other unlawful behavior will not be tolerated.”

More cities need to stand up to these domestic terrorists and must be willing to meet them head-on with whatever means is necessary to drive them from the cities. Even in Portland and Seattle, they can outnumber Antifa 100 to 1. Your mayors aren’t going to do it for you. With such a show of strength, no violence would be necessary.

There has been too much violence already and we don’t want more. But showing sufficient numbers would discourage these thugs and no violence would be necessary. They riot now because mayors like Ted Wheeler and Jenny Durkan give them the all-clear to do whatever they wish.

A Coloradoan reporter who attended and photographed the rally Saturday noted that the mood of the rally became tense when a group holding Black Lives Matter signs set up across Timberline Road from the rally gathered at FCPS headquarters, 2221 S. Timberline Road.

The Coloradoan’s reporter did not witness the violence that spun off the rally, as it occurred blocks away from the main gathering along Timberline.

The post Video: Antifa Shows Up at Pro-Cop Rally … Quickly Learn They Have Made A Terrible Mistake appeared first on The Beltway Report.